Comments By Dr. Marc Arazi (France), President And Co-Founder “Alerte Phonegate To The Peer Review Of The NTP Study 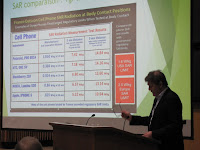 I am here as a French physician who has spent the past years studying the consequences of electromagnetic fields on health.

Our new organization, “Alerte Phonegate”, has been created as a public educational institution. People have the right to know how to buy and use mobile phones as safely as possible.

We wrote with Dr Devra Davis on the 22 of March to the regulatory agencies (FCC), asking them to soon revise their standards for a better protection of human health.

First of all, we would like to thank the scientific NTP team for the quality and interest of this study.

Your choice to use high SAR levels is particularly interesting because in the scientific literature, few studies have been done in this regard.

We find your results concerning the effects on many organs (heart, liver, pancreas, thyroid, etc…) particularly important in understanding the risks related to radiofrequency waves on the whole body, not only on the brain.

Our comments today will be restricted to the question of exposures that were used in the NTP study and how they relate to recently released data from the French government national frequencies testing agency.

In July 2016, the French National Agency for Food, Environmental and Occupational Health and Safety (ANSES) published an important report entitled, “Exposure to Radiofrequencies and Child Health”.

After several legal actions of our group, ANFR had to publish on its DATA site the complete reports of 442 cell phones tested until 2017.

These results show that the leading mobile phones sold in France as well as Europe exceed the regulatory limits.

All this was made possible by inappropriate regulation that allowed mobile phones to be tested at a distance of 15 to 25 mm from the skin.

And just yesterday a commitee of 40 scientific experts of the French agency ANSES confirms in a new report that electro sensitivity is a real illness touching nearly 5% of the population. It is necessary to verify if there is a link between this overexposure of cell phones during more than 20 years and the apparition of the sickness

In June 2016, at the initiative of France, the European Commission adopted a cautionary notice for manufacturers, asking them to test the SAR extremities at 0 mm and the SAR trunk at a few millimeters without any upper limit.

Moreover, as you know, the European standards are less strict than the American standards adopted by the FCC in 1996.

If we take into account only the differences between 1 g and 10 g to calculate the SAR, a mobile phone tested at 7 W/kg by ANFR would have a SAR almost three times higher, 20 W/kg for 1 g of tissue, and nearly 15 times the legal threshold allowed in the U.S.

There is also the question of exposure time both in the calculation of the SAR and in the choice for this study of alternating 10 minutes of exposure and 10 minutes without exposure.

Indeed, if the objective of the study is to investigate whether the waves of the mobile phone pose a risk to human health, it seems necessary to focus on realistic uses made by users.

For example 20% of teenagers keep their active phone in their pocket more than 10 consecutive hours a day and 12% say they also keep it under the pillow at night.

So if indeed, it is difficult to compare the whole body SAR levels of your study and those of the SAR body and extremities, you will readily agree from the revelations of ANFR’s test measurements that it’s no more possible to say that humans are less exposed than rats and mice. Even more !

So I’m here, after traveling 4000 miles from France to ask Dr Bucher, face to face to clarify his comment, when he added to the media that he would not change anything for himself or for his children or grand children regarding their habits of mobile phone user

In having now the information about the French national tests, would you make the same comments which could undoubtedly have serious consequences in terms of public health, especially in delaying simple measures of protection for billions of users?

And I will finish with this simple advice : Distance with you cell phone is your best friend

Thanks and take safe