"Other environmental factors, such as the ubiquity of glyphosate in food, air, water (and vaccines) and young people’s immersion in a wireless-saturated environment also merit close attention and an immediate response."

Millennials Besieged by Chronic Illness: From Age 27, It’s All “Downhill”
By the Children’s Health Defense Team, childrenshealthdefense.org, 14 May 2019 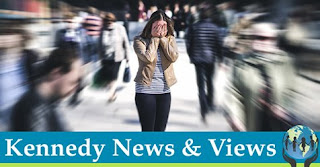 NOTE: There can be no denying that America’s children and young adults are at a critical juncture. Unless we start admitting what we already know about environmental culprits and become willing to do something about them, children, young adults and our nation are going to continue to get short-changed.

Millennials (the generation born between the early 1980s and approximately the mid-1990s) just got some bad news. Health insurance data from 2017 show that many of them, especially older millennials in their mid-30s, are facing unprecedented levels of mental and physical illness.

According to a report released in April by the Blue Cross Blue Shield (BCBS) Association, millennials’ sharp decline in health begins around the tender age of 27 and stands in stark contrast to the health of the preceding generation—Generation X, born in the mid-1960s. For eight of 10 health conditions, millennials are experiencing double-digit increases in prevalence compared to what Gen Xers experienced at the same ages. Although four out of five millennials, ironically, perceive themselves to be in “good” or “excellent” health, both the BCBS report and a 2016 Harris Poll survey put the lie to these perceptions. In the survey, over half (54%) of millennial respondents reported having been diagnosed with at least one chronic illness.

Interestingly, a national survey of children’s health conducted in 2007 produced exactly the same result as the Harris Poll for children ages 0-17: 54% of surveyed children had one or more chronic health conditions. The preteens and teens who participated in the 2007 survey fall squarely into the millennial time frame and would have been in their 20s when BCBS conducted its 2017 analysis. For anyone following America’s dismal child health trends over time, the news about millennials’ health can hardly come as a surprise.

BCBS analyzed data for 55 million commercially insured millennials—representing about 75% of all millennials in the United States. Using a measurement tool called the BCBS Health Index, BCBS considered the “reduction in future healthy years” due to various chronic health conditions.

In addition to highlighting the strikingly poorer health of millennials compared to Gen Xers, the BCBS report noted the following:


Another BCBS report (released in May 2018) examined major depression in millennials and adolescents. That study, which described major depression as “the second most impactful condition on overall health for commercially insured Americans,” reported a 47% increase in depression diagnoses in millennials and a whopping 63% increase in adolescents—especially teenage girls—from 2013 to 2016. Among those diagnosed with major depression, 85% had one or more additional health conditions.
Although the BCBS report on millennials does not specifically mention anxiety disorders, the 2016 Harris Poll survey found that anxiety disorders were one of the three most common diagnoses among millennials. Fourteen percent reported an anxiety disorder diagnosis in that survey, and nearly one-fourth (23%) reported being diagnosed with any mental illness. In fact, anxiety is a prominent enough affliction for this generation that some writers have half seriously proposed renaming millennials as “Generation Anxious.”

The BCBS report focuses on the impending macroeconomic impact of millennials’ declining health, pointing out that they will soon be the largest generation in the American workforce. According to BCBS, millennials’ health status “will likely have substantial effects on the American economy over the next two decades—including workplace productivity and healthcare costs.”

Equally sobering are the individual financial and quality-of-life implications of so much chronic illness at such young ages. For example, millennials carry more medical debt than older Americans “and incur it more frequently.” A news account discussing millennials’ escalating rates of formerly rare illnesses such as colorectal cancer and multiple sclerosis describes the phenomenon as “life interrupted”:

Life in your 20s and 30s is challenging enough with forging career paths, buying your first home, falling in love and deciding if you want to start a family without adding a chronic health condition to the mix. Unfortunately, there is a growing number of millennials whose lives are interrupted by chronic illness.

What is BCBS’s proposed response to the millennial health crisis? The insurer plans to conduct “Millennial Health Listening Sessions” to identify health care system fixes. A more necessary first step, however, is to call out the environmental factors that are undoubtedly at the root of the several-decades-old children’s health crisis that is now unfurling into young adulthood.

Vaccines represent one group of obvious suspects, particularly if one recognizes that the millennial generation’s arrival on the scene roughly coincided with the end of manufacturer liability for childhood vaccine injuries and the beginning of the rush to pile ever-more vaccines onto the childhood schedule. Other environmental factors, such as the ubiquity of glyphosate in food, air, water (and vaccines) and young people’s immersion in a wireless-saturated environment also merit close attention and an immediate response.

There can be no denying that America’s children and young adults are at a critical juncture. Unless we start admitting what we already know about environmental culprits and become willing to do something about them, children, young adults and our nation are going to continue to get short-changed.

Sign up for free news and updates from Robert F. Kennedy, Jr. and the Children’s Health Defense. CHD is planning many strategies, including legal, in an effort to defend the health of our children and obtain justice for those already injured. Your support is essential to CHD’s successful mission.