As the controversy over 5G networks and cell phone radiation continues, it turns out that manufacturers aren’t playing fair. In a groundbreaking expose by the Chicago Tribune, popular phones by Apple, Samsung, and Motorola were found to produce radiation that exceeds federal limits. The new data has forced the FCC to investigate – and could be a major blow to the industry.

The question has been asked about as long as mobile phones have existed: “Are they safe?”

Manufacturers and service providers have assured us time and time again that radiofrequency radiation is nothing to worry about, but the Federal Communications Commission (FCC) did eventually set limits.

For a cell phone to be approved for sale, it must undergo FCC-approved testing to determine the amount of radiofrequency radiation that will be absorbed by organic matter. This gives us an idea of just how much radiation users will experience, day in and day out. The current limit for cell phone radiation is 1.6 watts per kilogram.

1.6 W/kg. Keep that number in mind as we continue…

Journalists at the Tribune wanted to know if this threshold was truly being observed by manufacturers, so they funded their own testing to find out. They began with Apple’s iPhone 7. The test was conducted at a lab accredited by the FCC to perform the tests according to federal guidelines.

To conduct the tests, phones were placed under a tub containing liquid that simulates human tissue. The phone was then powered on and a call was placed so that it was operating at full power. For the next 18 minutes, a robotic sensor took over 275 measurements.

The phone was tested twice, once at 5 millimeters away from the liquid and once at 2mm away. The second test, they explained, was to simulate a phone being stored in clothing, like pockets. They measured this by cutting out pieces of dress shirts, T-shirts, jeans, track pants, and undergarments and using them to find the appropriate distance.

The Tribune reports that the results of the first iPhone 7 test were so high that they wanted to test two more to be sure.

The results were staggering. 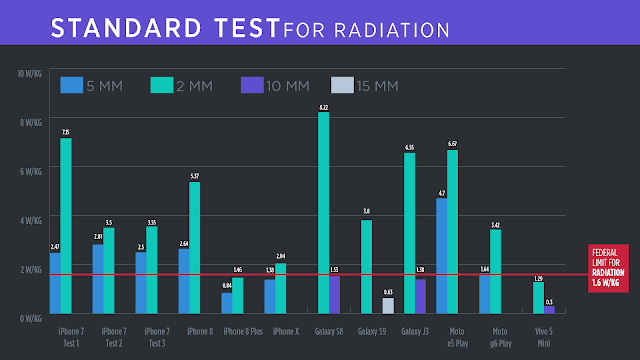 With a federal limit of 1.6 W/kg, nearly half of the phones failed the test at 5mm. At 2mm, representing a phone kept in your clothing, all but one failed. If the tests are accurate, this would be a catastrophic failure of FCC oversight, and severe ineptitude or diabolical deceit by the manufacturers (except Vivo, who was well within guidelines).

Apple, understandably, was not happy with the results. After receiving the report, they complained that the results were invalid because they were not performed properly. They failed to specify the problem, but the Tribune decided to repeat tests on the iPhones, this time activating sensors meant to reduce power during use. They added a 4th iPhone 7 so there could be no mistake.

Still, the results were disturbing. 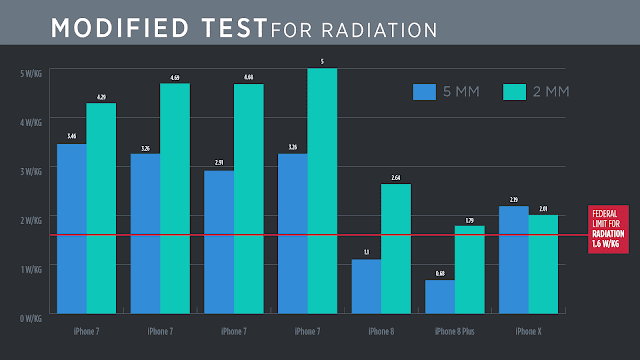 While the scores generally dropped, 6 of the 7 Apple phones failed to meet radiation standards at 5mm. At 2mm, every single phone manufactured by Apple produced radiation above the legal limit.

The FCC has approved all of these phones and claims that they will “never exceed” radiofrequency radiation of 1.6 W/kg. Clearly something is wrong. To avoid any kind of scrutiny, the Chicago Tribune used RF Exposure Lab, located in San Marcos, California. The lab is accredited by the FCC to conduct these tests and has been conducting radiation tests for FCC approval for nearly 15 years.

Owner and former engineering director for Qualcomm Jay Moulton conducted the tests personally, ensuring that they met all FCC standards.

But when it comes time for companies to prove that their products are safe, the system is deeply flawed. Manufacturers get to choose their own labs for testing, which leaves room for at least the appearance of impropriety. Additionally, manufacturers are allowed to test the phone as far away as 25mm, or about an inch. Tribune author Sam Roe speculates that this is due to timing.

The testing standards were adopted in the 1990s, when people frequently carried cellphones on belt clips,” he wrote.

For the tests conducted by the Tribune, phones were tested at the same distances reported by the manufacturers. Apple claims that their tests are conducted at 5mm. Samsung phones are tested at 10mm or 15mm, depending on the model. And while the 2mm distance was closer than the FCC requires, it may be the distance most accurate when it comes to the way people store cell phones.

7 years ago, the Government Accountability Office recommended that the FCC revisit the testing requirements and exposure limits. They specifically mentioned that, because phones are most often held against the body, it was impossible for the current testing to demonstrate that cell phone radiation levels were within the federal limit.

Earlier this month, the FCC announced that the standards were sufficient and did not need to be changed. But these guidelines were established back in 1996.

This was just after we were married and before losing Ty’s dad to dangerous cancer treatments. Few people had cell phones back then. The phones that were around were bulky and had poor battery life. No one texted, and the idea of children owning or using cell phones was absurd.

To put things in perspective, the Nokia 3310 (the phone you played “snake” on) was first launched on September 1st, 2000. The way people used cell phones in 1996 is absolutely nothing like the way we use them now. Even the current testing methods exclude eyes and ears, which may be most vulnerable to the effects of radiation. Still, the FCC has done nothing.

But the new data discovered by the Tribune cannot be ignored. After receiving a copy of the report, the FCC agreed to conduct their own testing to determine if the phones are not in compliance. “We take seriously any claims on non-compliance with the RF (radiofrequency) exposure standards and will be obtaining and testing the subject phones for compliance with FCC rules,” FCC spokesman Neil Grace said.

Wheeler’s predecessor, Julius Genachowski, took a lucrative job with The Carlyle Group (an asset management company working with telecom and media companies) after leaving the FCC. And the current commissioner, Ajit Pai, is no better. A former Associate General Counselor for Verizon, Pai immediately tried to overturn net neutrality rules – a top priority for his former employer.

Pai’s FCC has helped to establish laws and rules that prevent states, cities, and counties from regulating technology companies for health and safety reasons. This is likely to help fast track the new 5G networks that have already been deployed in select cities.

Although no safety studies have been conducted on 5G radiation in the U.S., research compiled by the European Union has found health risks, including cancer. Dozens of cities, towns, and even nations have seen major pushback from their citizens, citing the health risks.

When it comes to the technology we already have, it seems the game is rigged. Antiquated guidelines established at the dawn of the cellular age are still in place. Regulators, in bed with the industry, are making concessions designed to help the wireless industry. And now it seems that cell phone manufacturers themselves have been scamming us.

Sure, it’s possible that these results are an anomaly, and that the phones in question are within the FCC radiation limits. But it’s unlikely. Nearly all of the Apple phones failed – even with the newer test. Samsung’s Galaxy S8, which sold over 5 million units in its first month, had radiation levels more than 5 times the legal limit.

Our system is broken, and it seems that regulators need to have the evidence spoon-fed to them in order to even look into it (just look at the new evidence regarding fluoridated water).

So, what can we do? We can write our elected officials, who are responsible for nominating and confirming the industry-friendly regulators. But there are other steps we can take:

#1. Turn off your phone when not in use.

#2. Never store your phone in pockets or other clothing,

#4. Avoid using your cell phone in the car or other vehicles.

#5. Use the speaker or regular headphones whenever possible so your phone is not pressed against your body.