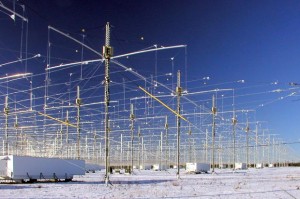 What is HAARP?   The official story is: “The High Frequency Active Auroral Research Program (HAARP) is an ionospheric research program jointly funded by the US Air Force, the US Navy, the University and the Defence Advanced Research Projects Agency (DARPA). Its purpose is to analyse the ionosphere and investigate the potential for developing ionospheric enhancement technology for radio communications and surveillance purposes”. The largest legal AM radio antenna in North America is 50000 watts. HARRP is 72000 x 50000 AM radio antennas!

What do they need all this power for?

In his interview, Barry Trower, microwave weapons expert, mentioned how HAARP could be used in micro-biological warfare. . “It is so easy now to bring total devastation and economic ruin to any country by microwaving it and bringing the [toxic] bacteria to life,” he said. (See Part 4 of the interview.)


Wake-Up World published an article entitled, “HAARP, Weather-Altering, Earthquake-Making Machine?” that sends a scary message. One of the videos in the article, “Feb 2011 – Christchurch NZ Earth Quake – Another HAARP Event?” shows that HAARP does a lot more than communication and surveillance.

“Only a small percentage of the military’s atmospheric modification projects are visibly obvious. What we can’t see is equally dangerous. The ionosphere, the earth and its inhabitants are continually bombarded with high frequency microwaves used to manipulate the charged atmosphere for weather modification, information gathering and for tectonic (earth-quake-producing) weaponry. Independent chemtrail researcher Clifford Carnicom confirms that we are also continuously subjected to extremely low electromagnetic frequencies (ELF) pulsing at 4 hertz multiples, frequencies known to profoundly affect human biological and mental functioning.”


The video shows the seismic readings prior to and during the 6.3 magnitude earthquake which occurred near Christchurch, New Zealand, in February 2011, causing billions of dollars in damage. What would be the financial gain from selecting a heavily populated area where the most damage could be caused? There are eye-witness accounts of man-made, HAARP “rainbow-, oily-residue-type” clouds following the 2011 earthquake in Chile (magnitude 7.1). Could underwater HAARP activity have caused the beaching of whales, half of whom died (107 whales) where the 2011 New Zealand earthquake occurred?

“Top-secret HAARP antenna farms exist below and above the ground.” Could this explain the acceleration of earthquakes occurring in the last few years?

In the video, some screen-shots were taken of HAARP graphs, if you would like to monitor these in real time, they can be found here.