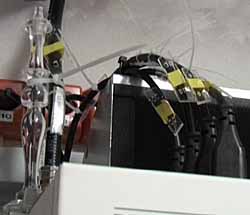 In addition to reading the two articles about BioGeometry which follow, view this video: "Hemberg Swiss project on Reuters" where Dr. Ibrahim Karim, an Egyptian architect and founder of the science of BioGeometry, talks about how biogeometric shapes were used in the Swiss village of Hemberg (canton St. Gallen) to alleviate the effects of mobile phone antenna emissions on people and the environment. He says that this could not be due to a placebo effect because the “ecology” improved once the geometrical forms were placed: birds and bats returned to the village and people felt better. Also read this document about the experiment:  http://www.scribd.com/doc/121266793/Ibrahim-Karim-Harmonization-With-Biogeometry-Mobile-Radiation-in-Hemberg

Following the success of this project, Dr. Karim was commissioned by the local government of the Swiss town of Hirschberg to implement a similar solution there. The energy-quality balancing of BioGeometry eased the symptoms of electrosensitive persons, among a number of other health conditions, as well as positively impacting the overall ecology of the area, including the health of the livestock in the area.

"BioGeometry energy-quality balancing solutions have been shown effective in multiple scientific and medical projects conducted in Egypt and throughout Europe, including The Egyptian National Research Centre and The Egyptian National Hepatitis C Research Project. It is currently being applied to architecture, telecom networks, industrial design, boats, airplanes and many other fields to transmute the effects of environmental energy disturbances from sources such as electro-magnetic radiation, structural design, and cosmic & earth-energy radiation. BioGeometry has also been successfully applied in agriculture, poultry, fish, and livestock farming to increase productivity and quality, while eliminating harmful artificial additives and treatments." (Ref: http://www.vesica.org/biogeometry.)

Dr. Karim recently relocated his family from Cairo to Montreal. For more about BioGeometry you may view Dr. Karim’s website: http://www.biogeometry.com/english/prof.php

In June 2002, Swisscom installed a 710 Watt Mobile phone antenna in the church tower of the small city Hemberg in Switzerland. Since then two dozen citizens are complaining of headaches, dizziness, sleep disorders and fatigue. Birds and bats moved away. The antenna is to blame.

On August 6 2003 was announced that the authorities have started a project in agreement with the persons concerned and Swisscom to solve or release the problems with BioGeometry.

According to Ibrahim Karim there were a lot of environmental problems in Hemberg. A lot of earth radiation is found, a lot of electrical installations in the low frequency range, and there is the mobile antenna. In his view it is difficult to find cause of the disturbance among these many effects and investigating the reason is not the goal of the project. It is more important to help the people.

After analyzing the situation and discussions with the concerned parties, Dr. Karim installed geometrical forms on the electric cables of the antenna in the church as well as inside the homes of the affected people. The antenna was chosen as main conductor of biogeometrical energy, because a huge influence can be achieved using it.

The evaluation on 22 October 2003 during a TV discussion can be summarised as follows:

1. The first results according to the affected people are positive. The people now sleep better, have fewer headaches, are less aggressive, and have more energy. They also say that the birds and bats that moved away for a year, did return.

2. The president of "Gruppe Hans-U. Jakob" claims that "Swisscom has reduced the power of the antenna, to make the people feel better. Swisscom are cheating intentionally. They manipulate to prove their point.”

3. Claude Georges of Swisscom Mobile responds by saying “We did not manipulate and we never exceeded the allowable power and we can provide the documents to prove that

Anyhow, the people in Hemberg feel themselves now much better. An evuation in 2005 shows that the people still are very positive about the results. (Tagblatt in Switzerland of 8 April 2005).

What is ElectroSmog?
from BioGeometry

“When we interact with a computer or a cellular phone, the electromagnetic fields produced by the device are a thousand times more than the energy of our cells. It is like how information carried in a breeze will be distorted by a storm. Our biological energy fields will be disturbed and our immune system will be less effective. If at the same time a balancing geometrical shape as part of the design of the device or separate is introduced in our energy field, it will restore its balance. The BioGeometric design of the device will make it “human-friendly” so to say. You will actually feel better using it.” – BioGeometry Q&A

Miracle of Hemberg, Switzerland
from BioGeometry

“A pilot research project under the patronage of the Swiss Mediation Authority for Mobile Communication and Environment (MAMCE), and in collaboration with leading governmental telecom provider Swisscom, implemented BioGeometry energy-quality balancing to remedy ailments of electro-sensitivity in the rural town of Hemberg. BioGeometry® was successful in eliminating the ailments of electro-sensitivity, among a number of other health conditions that it remedied, as well as positively impacting the overall ecology of the area. Media coverage, supported by official releases by the MAMCE and an independent study of the project, dubbed the results “The Miracle of Hemberg.” In a Swiss television interview with the Mayor and residents of Hemberg almost two years later (Sept. 2005), the sustained energy-quality balancing effect of BioGeometry was confirmed.” – BioGeometry Research Project

Miracle of Hirschberg, Switzerland
from BioGeometry

“Following the success of the first Swiss BioGeometry project in Hemberg, Dr. Karim / BioGeometry Energy Systems Ltd. was commissioned by the local government of the Swiss town of Hirschberg to implement a similar solution there. The project was documented by Swiss TV Channel 1 (SF1), and the documentary aired on prime-time TV in Switzerland showing how BioGeometry was successful in eliminating the ailments of electro-sensitivity, among a number of other health conditions that it remedied, as well as positively impacting the overall ecology of the area. The overwhelming positive impact of BioGeometry energy-quality balancing on the health of the livestock in the area, (an important economic factor to this rural town, was remarkable. The documentary referred to the successful project as “Electro-smog: The Miracle of Hirschberg.” – BioGeometry Research Project