Sweden: The Man Who Was Allergic to Radio Waves: Testimony of Electrohypersensitivity 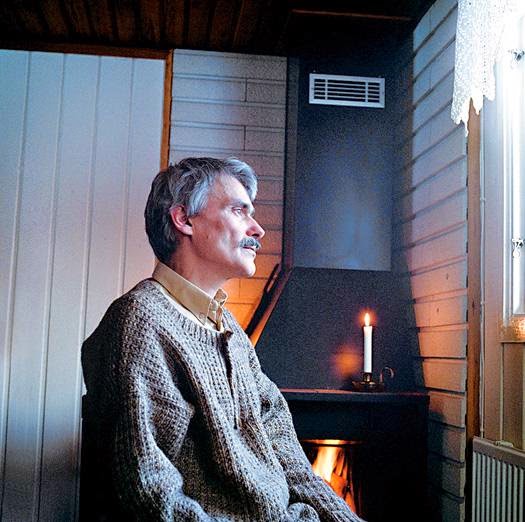 This is an excellent testimony of electrosensitivity from a former telecommunications engineer who worked for Ericsson.  We have published here only his testimony.  The rest of the article discusses the issue of electromagnetic radiation in depth.

The Man Who Was Allergic to Radio Waves
by James Geary and photographer Jonathan Worth, popsci.com, February 2010

Your cellphone does not in itself cause cancer. But in the daily sea of radiation we all travel, there may be subtler dangers at work, and science is only just beginning to understand how they can come to affect people like Per Segerbäck so intensely

Per Segerbäck lives in a modest cottage in a nature reserve some 75 miles northeast of Stockholm. Wolves, moose and brown bears roam freely past his front door. He keeps limited human company, because human technology makes him physically ill. How ill? On a walk last summer, he ran into one of his few neighbors, a man who lives in a cottage about 100 yards away. During their chat, the man's cellphone rang, and Segerbäck, 54, was overcome by nausea. Within seconds, he was unconscious.

Segerbäck suffers from electro-hypersensitivity (EHS), which means he has severe physical reactions to the electromagnetic radiation produced by common consumer technologies, such as computers, televisions and cellphones. Symptoms range from burning or tingling sensations on the skin to dizziness, nausea, headaches, sleep disturbance and memory loss. In extreme cases like Segerbäck's, breathing problems, heart palpitations and loss of consciousness can result.

A cellphone has to be in use -- either making or receiving a call, or searching for a signal, when radiation levels are highest -- for it to have this kind of effect on Segerbäck. Phones that are on but neither sending nor receiving usually don't produce enough radiation to be noticeable. But it's not the sound of the phone that sets him off. Once, while on a sailboat with friends, he recalls, he was on the front deck when, unknown to him, someone made a call belowdecks. Headache, nausea, unconsciousness. When Segerbäck is within range of an active cellphone (safe distances vary because different makes and models produce different radiation levels), he experiences the feeling that there is "not enough room in my skull for my brain."

Sweden is the only country in the world to recognize EHS as a functional impairment, and Segerbäck's experience has been important in creating policy to address the condition. Swedish EHS sufferers -- about 3 percent of the population, or some 250,000 people, according to government statistics -- are entitled to similar rights and social services as those given to people who are blind or deaf. Today, local governments will pay to have the home of someone diagnosed with EHS electronically "sanitized," if necessary, through the installation of metal shielding.
…

Segerbäck was once an elite telecommunications engineer. He worked for Ellemtel, a division of the Swedish telecom giant Ericsson, for more than 20 years, leading an engineering group that designed advanced integrated circuits for prototype telecommunication systems. He used the newest and most advanced computer and telecom equipment available, the kind of stuff only Ericsson and the Swedish military had access to. He was, as a result, up to his eyeballs in a non-ionizing radiation bath, from computers, fluorescent lights and the telecom antenna located right outside his window.

He noticed his first symptoms -- dizziness, nausea, headaches, burning sensations and red blotches on his skin -- in the late 1980s, a decade into his telecommunications research work. All but two of the 20 or so other members of his group reported similar symptoms, he says, although his were by far the most severe. His EHS worsened and now, he says, even radar from low-flying aircraft can set it off. Segerbäck is convinced that the perfect storm of EMFs in his office, combined with potentially toxic fumes from his brand-new computer, were responsible for his condition. "The company doctors didn't understand what was going on," he says.

Agne Fredriksson, who managed Segerbäck's group at Ellemtel and retired from Ericsson in 2006, says a commonly reported symptom was "a feeling of heat in the face," which everyone attributed to the new computer workstations. When members of Segerbäck's group started calling in sick and people from other departments began reporting similar symptoms, Fredriksson recalls, "that's when we started to look into what could be done about it. There was a lot of worry from the groups in which people reported the most symptoms."

A new office space was created for the worst-affected employees; about half a dozen people shared this fully shielded room. Others switched to different computer workstations, while others managed by spending less time in front of their screens. No one had ever encountered anything like it before. "Why are we so special?" Fredriksson remembers wondering. He later learned that other companies faced similar situations at the time, although that information remained internal.

Ericsson went to great lengths to keep Segerbäck, a key member of the firm's design team, on the job. In the early 1990s, the company installed metal shields around his bedroom and study at home so he could sleep and work without radiation exposure. To enable him to go outside, medical authorities gave Segerbäck an EMF-resistant suit like the ones worn by engineers working in close proximity to live telecom towers and high-voltage power lines. The firm even modified a Volvo so he could travel safely to and from work. His commutes ended when cellphone towers began to spring up around Stockholm in the mid-1990s, eventually forcing his retreat to the woods.

In 1993 Ericsson produced a report, "Hypersensitivity in the Workplace," about what happened at Segerbäck's lab. In the foreword, Ellemtel's vice president Örjan Mattsson and administrative chief Torbjörn Johnson wrote: "A new problem in the work environment has appeared: hypersensitivity. When dealing with traditional occupational injury, as a rule you can establish a cause and effect relationship. Not so with regard to hypersensitivity. When the first serious cases occurred at Ellemtel at the end of the 1980s, we were not prepared. Soon, we came to look upon hypersensitivity as a serious threat to the company business. . . . We started wondering if we were faced with a modern-day scourge."

A year later, Ericsson closed the lab in which Segerbäck and his group worked. The company dismissed Segerbäck in 1999. "He could not perform the work he was employed to do," according to an Ericsson spokesperson. Segerbäck challenged the dismissal in a Swedish labor court and lost. He admits that there is no way to prove what caused his condition. "It's hard to know what is causing what," he says. "No one can say what made us feel ill." And it is impossible for him to seek treatment in a medical facility. A trip to the hospital, with all its electronic equipment, would probably kill him, he says.

Ulrika Aberg, a Swedish physician specializing in EHS who treated Segerbäck in the early days of his condition, has worked with more than 800 hypersensitive patients. She says she's seen a sliding scale of symptoms, from sleep disturbance and dizziness on one end to the more severe effects experienced by Segerbäck on the other. "There is electrical activity going on in all cells all the time, so it's no wonder the whole body [of an EHS patient] is affected," she says.

For those reporting milder symptoms, Aberg suggests removing any wireless electronics from the home, including cell and cordless phones and wireless Internet connections. But that still leaves people exposed to the wireless devices of others. There are several hundred EHS "refugees" in Sweden, she says, people who have had to move, some more than once, to escape the effects of EMFs. She describes one hypersensitive couple that lives in a mobile home so they can quickly relocate if their symptoms worsen. "EHS is a controversial diagnosis, and many people don't know or care about it," Aberg says. "But many [EHS sufferers] can't feel safe where they live. We shouldn't produce more and more EMFs without taking account of how people react to them."
…

Segerbäck is convinced that cellphones are dangerous. "I'm an engineer, and even I don't know how to design a phone that doesn't affect health," he says. Radiation limits "are all based on thermal effects, and that's wrong." In the early stages of his condition, Segerbäck was still able to lead a fairly normal life. His daughter, Anna, was just a child when he became ill. She used to run ahead of him at home switching off all the lights in every room before he entered. It is everyday family life that Segerbäck misses the most, something as simple as the chat and laughter on the morning drive to school.

Today he cooks all his meals on a wood-burning stove. The fireplace is his only source of heat. He has electric lights, a phone and a computer, but their power source -- a 12-volt battery -- is buried in an underground cellar about 30 yards from his house, far enough away that the EMFs can't reach him. His computer and his mouse are both surrounded by metal plates so no radiation escapes. His neighbors all know about his condition and (with occasional, painful exceptions) know not to carry cellphones near his house.

Segerbäck is surprisingly sanguine about his situation. "Of course it's a very sad thing that happened to me," he says, "but it can only be regarded as an accident. I am a positive person, from a line of very stubborn people able to survive under tough conditions." He is determined, in his affable, soft-spoken way, to gain greater recognition and greater credibility for EHS. Not by banning cellphones -- he's still too much a telecom engineer for that -- but by somehow making cellphones safer. In fact, he even takes some responsibility for being part of an industry that designed devices he now believes are hazardous to people's health. "Guys like me were so far ahead of society," he says. "We didn't know medicine. We didn't think what we were developing could harm anyone. It's hard to admit we've been wrong for so long."