Huawei Finds 5G Heaven in Switzerland With ‘Fitbits’ for Cows 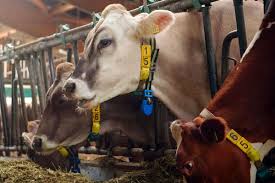 (Bloomberg) -- A quiet Huawei Technologies Co.-led 5G revolution is unfolding at the heart of Europe -- in the bucolic Swiss hamlet of Taenikon.

“You could call it a Fitbit for cows,” said Alexander Lehrmann, Sunrise’s chief of new business development and internet of things, referring to Fitbit Inc.’s fitness device. “It allows farmers to get complete control and insight into their health conditions at any time and from any place.”
While countries in Europe are grappling with U.S. claims that Huawei’s gear could open them up to Chinese spying, Switzerland is quietly building a network with the company. Flying under the radar, the Swiss have become world leaders in the rollout of 5G technology with the early sprouting of private and public networks. Entities from the Zurich airport, the national mail service and railways to food giant Nestle SA and Zurich Insurance Group AG either have or envisage private networks with Sunrise, whose exclusive supplier is Huawei.

“The Swiss government has done a very neutral and objective evaluation of Huawei and they have come to the conclusion that there is no significant other risks included in the technology and in Huawei as a company,” Sunrise Chief Executive Officer Andre Krause said in an interview. “(But) if the reputation of Huawei is continuously under pressure, that could also have an impact on us at some stage.”

The stakes are high as networks move toward the new-generation technology that promises faster connections, enabling uses such as autonomous vehicles, remote surgery and the transfer of data over a network without human-to-human or human-to-computer interaction.

For now, much of what’s happening with Huawei in Switzerland is the industrial use of 5G, or private networks, that draws less attention. But Switzerland is also the first country in Europe to start using a commercial 5G network for individuals in a limited way, amid opposition from environmental and health activists fighting antenna emissions.

The U.S. has been frustrated by Europe’s refusal to accede to Trump’s demands to keep Chinese tech companies out of advanced 5G networks. The U.K., France, and Germany are all looking to keep the door open to the Chinese telecom giant in some way, snubbing the U.S. view that Huawei could be a security risk. Italy, Croatia and Hungary, like Switzerland, have signed partnerships with Huawei.
The Chinese company in February touted as many as 47 commercial contracts for 5G in Europe, more than in Asia. It claims to have 91 contracts, but did not respond to queries seeking details.
Still, the European Union may force member states to eventually change some of the deals after the bloc published a series of security recommendations in its “5G toolbox” that could keep non-European gear makers out of the network core, towers and towers bases.

Switzerland, which is not a member of the European Union, doesn’t face those constraints. Swiss insurers and pharmaceutical companies are testing Huawei’s 5G networks. Huawei has also built a partnership with the Swiss engineering company ABB Ltd., which is seeking to offer industrial partners competitive 5G platforms.

Sunrise’s Lehrmann said banks haven’t yet signed up. He said Sunrise is present in Swiss hospitals, where “the use case is what can you do in order to improve the patient experience by connecting data.”
Swisscom, the former monopoly is also testing the industrial technology but won’t disclose its gear maker. Salt, the Iliad SA-owned Swiss operator, is working with Nokia.

“Radio Network Antennas (the technical name for private networks) are inside offices, factory, hospitals, whatever it is,” Duncan Stewart, Deloitte’s director of research in telecommunications, told reporters in Paris Feb. 4. “The machinery in your factory, the robots, the sensors, the cameras, the turbines, all these IoT devices, will only work on the private 5G networks.”

Stewart forecast that by 2030 almost all companies with more than 10,000 employees may have private 5G networks.

Some other European countries are also testing private networks.

The Port of Rotterdam, Europe’s biggest, has tested the technology starting 2018 with the national telecom operator KPN in partnership with Huawei, according to KPN’s website. Germany has prioritized the expansion of its industrial 5G application too, allowing companies to apply for private networks with gear makers, without necessarily going through a telecom operator. Companies including Bosh in partnership with Nokia, Siemens with Qualcomm Inc. and Volkswagen are building such networks.

To Sunrise’s Lehrmann, the situation is simple.

Customers “are looking at 5G as a technology that allows them to drive new uses and new business cases,” he said.

On the test farm in Taenikon, meanwhile, cows eat, sleep and stroll under surveillance cameras. Their milk production, health and other data are transmitted at speeds about 100 times faster than current networks and processed in real-time. The test is meant to see how remote farms can function, information Sunrise and Huawei can use for other applications to boost factory output, enable big data usage in the finance sector or take health care in hospitals to a newer level.

“The Swiss population and economy depend on high-performance mobile communications,” Sunrise’s Chief Administrative officer Marcel Huber said on his LinkedIn account in February.