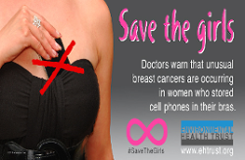 There has not been serious experimental or public health research on the relationship between cellphones and breast cancer in the United States. However, Turkey scientific publications report that breast cancer cell growth quadrupled when exposed them to cellphone radiation. In reviewing the 18-year-old approach to cellphone testing, the US Government Accounting Office noted that phones are not tested as used and recommended more realistic testing scenarios be developed. Modelling studies indicate that phones kept close to the body in the shirt or pants pocket can produce two to six times more microwave radiation than recommended.

The warnings on the iPhone can be found under “Settings” by selecting “General>About>Legal>RF Exposure”. It advises you to use a headset or a speaker-phone during a call, to keep the phone at least 10 mm away from the body at all times, and that cellphone cases (or holders) with metal parts may change the phone’s compliance with RF exposure guidelines in a manner that has not been tested or certified. Unlike most other contents of the iPhone, the text of these RF Exposure warnings cannot be enlarged or copied. Most consumers are completely unaware of the existence of those warnings. Some women tuck cellphones into their bras or their headscarves, and men often carry cellphones in their pants pockets. In addition, some children and youth put cellphones or mobile devices in their chest pockets. BlackBerry and other smartphones have similar warnings, such as, “Don’t keep the phone in the pocket” and “Keep the phone at 2.54 cm away from the abdomen of pregnant women or teenagers.”

Men who want to father healthy children have to be aware: if you take sperm from healthy men and put them in two test tubes, where one test tube gets exposed to cellphone radiation and the other does not, the sperm in the test tube exposed to cellphone radiation die three times faster and have three times more damage in their DNA than the unexposed sperm. There is a growing consensus in the medical community that cellphone radiation is a health problem. According to Professor Stanton Glantz of the University of California, a well-known expert in biostatistics, cellphones clearly do damage sperm, but should not be considered a reliable form of birth control.

I was trained as a Post-Doctoral Fellow at Johns Hopkins University in Cancer Epidemiology and I worked with the US National Academy of Sciences for 10 years directing environmental studies. As director of the Center for Environmental Oncology at the University of Pittsburgh cancer institute, I owned three cellphones and insisted that all the senior staff whom I was working with had to carry a BlackBerry on their bodies so I could reach them then I needed them.

When my first grandchild was at nine months of age, he was able to take a cellphone, turn it on, find a game, and play it. At first I was very proud of him. Inspired by my grandson’s skills with cellphones, I began to look into what we knew about cellphones.

What I found shocked me.

I naively thought that all consumer goods had been adequately tested for safety. However, I discovered that the so-called “safety” of cellphones was based on an extremely outdated paradigm that contradicted cutting edge science. I further realized that the mobile industry used their financial advantage to “war game” scientists whose research revealed that cellphone radiation was associated with increased risk to human health. While reviewing cellphones, I noted a serious problem looming - that there was no more unexposed control group, as most people in the world were using cellphones. I saw from my own research on environmental studies and my own previous work on the war on cancer how long it took for us to take action against tobacco, asbestos and other toxic substances. It took us far too long to reduce people’s cigarette smoking. Although we have finally seen a decline in tobacco death, numerous lives have been sacrificed over decades while the problem was denied and the solution was delayed.

The public needs to understand that a cellphone is a two-way microwave radio. In order for it to receive information it must send signals to the tower for the tower to send signals back to it. Whenever you are moving (e.g. in cars or on bikes) while you are on your phone, the phone operates at full power to maintain connection with one cell tower after another. This means continuous, maximum microwave radiation. On top of that you have constant microwave radiation plumes generated by Wi-Fi and Bluetooth two-way transmissions as well as notifications and updates of numerous smartphone apps. The mobile industry euphemizes this radiation as “radiofrequency energy,” because marketing cellphones as two-way microwave radios used next to the brain would not make them very popular.

Share this message with #savethegirls. Visit ehstrust.org and showthefineprint.com for more information and for free cards to be copied and shared.