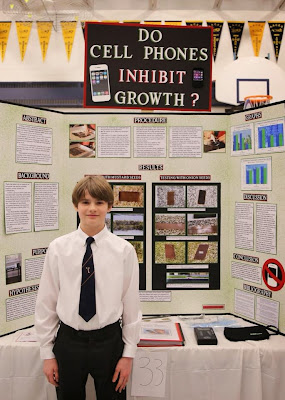 Lucas Brenninkmeijer is a grade 7 student at Oakville Christian School who recently tied for first place in their Science Fair competition. In his project , Do Cell Phones Inhibit Growth?, Lucas conducted an experiment to determine what would happen to the growth of seeds if they were exposed to a cell phone. The experiment compared the growth of seeds on a tray with a cell phone in the middle and on a tray without a phone. The results of the experiment consistently showed that the seeds grown on the tray with the cell phone were shorter and less dense than the seeds grown on the tray with no phone. Lucas will be going to the Bay Area Science and Engineering Fair (BASEF) in Hamilton in March to present his project.