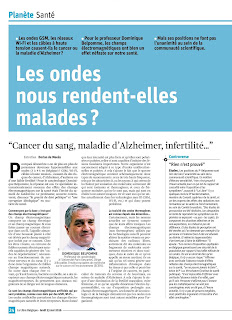 (translated by the Editor of "Towards Better Health")

Why are more and more persons becoming hypersensitive to waves (3 to 4% in Belgium)?  Cell phones, Wi-Fi, high power transmission lines... are they causing risks for cancer, Alzheimer's, autism, low fertility?  Oncologist and internationally recognized specialist in the effects of electromagnetic fields on health, Prof. Dominique Belpomme, is Saturday's guest of LaLibre.be.  He denounces the "seriousness of policy denial" and ideological corruption" regarding health.

Dr. Dominique Belpomme is professor of oncology at Paris-Descartes University (Paris V), author of scientific publications, member of several international learned societies, president of ARTAC (Association for Research on Treatment against Cancer).  He directs the European Cancer and Environment Research Institute in Brussels.  Extracts from the conversation in full in Sélection LaLibre.be:

We thank ARTAC for having sent us the full text of the interview with Prof. Dominique Belpomme by la libre Belgique (text as sent by the journalist).

Let's start with the basics:  what are electromagnetic fields?

An electromagnetic field comprises an electric field and a magnetic field.  If you make electrical current pass through a wire, the needle of a compass placed beside it is deviated by the magnetic field induced by the current.  In living beings, we find natural weak electric currents capable of generating "waves of deplolarization" necessary for the functioning of the nervous system and the heart.  Thus, in the body, there are natural weak magnetic fields.  Moreover in each living being, whether man, bacteria or bee, there are receptors to natural electromagnetic fields, the magneto-receptors.  They allow migratory birds to orient themselves over long distances.

It is artificial electromagnetic fields that are a problem, such as those emitted by cell phones, Wi-Fi...

Articificial waves perturb the natural electromagnetic fields and their receptors.  Given that their intensity is stronger and that they are polarized and pulsed, these are capable of inducing significant tissue damage.  Our body is not at all adapted to this type of unidirectional, pulsed waves.  Add to this the fact that the electromagnetic spectrum schematically has two types of radiation:  that of very high frequency such as ultraviolet B or X-rays which create heating by ionization of molecules;  in other words which are ionizing and heat-generating; and that of lower frequency, which are not, but are in reality just as toxic.  It is these that we currently use in wireless technologies (cell phones, Wi-Fi, etc...) and which cause problems.

The toxicity of heat-generating waves has been known for decades...

Yes, but the current norms do not take into account their toxic effects.  Electromagnetic waves (non-thermal) used by wireless technologies can alter living matter by producing free radicals, in other words, molecules or extremely reactive fragments of molecules, thus toxic, what we call oxidative stress.  We know that such stress generates chronic inflammation in the tissues and this can be a source of cancer, namely cerebral tumors and leukemia or even Alzheimer's disease.  Add to this the risk of decrease in male fertility, even female fertility, and what is called electrohypersensitivity in cases of prolonged exposure to electromagnetic fields.  Toxicological and biological data show that non-thermal waves are just as harmful to the body.

Why are more and more people becoming hypersensitive to electromagnetic fields?

The first hypothesis is innate, genetic.  Of the 1,500 electrohypersensitive (EHS) patients that I have clinically and biologically examined - the biggest group in the world - there are familial forms which suggest the possibility that certain susceptibility genes intervene.  The second hypothesis is acquired, epigenetic.  It would concern most sick people affected by such a pathology.  Here, it is the continuous exposure to waves and changes induced in the cells at the level of certain proteins constituting what one calls the epigenome which would be the cause.  Such changes in proteins would in fact be capable of modifying the gene expression of certain cells in our brain and thus lead to production of pro-inflammatory proteins.  The result is the generation in the brain of neuro-inflammation, the source of electrohypersensitivy.

Can continuous exposure to an electromagnetic field (cell phones, Wi-Fi) make one hypersensitive?

Even if the intensity of exposure is low, its continuity renders it toxic.  The lowering of the limits of tolerance which result explains that EHS [electrohypersensitive] persons can only tolerate electromagnetic fields of very low intensity.  They will thus have symptoms (headache, tinnitus, dizziness, tingling sensation in the body, loss of memory, attention and concentration problems, insomnia, fatigue, etc.) from the levels of intensity promoted by our society.  In the absence of treatment and protection, these persons could over time become intolerant to the entire electromagnetic spectrum and also to very low frequencies (high power transmission lines, household appliances etc.).

Is it reversible once the brain is affected?

Biologically, certain structures of the brain are affected with neuro-inflammation, namely the limbic system and thalamus, the former located in the internal part of the temporal lobes, and the latter, at the base of the brain.  Inflammation in these structures accounts for most of the observed symptoms.  Clinically, these are in part reversible, on condition that one is treated and especially in combination with the most complete electromagnetic withdrawal possible.  By contrast, to our knowledge, electrohypersensitivity itself, that is, sensitivity to waves, persists.  On the whole, thanks to progress, 70% of sick people are today improved by treatment but it is essential to associate it with electromagnetic protection across the board.

Some scientists are less categorical than you are and doubt your reasoning...

It is true that some opponents, working for the operators, speak differently.  But the deceit that they are creating is wearing thin in the eyes of the medical profession and the public.  Today there are sick persons who did not exist before the rise of wireless technologies.  There must be a cause for their illnesses!  In reality, there is true denial on the part of administrative and policy authorities in the face of the scientific data currently available due to the significant economic interests involved.  It is ideological corruption!  The international medico-scientific community, immune from politico-economic pressure, has no doubts about my message.

In the current world, of "wireless", how are hypersensitive persons able to protect themselves?  Do you recommend that they shield themselves at home?

These patients must be protected at home from relay antennas, wind turbines or electrical wiring, that is, transform it into a Faraday cage with the help of anti-wave paints and materials.  But sometimes these measures do not suffice and it is imperative to move.  Sick people understand this in spite of the financial and social impact this represents.  This is why we must emphasize the social burden which results from electrohypersensitivity:  loss of job, breaking up of couples, repeated moves, impoverishment, even extreme poverty, all these factors being the source of sometimes severe depression.


In short, as much as possible prevent or react to the first signs of intolerance?

This is indispensable.  We must for example never implant dental amalgams made of metal.  Can you imagine the impact of these "small antennas" on children?  They risk developing signs of electrohypersensitivity as an adult.  Children must in any case never use a cell phone before age 12 because they are still growing, their neurons and other brain cells are extremely vulnerable to all forms of environmental aggression.  We must thus take drastic measures in schools: ban W-Fi and use of tablets, ban use of cell phones, practice prevention... Teenagers should not use their cell phone more than 20 minutes a day in sequences of 6 minutes, and favor texting (maximum 20 per day).

Is the fetus even more vulnerable to waves?

Pregnant women should only in exceptional cases use their cell phones.  Let's be clear.  It is very serious to place Wi-Fi in the environment of a fetus or child.  The political authorities have a huge responsibility here.  Denying the deleterious role of electromagnetic fields in health is to condemn our children to falling ill.  In the United States, a study shows that 10% of young persons have a 5 to 7% lowering of their IQ.  It is catastrophic from a health and economic point of view.

But nothing indicates that waves are THE cause of these statistics!

Are electromagnetic fields one of the causes of Alzheimer's?

We can confirm without risk of being wrong that it is indeed linked to electromagnetic fields!  It is madness to construct a house or public building near a high power transmission line or relay antenna, or to diffuse Wi-Fi everywhere.  Given that EHS persons cannot access it, it is even an undemocratic act.  The diffusion of Wi-Fi in public places risks increasing the number of EHS persons.  The current policy denial is testimony of real heresy at the scientific level.  It is a planetary cataclysm that we must now fear.  It is much worse than the harmful effects of asbestos.  We shouldn't have a catastrophic vision but in Europe, 3 to 10% of people are afflicted with electrohypersensitivity.  What do we do with these sick people?  And 35 million individuals with Alzheimer's in the world:  they are not coming out the blue... Proof exists, we find it in scientific publications!  On the condition that we read them.  But unfortunately, it's "there is nothing to see..."!

We thank ARTAC for having sent us the full text in French of the interview with Prof. Dominique Belpomme by La libre Belgique (text as sent by the journalist).  Please note this is a translation of what was said.