Mobile Phones in the Delivery Room 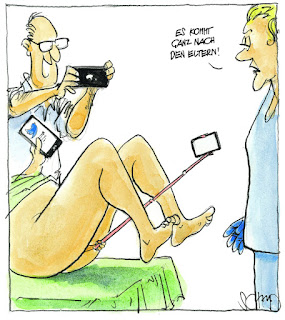 The overburdening use of the smartphone at the time of birth gets increasingly stressful. Experts warn about the consequences for the development of newborns.

The woman is in labor, the child is coming soon, in the baby's room everything is ready for the reception of the new baby. Also the smartphone. When it starts, one thinks one is part of a documentary film, the expectant father filming from all sides, standing in the way, so that the midwife can hardly do her work.  When the child is born, the mother's mobile phone will soon be activated. For half of the new mothers, says an experienced midwife, the smartphone comes into play after only ten to fifteen minutes.

The phenomenon is widespread to an increasing extent in every birth department. Experts are worried, also at the women's clinic of the Triemlispital. "We encounter the problem every day and gave the team a reason to discuss it," says Gabriella Stocker, deputy head physician of the women's clinic. "Parents often take a photo of the child after birth, before they even look at it," she says. The first contact with the child is thereby disturbed. In  mothers' wards, the mothers are also more likely to look at the hand-held display instead of the newborn child. That is why a lunch break was introduced at the mother's child station in the women's ward of the hospital. No visits, no medically or urgently necessary measures to disturb the mother-child relationship. A media-free window should also be established and recommended. "We're trying to sensitize women," says Stocker.

"Triemli" strongly advises against "cinematic and photographic documentation of the birth", also because the unaccompanied handling of the pictures can make a birth process more difficult.

Mobile phone interferes with building of the initial relationship

The cell phone madness is known "only too well" at the Hirslandenklinik In the Park, says Nathalie Colling, head of the department, Frau-Mutter-Kind. Every day, the staff declares that an excessive use of mobile phones can disturb the important initial relationship building. "The phone should not get more attention than the baby."

For Angela Kuck, chief physician of the Frauenklinik in the Paracelsusspital in Richterswil, the smartphone in the delivery room and during care of the new baby is «a big topic». According to Kuck, infants should come into contact with radiation as little as possible. In addition, it is important that parents' attention in the first few days be exclusively for the baby. "It is important to get to know the child, to become familiar with one another, to perceive the expressions and needs of the child and mother. This process must not be disturbed. "This time is a defining feature for the rest of life," says Kuck.

Brochure instead of prohibition

She does not want to accuse the young parents, who mostly from habit or fascination are in the grips of the mobile phone. It is about raising awareness about the risks to parents. "We make the parents aware that one does not need to talk right away about family relationships at a birth." Often, the young parents are grateful to get themselves out of the cell phone routine and the habit of communicating everything right away. It is clear to Kuck: "The father should support the mother at birth, not film her."

A few years ago, there was even a cell phone ban in the Paracelsus clinic, but that can no longer be enforced today, says Kuck. That is why we are providing information in Richterswil. For this purpose, she has contributed to the brochure "Digital media as a game spoiler for babies", which is available in the Paracelsus hospital and points to the consequences of the smartphone delusion. The specialist information is of interest, not only in Switzerland, but also in Germany and Austria. The brochure has already been translated into English and even into Russian, and tens of thousands of accompanying leaflets have been ordered. The editor is Maria Luisa Nüesch from Buchs SG. "Our brochure was created by midwives who have not been able to help each other," says Nüesch.

The former nursery school teacher has been accompanying small children and parents for four decades. In workshops, lectures and articles, she teaches people about the needs of babies and small children. She has warned for years about the use of digital media in maternity hospitals.

Nüesch mentions a study from Germany in the brochure, where mothers have been talking more to their mobile phone than their children. For children, the internal absence of the calling parents is incomprehensible. "In the worst case, they react with mental freezing," says Nüesch, "because the relationship to the baby is the central basis for his life." According to neurologists, the interruption of eye contact, the non-presence of the mother, trigger a fatal chain reaction. "Children become difficult, whiny, unhappy. Mothers do not tolerate this all day, they turn away even more, and everything gets worse," Nüesch says. Babies who have had a difficult birth are particularly vulnerable.

The new revised brochure contains advice from numerous well-known experts. They provide answers to questions such as: Is it still possible for babies to create spaces of tranquility, deceleration, respect? Is it possible for them to be completely undisturbed? What impact do mobile phones, TV and computers have on our infants both physically and psychologically?

"Everything that distracts a mother from dedicating herself to  her child during the initial days is poison for the developing brain of her child and poison for the evolving relationship between the mother and her child," says Gerald Hüther, emeritus professor for neurobiology in Göttingen.  In order for the child to be able to find his way into the new world after birth and to process all the new senses, he needs much peace and security. Confidence is the basis for the formation of a bond between him and his mother. If during this phase the mother is busy with other things, the mobile phone constantly ringing, there is danger "that the building of this confidence is not successful," says Hüther.

An experienced psychologist and parent-baby therapist warns: "Infants are irritated when their parents are not emotionally present and their thoughts are constantly elsewhere. In response to such a lack of emotional availability of the parents, the infants respond with stress, restlessness and prolonged periods of sleep. "

Epidemiology professor Martin Röösli from the University of Basel also considers mobile phones in maternity clinics to be problematic: "After childbirth, the child's radiation exposure can be high if a mobile phone radiates near the child." It should be noted that newborns have a smaller head than adults, and therefore the radiation exposure in deeper brain regions is higher than in adults.

But the pressure to capture everything in pictures characterizes many young parents. The midwife and Zürcher SP cantonal councilor Claudia Wyssen, who herself is the mother of four children, tells of a case where parents asked the under-assistant in the Gebärsaal to film the birth. On the one hand, parents wanted only the best for their offspring. On the other, they were careless with the digital media. "In one hand, they hold the spoon with the organic porridge and in the other, the mobile phone next to the child's head. This is paradoxical. " (Tages-Anzeiger)