(Washington, DC) Under court order, the National Frequency Agency (ANFR) of France has just disclosed that most cell phones exceed government radiation limits when tested the way they are used, next to the body. Manufacturers are not required to test phones in shirt or pants pockets. French government tests on hundreds of cell phones reveal that in 2015, 9 out of 10 phones exceed the manufacturer’s reported radiation test levels when re-tested in positions where the phone is in contact with the body. The government had refused to disclose these test results until the court order.

On June 1, 2017, ANFR posted the details of the make, model and test results for each phone that was tested, after months of legal action by French physician Dr. Marc Arazi. Arazi’s request for the information was initially denied. Popular brands such as Apple, Motorola, Samsung and Nokia were among the cell phone models tested. When tested in contact with the body, some phones have test results as high as triple the manufacturer’s previously reported radiation levels.

“As a physician, I am deeply concerned about what this means for our health and especially the health of our children. People have a right to know that when cell phones are tested in ways people commonly use phones – such as in direct contact with their body – the values exceed current regulatory limits. This is a first victory for transparency in this industry scandal,” commented Arazi.

Ricocheting in headlines throughout France, Arazi and his colleagues have coined the situation as “PhoneGate” because of the parallels to “Diesel Gate” – the Volkswagen emissions saga. Devra Davis, PhD, President of Environmental Health Trust explained, “Volkswagen cars passed diesel emission tests when tested in laboratory conditions, but when the cars were driven on real roads, they emitted far more fumes. In the same way, every one of these cell phones ‘passed’ laboratory radiation SAR tests. These phones are legally considered compliant. However, when these phones are tested in the ways that people actually use them in real life, such as in your jeans pocket or bra, the amount of absorbed radiation emissions in our bodies violates the regulatory limits.” 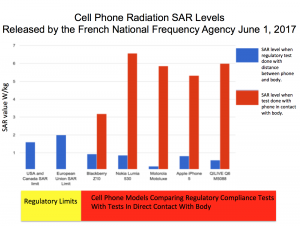 “This is an enormous international scandal. This is not only about France and Europe, as this applies to all persons who use cell phones in every country. If phones were tested in the ways we use them, they would be illegal,” stated Dr. Davis, pointing out that the legal test methods are decades old, outdated and do not realistically represent how people actually use phones.

Far more concerning is that the regulatory limits do not protect the public from adverse health effects related to long-term exposures,“ Davis commented, pointing to recently published research. A study in the American Journal of Epidemiology found cell phones associated with a doubled risk of glioma, a type of brain cancer. Studies performed by the US National Toxicology Program found glioma and DNA damage increased in rats exposed to long-term cell phone radiation.

“I see children cradling cell phones in their laps as their mothers do grocery shopping. Teenagers are sleeping with cell phones placed on their chest or directly beside their heads all night long. Pregnant women put cell phones and wireless devices on their abdomen. Parents have a right to know that when children use cell phones in these ways, their bodies are absorbing wireless radiation at levels that exceed limits set for adults 20 years ago,” stated Theodora Scarato, Program Director at Environmental Health Trust, referring to how the American Academy of Pediatrics has repeatedly called on the US Government to update cell phone testing to reflect current use patterns. The American Academy of Pediatrics has issued clear recommendations to reduce cell phone radiation exposures to children.

The Public is Unaware

France’s National Agency of Health Security of Food, Environment and Labour (ANSES) July 2016 report “Radiofrequency Exposure and the Health of Children” conceded that the public is largely unaware of instructions to keep a distance between cell phones and anyone’s head and body. ANSES stated that it was “unlikely that people, especially children, are aware of the conditions of use close to the body, as defined by manufacturers.”

The Canadian Broadcasting Corporation (CBC) independent survey of more than 11,000 Canadians found that more than 80 percent were unaware of manufacturers’ recommended separation distance and 67 percent admitted they carry their phones against their bodies.

The newly released French data is also corroborated by the 2017 independently commissioned investigation by the Canadian Broadcasting Corporation that tested popular cell phones in a US government certified testing laboratory and found SAR values surpassed the US and Canadian allowable SAR values when the phones were tested in body contact positions.

In response to these concerns, manufacturers state they are fully compliant and argue that these instructions are already available to consumers. In California, the City of Berkeley was sued by the CTIA, a wireless industry lobby group, when the City passed an ordinance mandating consumers are informed of these manufacturers’ instructions by retail stores. The CTIA argued that the “Right To Know Ordinance” violated free speech rights and recently lost their case in court when the judges ruled that the Ordinance was “in the public interest”.

Litigation is moving forward involving more than a dozen people in the U.S. who claim their brain cancer is related to their cell phone use. In Italy, a recent court ruling recognized a link between cellphone use and brain tumors and granted lifetime compensation to a man who developed a brain tumor after 15 years of work related cell phone use.

“Why does the public have to sue to get this information?” Scarato asked. “And what about children in schools? The Maryland State Children’s Environmental Health and Protection Advisory Council has recommended that schools reduce radiofrequency radiation exposures to children by installing wired networks rather than Wi-Fi, same as in Cyprus, France and Israel. Yet at the same time, schools are now allowing or even insisting children bring cell phones into classrooms. I am sure most of those children are carrying these phones from class to class in their pockets close to their body. They are not aware of the radiation exposures.”

Before a cell phone model is permitted to go on the market for sale, its manufacturer performs Specific Absorption Rate (SAR) tests to evaluate the radiation levels. SAR values are expressed in terms of watts per kilogram (W/kg) and are intended to measure the amount of cell phone radiofrequency radiation absorbed by the body when using a wireless device. SAR tests are performed in laboratories by measuring the SAR in a test dummy filled with liquid. The European Union regulations allow a maximum of SAR 2.0 W/kg. The United States and Canada allow a maximum of SAR 1.6 W/kg. Every cell phone is rated with a specific SAR value, and many countries mandate that these SAR values be prominently displayed to consumers on cell phone packaging.

Since 2010, France law has ensured that SAR levels are placed prominently on cell phone packaging and the sale of cell phones was banned for young children. French legislation in 2015 included several new policies aimed at reducing exposure to radiofrequency radiation. Arazi called on the Health and Environment Ministers and Consumer Affairs and Fraud Prevention Agency to take immediate action on this new information by informing the public and issuing new protective policies.

Link to France’s National Agency of Health Security of Food, Environment and Labour Report on Radiofrequency and Children (In French)

Phonegate: A first victory with the publication by the ANFR of the SAR, Press Release by French physician Marc Arazi, June 1, 2017