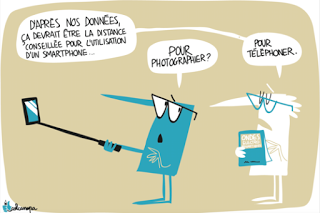 The levels of radiofrequency exposure announced by manufacturers are exceeded during actual conditions of use.

Among Christmas purchases, mobile phones feature prominently without consumers being clearly warned about their exposure to the radiofrequencies of these devices and their potential dangers.

This is because the data provided by manufacturers are based on tests conducted in the laboratory following procedures very different from the actual conditions of mobile phone use. This is what “anti-wave” militants are denouncing today, seeing this as “an industrial and health scandal” similar to “dieselgate”. A « phonegate » then? In the current case, it is not strictly speaking a question of cheating, but rather a muddling of information given to users, favoring lax regulation. The health implications are none the less important. The World Health Organization (WHO) has classified radiofrequencies as “possibly carcinogenic to humans”. In a July 2016 report, the National Agency for Food, Environmental and Occupational Health Safety (ANSES) considers these waves have “possible effects on the cognitive function and well-being” of young people.


The dossier is technical, which contributes to its opacity. Exposure to radiofrequencies emitted and received by a mobile phone is measured by the specific absorption rate (SAR), expressed in watts per kilogram (W/kg). It is the quantity of energy absorbed by biological tissues in the form of heat. In Europe, a 1999 regulation fixed the value as not exceeding 2 W/kg for exposure of the head and torso, and 4 W/kg for limbs.

However, if, for tests at the level of the head, the regulation requires the measurement to be made with the phone glued to the ear, it allows industry freedom to fix the distance at which the device is located for the rest of the body, selecting it so precisely that the exposure limit is not exceeded. Except for the most recent models for which the test distance has been shortened, it has hitherto been about 15 mm, with a maximum of 25 mm. These few millimeters make all the difference in real life, where the mobile phone is commonly carried in a shirt pocket, jacket or trousers, nearly in direct contact with the skin. In this respect, even when the user is not calling, his mobile phone in standby mode remains connected and a source of radiofrequencies.

The National Frequency Agency (ANFR), the public institution responsible for control of this sector, has proceeded with its own evaluations in European laboratories of a sample of 95 mobile phones selected in different stores between 2012 and the end of 2014, and 71 others selected in 2015. At a distance from the body of 1.5 cm, none exceeded the limit of 2 W/kg. However, it carried out new measurements, this time with the device in contact with the body. The results were very different. They were mentioned in the July report of ANSES. In 2015, we read, “89% of phones measured on contact by ANFR presented a SAR greater than 2 W/kg and 25%, a SAR greater than 4 W/kg”. Some even attained 7 W/kg. These excesses did not concern exposure to the head, but to the rest of the body.

Industry argues that the instructions for use of their products, as well as the information accessible on-line or on the smartphone itself, correctly mention that the tests have been conducted at a certain distance from the body and that this must be respected in order not to exceed the certified levels of exposure. One must scrutinize the documentation to know this. Moreover, ANFR found that « the instructions for use of 25% of the controlled phones presenting a SAR in contact with the body greater than 2 W /kg did not indicate a minimum distance for use”.

The results of this counter-expertise have not been disclosed. Former coordinator of the national association Priartem (To gather, inform, and act on the risks associated with electromagnetic technologies), Marc Arazi, today an « independent expert », has tried to obtain them. He appealed to the Commission for Access to Administrative Records, which declared itself « in favor » of communicating the data of ANFR before 29 December. Asked by Le Monde, Gilles Brégant, the director general for establishment of controls, said he would not make them public. The reason: « The law prohibits their disclosure to third parties, as these data have been collected through procedures that may give rise to sanctions.” Asked directly, Apple and Samsung did not want to comment.

ANFR reacted by alerting the French authorities who have turned to the European Commission. In April, it took a decision stating that certification tests must be carried out at a distance from the torso “not exceeding a few millimeters”. This formulation still leaves room for industry to manoeuvre, but Mr. Brégant assured, “All the devices marketed since April 2016 are tested at 5 mm from the body”. This late measure does not regulate, however, all the mobile phones already in service. In France, 25 million mobile phones are put on the market each year. Without doubt, the issue of the danger of radiofrequencies remains debatable. But for Olivier Merckel, responsible for new technologies at ANSES, the increase in exposure to waves, now commonplace, compared to the levels declared by industry “must be the object of special attention for children and persons with medical devices such as pacemakers, whose operation may be disturbed by even weak electrical fields”. The spokesperson for the association Robin des Toits, Etienne Cendrier, emphasizes that « the human brain is not made of water and sugar like the test mannequins ». He adds, “The exposure norms, apart from being very high, take into account only thermal effects to the exclusion of other risks such as possible cancers”. The president of Priartem, Janine Le Calvez, draws a valuable lesson from this: “No mobile phones for children!” 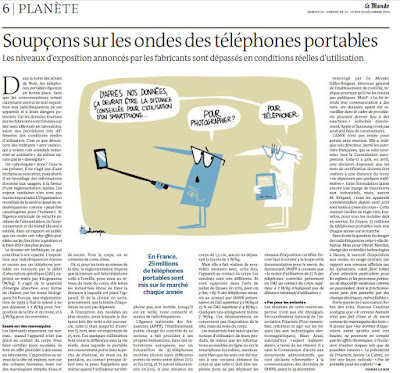