Digipigi – It’s All about Money

“Today, CS, UBS, Migros, Coop, H & M and the other legal dealers of this world are targeting our children with digitized entry-level drugs.”

Digipigi – It’s All about Money
by the Editor, "Towards Better Health", 2 November 2017 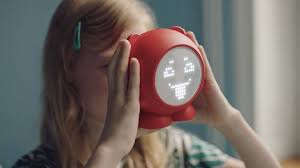 Crédit Suisse, the second largest Swiss bank, has recently created a connected piggy bank called "Digipigi", available for now only in Switzerland.1 Its purpose seems to be to attract clients from the youngest age with the hope of keeping them from "cradle to the grave". It is being promoted as a way of teaching children how to handle money from a very young age and to prepare them for a cashless society. Digipigi is not suitable for children under age 3. 2

Digipigi is full of technology. It is not just a clock, an alarm clock, a night light but communicates via Wi-Fi with the associated smartphone apps, one for the child and one for the parents. The digital pig interacts with the child with 25 different facial expressions and noises and talks to the child.

Is this like other connected toys, inviting easy access of hackers to the personal details of children?  Almost as bad as hacking, the personal data of children is tracked and used for the purpose of marketing such items as product offers, prize games or website content.  "The bank tracks users' behavior in the Digipigi apps and Digipigi money box together with the related personal information and stores this data on servers in Switzerland for five years."3  This is not mentioned in the Instruction Manual.

Digipigi is part of the VivaKids package for children aged 7 to 12, which includes the use of a bank card (debit card), an internet portal and a magazine designed to help the child deal with money. The package offers games, quizzes, and videos. The granting of 5% interest is enticing bait, but the high percentage is for only up to a total of 1,000 francs, Afterwards, the interest rate drops to 1%. If the parents have a Bonviva customer package with Crédit Suisse, the Digipigi is free for their children. For other CS customers, it costs 99 francs.

Perhaps the most harmful aspect of the digital piggybank is that it exposes very young children to radiofrequency (electromagnetic) radiation from Wi-Fi and smartphones, classified in 2011 by the International Agency for Research on Cancer as 2B “potentially carcinogenic to humans”. Certain reputable scientists, independent of industry, are calling for a reclassification to 2A “probably carcinogenic” and even to group 1 “carcinogenic”.4  In September 2017, scientists responsible for the $25 million U.S. National Toxicology Program study on rats and mice exposed to cell phone radiation concluded that “exposure to radio frequency radiation has the potential to induce measurable DNA damage under certain exposure conditions”.5  Digipigi encourages children to use a smartphone or tablet from a very young age.

Here is what an expert says about the radiation:  Every planning, saving and other money operation of the child exposes him/her to Bluetooth and Wi-Fi/Mobiledata (3G/4G) radiofrequency radiation. On top of this, there will be the constant Bluetooth/Wi-Fi connection from mobile phone to Digipigi all night long at the night desk of a child, just to keep the Digipigi-device awake and operational. (The night light functions without Wi-Fi.)

Crédit Suisse has spent large sums of money to promote Digipigi in the media in Switzerland and abroad. During its main TV news hour, RTS1 in French-speaking Switzerland “promoted” it with help of the head of one of the consumer groups, Fédération Romande des Consommateurs, and Pro Juventute, an association for the protection and well-being of children.6

Articles appearing in some Swiss newspapers, however, criticize Digipigi:7

- "The Internet of Things pushes its way into children's rooms"

- “Today, CS, UBS, Migros, Coop, H & M and the other legal dealers of this world are targeting our children with digitized entry-level drugs.”

- “Since it is coupled with an app, the question arises whether and how often small children should be using mobile phones and tablets.”

We wrote to the CEO of Crédit Suisse, pointing out the risks of connected objects for young children.

The bank’s reply was unsatisfactory, with no mention of the potential impacts on children’s health. Rather, the bank replied (translated text):

“Digipigi has been pre-tested beforehand for several months and complies with the standardized guidelines such as the European Commission standard for children’s toys. It has also been certified as meeting the guidelines for electromagnetic radiation.”

The letter quotes a study indicating that “nearly 98% of households own a mobile phone / smartphone.8   In addition, the mobile phone is the media device that is found today most often in children's rooms. That's why our Digipigi has been designed so that if parents want, it can be combined with an app. The Digipigi can however be used without apps or smartphones / tablets. Parents decide for themselves when their child can use the apps. If they do not want their child to use a smartphone, parents can install both Digipigi apps on their own smartphone. "

The standards with regard to electromagnetic radiation were established many years ago and are out-of-date. Furthermore, they apply to an adult, not to the more vulnerable, developing bodies of children. Mobile phones and other wireless devices do not belong in a child’s bedroom.

But of course, it’s not about health, it’s all about money.