The Hidden Dangers of Cell Phone Radiation: 2007 Article on the Research of Dr. George Carlo - Part 2 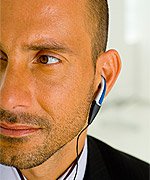 Following the loss of his home, Dr. Carlo collaborated with Washington columnist Martin Schram—who in the course of the work did his own research to corroborate Dr. Carlo’s view on things—to write Cell Phones: Invisible Hazards in the Wireless Age (Carroll & Graf, 2001). He wrote his book as what he thought would be a last volley at the cell phone industry.

“I needed to tell the whole story in one place. I didn’t have the resources or the manpower to match what the cell phone industry was doing to try to discredit the work,” says Dr. Carlo. “Based on the book, a number of lawsuits were brought against the industry, and insurance carriers began excluding cell phone-related health risks in their coverage. It created a very difficult situation in the industry and for myself. I was worn out fighting that battle. In 2002, after I’d done my book tour, I just decided to take a break for a couple of years.”

Instead of taking a break, however, Dr. Carlo ended up working behind the scenes, setting up an organization and a registry for the benefit of consumers. It was a creative solution as part of the settlement of a lawsuit brought by a Illinois citizen against the cell phone industry, WTR, and Dr. Carlo personally. The lawsuit alleged that the cell phone industry, WTR, and Dr. Carlo were conspiring to hide the dangers of cell phones. Dr. Carlo was offered a way out of the suit because his book had made it clear he wasn’t on the same page as the industry.

“I wanted to make sure the litigation brought at least some value to consumers. We created the Safe Wireless Initiative for disseminating information on the dangers and on prevention, and the Mobile Telephone Health Concerns Registry to track information voluntarily provided by cell phone users, particularly those who believe they’re experiencing health effects. Post-market surveillance hadn’t been done before, and the registry does that. It will help direct future research of potential health effects related to cell phone use. In the end, we did the best we could to get some benefit for consumers.”

To repair damage and build the body’s defenses against the onslaught of EMR, supplements—along with dietary changes, stress reduction, weight control and exercise—make you stronger, more balanced, and better able to face the assaults of EMR. Antioxidant supplements that fight free radicals are especially desirable.

Says Dr. Carlo: “You as a human being are put under siege by the electromagnetic soup we’re swimming in, and this isn’t hyperbole, it’s true. When you answer your cell phone, radio signals are around you. Just because you can’t see it doesn’t mean it’s not there. Our general ability to compensate for those insults is becoming compromised by the ever-increasing background of EMR.”

Taking as many precautions as you can goes a long way to reducing the risks. However, Dr. Carlo cautions that there is no silver bullet solution. “It’s a complicated problem, and while we tend to look for a quick fix, there is none here. Over the next decade, I hope we figure out how to change the way signals are transmitted. A thousand years from now we will have evolved, but that’s not helping us now. This will take time, but consumers have to be empowered to help themselves in the interim.”

The industry took its tricks elsewhere—to Europe, which had picked up the ball and began funding independent research to corroborate or confirm the work of Dr. Carlo and his team. The work was completed in mid-2004 and when it was released,12 it not only provided independent scientific corroboration of the work done by Dr. Carlo’s group, but also took the work a step further and showed how the problems were occurring mechanistically. This information formed a biologically plausible hypothesis for how cell phone radiation could be related to so many diseases.

Dr. Carlo noted, “The industry exerted pressure on the scientists who conducted the work, including renowned German scientist Dr. Franz Adlkofer. It first tried to change the conclusions of the work, then to delay its public release. Then Dr. Adlkofer, the lead scientist, was attacked in the media and threatened privately with no more research money, a ruined reputation—similar to what we experienced in the WTR. But this situation attracted the attention of a German documentary filmmaker, who decided to do a film on the cell phone issue.”

It was enough to bring Dr. Carlo into view again, as he was asked to participate. The film, The Boiling Frog Principle, by Klaus Scheidsteger, builds on information from his first film, The Cell Phone War, and will be released in 2007. Its intent is to integrate the latest political and scientific evidence from around the world, and bring forth to consumers important information on cell phone dangers that was previously withheld.

Currently in the US, there are seven class action lawsuits moving forward against the cell phone industry, says Dr. Carlo, and nine other cases that are personal injury cases brought by people with brain cancer. In the past two years, two workers compensation awards were given to people with brain tumors based on a link between their tumors and their cell phone use in the workplace. Both of these cases occurred in California.

“What we have now is a major litigation burden, a vulnerability the cell phone industry has never before been under,” Dr. Carlo says. “They’re uninsured for these health risk claims and are already positioning themselves for a congressional bailout, like the Savings and Loan crisis of the late 1980s. They’ll lose a couple of these lawsuits and once they do, there’ll be an onslaught of new litigation against them.”

The country can’t afford for the cell phone industry to go under, Dr. Carlo says, as it would have a disastrous impact on the entire economy—some estimates say over 30% of investment stocks in retirement funds are tied to telecommunications shares. That’s why Congress will figure out a way to bail out the industry.

“The industry thinks they can afford to continue on with this institutional arrogance, endangering millions of men, women and children because, at the end of the day, they believe they’ll not be held accountable. They think they can continue to manipulate consumers.”

It’s been nearly 12 years since the WTR was funded. Despite Dr. Carlo’s revealing research and the corroborating research of other scientists from around the world that continue to follow, a search of media reports today on the subject of cell phone dangers tends to suggest one of only two conclusions: There is no risk, or no one has yet proven the risk. That’s at odds with more than 300 studies in the peer-reviewed scientific literature supporting an increased risk of disease. Clearly, something doesn’t add up.

The industry’s manipulation of the media to consider only one study at a time obfuscates the big picture.Individually, there’s little to see. But the depth and breadth of the science that points to the problem, and the compilation of studies, make the future look frightening. Like the September 11 tragedy, where no one in government talked to each other and did not see it coming for lack of a big picture view, the health crisis from cell phone use looms darkly.

“When you put all the science together, we come to the irrefutable conclusion that there’s a major health crisis coming, probably already underway,” warns Dr. Carlo. “Not just cancer, but also learning disabilities, attention deficit disorder, autism, Alzheimer’s, Parkinson’s, and psychological and behavioral problems—all mediated by the same mechanism. That’s why we’re so worried. Time is running out. When you put the pieces of the puzzle together, it’s such a wide ranging problem. It’s unlike anything we’ve ever seen before.”

The most effective technique for protecting yourself against the dangers of cell phone radiation is keeping the phone at a distance from the body. Simply using a hands-free headset is a big step. Headsets keep the cell phone’s antenna at a distance of six to seven inches away from the body, thus eliminating near-field exposure. Wired headsets can act as an antenna to draw some ambient EMR, but not much, so using one is still preferable to holding the phone to your head. Wireless headsets should be avoided, as they draw much more far-field EMR.

The safest headsets have hollow air tubes, similar to those used in stethoscopes, instead of wires.They offer protection against both near-field and far-field exposure. If possible, avoid wearing the phone at your waist, which exposes the hip bones to radiation. Eighty percent of red blood cells are formed in the hip bones. There are also newer cell phones available capable of functioning in speaker phone mode. This enables you to talk on the phone while keeping it at a safe distance from your body. If you are able to conduct most of your conversations using a speaker phone, this could enable you to use a cell phone without encountering the intense radiation exposure that occurs when holding it to your ear.