Our comment:  Yes, parents are partly responsible for their children's cell phone addiction.  No child should be given a cell phone before age 14.  It is not only addiction that is a problem, but also the excessive amount of radiation being emitted by many cell phones. Manufacturers and regulatory agencies are misleading the public on this issue.  Read the articles under the category "Phonegate" on this blog. And protect your children! 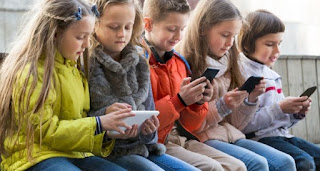 The American entrepreneurial spirit is something to behold. It is possessed by individuals who have an abundance of drive, vision, versatility, persuasiveness and an affinity to take risks. From the single entity businesses that carve out a local niche to those that grow into international icons, they create or provide a product that consumers want and are willing to pay a fair price for it.

Sometimes, those ideas grow and grow and grow into things consumers don't just want but, ultimately, believe they need. Carving out a sustainable, profitable market share can be the ultimate reward. But even that reward can become a risk. On those rare occasions when the demand for a product reaches a point when consumers irresponsibly use a product, history has shown it can be the entrepreneur who bears the liability.

We have products that have moved far beyond consumer want. Some products are so in demand, they have expanded Abraham Maslow's hierarchy of needs from five to indefinite. No longer do humans have physiological, safety, love and belonging, esteem and self-actualization needs, we need athletic shoes, alcohol, automobiles, guns, cigarettes, fast food, prescription drugs and cellphones.

Yes, we absolutely need these culture-changing things — so much so, at times, irresponsible over-consumption of these products can result in lifestyle-altering, serious injury or death. During these no-longer-rare cases, we have asked our government to fault the producers for our lack of personal responsibility. Initially, we asked the law to require warning labels on products that might lead to personal injury. However, when adult-aged citizens can consume a product for the majority of his or her life, contract an illness and then turn around and fault the producer, we have put an unnecessary roadblock in the path of business.

The fast-food industry has partly been blamed for our obesity problem. The alcohol business gets blamed for the actions of irresponsible drinkers. Gun manufacturers, athletic shoe makers and pharmaceutical companies have been targeted by the government on behalf of consumers for the popularity of their products. Now, the cellphone industry has reached the point where consumers cannot control their use, urges and needs — even in their own children.

Iconic brand Apple recently has come under scrutiny because one of its products, the cellphone, is resulting in addiction in children. Yes, children must have a cellphone. And it is Apple's fault. Parents want Apple to parent their children. The same parent who buys the $1,000 product and gives it to their children, now wants the producer to come up with a means to make their product less desirable to their children.

It is not a joke. Some parents who cannot control their children are asking Apple investors to make a less-enjoyable product. Because of a parent's inability to parent, entrepreneurial spirit be damned. And Apple responded in part saying, "We think deeply about how our products are used and the impact they have on users and the people around them. We take this responsibility very seriously, and we are committed to meeting and exceeding our customers' expectations, especially when it comes to protecting kids."

Out of all the factors inspiring innovators must consider before embarking on such a daunting venture, what should we do about all the stupid people who will irresponsibly buy and use our goods, shouldn't be one of them. But, it might be the No. 1 consideration soon.

The entrepreneur who designs and markets personal consumer responsibility and includes it as standard equipment and not an option, is going to rule not only the market but the world.

Ron Jackson is a regular columnist for the Daily Journal and can be contacted at rjackson@daily-journal.com.