Why the Largest Study Ever on Cellphones and Cancer Won’t Settle the Debate​
By Ryan Knutson, The Wall Street Journal, 2 February 2018

Research found small increases in tumors and DNA damage in some rats; ‘No smoking gun’ 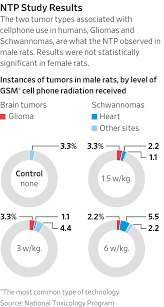 U.S. researchers spent nearly two decades to design and carry out a definitive study on the health effects of cellphone radiation. The final results, released Friday, are likely to fuel rather than dispel the long-running debate about the planet’s most ubiquitous electronic device.

Among the observations: Male rats exposed to the radiation had small increases of tumors in their hearts and brains. Females didn’t. Exposed animals also showed signs of DNA damage, which experts thought wasn’t possible. But they also lived longer and had a significant reduction in a type of kidney disease.

Taken together, scientists at the National Toxicology Program, which carried out the study, said the research showed that cellphone energy did have biological effects but that it wasn’t clear what it meant for humans. The animals were exposed at levels greater than what people normally get from their devices.

“Typical cellphone use is not going to be directly related to the kind of exposures that we used in these studies,” said John Bucher, a senior scientist at the NTP.

Even so, experts have long believed cellphone radiation was too weak to cause effects like damage DNA, which carries genetic instructions for growth, development and reproduction. NTP scientists were quick to say they weren’t certain the damage was a result of the cellphone radiation exposure or some other factor.

“I expect that people who are worried about the issue will pick up on these results as confirming their worst fears, while more-neutral scientists will probably talk about how fragile and small the effects are,” said Kenneth Foster, a professor of bioengineering at the University of Pennsylvania.

The NTP spent $25 million to design and carry out its laboratory study, which was requested by the Food and Drug Administration in 1999. In 2016, the agency released early findings that showed exposure to RF radiation was correlated with a small increase in tumors in the brains and hearts of male rats that were similar to tumors that had been observed in human cellphone users.

The FDA said Friday it was reviewing the findings, but that under current safety limits, “We have not found sufficient evidence that there are adverse health effects in humans.”

The NTP released its full report, including data on mice that were studied. The NTP found “equivocal evidence” of carcinogenic activity in male and female mice, a weaker link than with the male rats. The agency said increased tumor rates in the hearts of male rats provided “some” evidence of carcinogenicity.

Statistically significant DNA damage was most commonly found in the frontal cortex of male rats and mice.

Outside experts will be able to comment on the findings, and the agency will hold a peer-review hearing in March before adopting official conclusions.

The results of the study are hard to translate to humans in part because the NTP is designed to identify hazards, not necessarily risk levels, NTP director Linda Birnbaum said in an interview last year. But the study could be a steppingstone for researchers to determine whether a certain amount of cellphone usage does result in an increased risk.

Otis Brawley, chief medical and scientific officer for the American Cancer Society, said the results wouldn’t change what he tells most people when asked of possible dangers: “The evidence for an association between cellphones and cancer is weak, and so far, we have not seen a higher cancer risk in people,” he said. “But if you’re concerned about this animal data, wear an earpiece.”

The Environmental Health Trust, a nonprofit that has urged people to use headsets and never put cellphones in pants pockets, said the results were troubling. “We test animals in order to predict effects on humans and prevent them from taking place,” it said in a statement.

Scientists world-wide have produced a sea of conflicting research findings, beginning with years of industry-sponsored work in the 1990s that failed to end worries about cellphone safety.

In 1999, the U.S. sought a more definitive answer from the NTP, which is part of the Department of Health and Human Services. The study was the most expensive ever done by NTP, which investigates potentially hazardous agents, from pesticides to dietary supplements.

In an underground Chicago lab, scientists radiated more than 2,000 rodents with cellphone energy for about two years, starting around 2010. The rats and mice were housed in custom rooms and exposed in groups to different levels of cellphone radiation.

The test chambers were “essentially large microwave ovens,” said Ronald Melnick, one of the researchers who designed the NTP study. The animals roamed freely in the test chambers, their entire bodies exposed to the cellphone radiation.

The lowest exposure was roughly similar to talking on a cellphone with weak reception for about nine hours a day. (Cellphones emit more radiation when pushing a signal a greater distance.)

The study’s goal was to expose the animals to as much of the radiation as possible, said Dr. Melnick, who retired in 2009. If there was no observable effects, the safety debate might be closed.

Despite the widespread use of cellphones, there hasn’t been an increase in brain tumor rates, according to the Central Brain Tumor Registry of the United States, whose current data goes through 2014. There are more active cellphones in the U.S. than people, and Americans on average spend more than 12 hours talking on the device each month, according to industry statistics.

The chance of getting a brain tumor is small—about 76,000 Americans were diagnosed with one in 2014, or about 23 out of every 100,000 people, according to the brain tumor registry, a nonprofit.

Cellphones use the same technology as a microwave oven. When they first came to market in the 1980s, the only known health effect from RF was that it heated human tissue. Safety engineers established RF exposure limits designed to prevent the heat effect. The amount of RF a user absorbs, known as SAR, for specific absorption rate, is listed in cellphone user manuals.

Broad worry over health effects surfaced after a Florida man named David Reynard made a 1993 TV appearance on “Larry King Live” and claimed the brain tumor that killed his 33-year-old wife was caused by her cellphone.

Mr. Reynard filed a lawsuit against the industry, which was later dismissed for lack of evidence. But within days of the broadcast, the industry trade group CTIA said it would commit millions of dollars to research. After spending $25 million, the research ended in 1999.

The FDA said at the time that the industry-funded research didn’t make enough of a case to strengthen cellphone safety standards and followed up with its own studies that found no correlation. The FDA also asked the NTP to begin a study to fully assess the risk.

The outcome of the debate could have major financial implications for wireless companies like Verizon Communications Inc. and AT&T Inc.There are more than 50 plaintiffs grouped in a lawsuit alleging harm from cellphone use that is snaking through U.S. courts.

George Carlo, who lead the industry research effort in the 1990s, said the only certainty is continued debate: “That’s what makes it so maddening: Good honest, scientific people can reach different conclusions from the same data.”