From Dieselgate to Phonegate 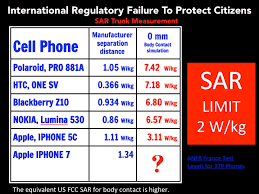 The Tribune de Genève recently published an article on banning diesel cars in cities in Germany.  Pollution prematurely kills 13,000 persons in Germany.  Health priority:  Hamburg, Stuttgart and Munich affirm that they have no other choice.  In the city of BMW, the ban of motors not having the Euro 6 standard, that is, 300,000 vehicles, is foreseen.  "I see no other alternative.  The level of pollution is becoming terrifying", says the mayor of Munich, Dieter Reiter.  "The health of citizens takes precedence."

Does the German Federal Office for Radioprotection (BfS) know about this serious public health issue?  We compared the SAR body of three mobile phones on the site of the BfS, measured at a certain distance from the body, to that of ANFR (French National Frequencies Agency) at 0 mm distance from the body:

Someone should alert the BfS and journalists writing articles such as the one just appearing in Forbes:  "Which Smartphones Emit the Most Radiation?".

Many times, we have asked for translations into German (the official language of three European countries:  Germany, Austria and Switzerland) of the press releases of Dr. Marc Arazi, the whistleblower who uncovered the Phonegate scandal.

Who would like to help us relay information in German on Phonegate?