Switzerland: Testimony of Electrohypersensitivity and Comments from MfE and FOEN

We are posting a summary and part of this recent article published in a Swiss newspaper in order to contribute to the understanding of electrohypersensitivity (EHS) and also share what both the Association of Doctors for the Protection of the Environment (MfE) and the Federal Office of the Environment (FOEN) say about this condition, 5G and electrosmog in general.

Jürg Baumann, Head of the Non-Ionising Radiation Section at the The Federal Office for the Environment says that the most important source of non-ionizing radiation is often the mobile phone.  The distance between the source of radiation and the human body is crucial. "It is suspected that heavy use of mobile phones could cause brain cancer..."

As for the measures taken by the Confederation to protect the population from the harmful effects of electromagnetic fields, "with regard to scientifically proven effects, safeguards have been put in place" but this seems to apply mainly to antennas and mentions only "heating of tissues of the body".

[Our comment:  Switzerland often does not take into account international studies conducted by researchers outside the country, such as the studies of the U.S. National Toxicology Program, and does not have a nation-wide campaign to educate the public in the proper use of wireless technologies to reduce exposure to electrosmog.]

A year ago, Pierre Louis, luthier by profession, began to experience headaches day and night, and insomnia.  He consulted doctors who could find nothing wrong. One day, walking in the forest, there were moments when he felt well and others when he did not. He was holding his cell phone and noticed these changes were linked to the presence of a network.  Over the coming weeks, one of his customers told him he suffered from the same symptoms due to exposure to electromagnetic fields.

Pierre asked a specialist to come to his home to measure non-ionizing radiation.  The specialist found it "conformed perfectly to the standards". On the brink of exhaustion, he decided to leave his home and live with his parents where he set up his workshop. The location, in a hollow behind a large rock, blocked the radiation.  Pierre was persuaded he was suffering from electrohypersensitivity (EHS). Since he has been living there, his headaches have disappeared, he can sleep, and he has recovered his energy.  But when he goes to the village, he has to protect his head with a veil made of silver thread.  If he stays in a heavily exposed place for two hours, it takes him two days to recover.

His social life has been reduced.  He was president of the instrumental ensemble of La Neuveville and the sailing club, two activities he can no longer exercise.  It has become impossible for him to go to a restaurant, to the movies, to leave on vacation and stay in a hotel.  He cannot go as often to concerts in the capacity of his profession of luthier and believes his business will suffer.

Electrosensitivity is not recognized medically in Switzerland. The only way to get a medical certificate is to consult a psychiatrist. Some EHS people have lost their jobs, and have had to leave. Pierre feels he is lucky to be self-employed, to be able to work from home and to have been able to settle not too far away.  He does not know what the future will bring. He hopes his body will recuperate and he will be able to live as he used to.


Questions for Dr. Peter Kälin, President of Doctors for the Protection of the Environment

What do we actually know about the effects of electrosmog on health?

Radiation from mobile phones, for example, causes fluctuations in the electrical activity of the brain and effects on blood circulation in the brain and on sperm. The International Agency for Cancer Research classified radiofrequency radiation as possibly carcinogenic in 2011.

Are the political authorities paying enough attention to this problem?

Our association considers that the current knowledge is is very worrying and requires precautionary measures. More research is needed to inform the public about ways to reduce exposure. Maybe also lower the limit values....

Some people contest the link between magnetic waves and the symptoms suffered by EHS personns.  Does EHS really exist?

In laboratory studies, it appeared that some people analysed could not distinguish whether they were actually exposed or not to a magnetic field. On this basis, the World Health Organisation and the Federal Office for the Environment (FOEN) have therefore not recognized any link between exposure to waves and the ills suffered by these people. However, according to the FOEN report, individual sensitivities cannot be completely excluded. In our experience, the group of people who claim to be electrosensitive is very heterogeneous - whether it is in terms of symptom onset or the possibility of getting rid of them or not. But in some of them, a link between symptoms (sleep disorders, headaches, concentration disorders) and radiation is quite plausible. However, a distinction must be made between the proven harmful effects mentioned above and electrosensitivity, which is a subjective phenomenon.

In a survey conducted 12 years ago in Switzerland, 5% of people questioned were said to be electrosensitive.  More recent international studies show comparable results.

With the arrival of 5G, will this phenomenon increase?

It seems important to redo the EHS survey before introducing 5G. We are pleased that twice the Federal Parliament refused an increase in limit values for mobile phone antennas but the debate is unfortunately not yet closed. The introduction of 5G worries us because this technology requires higher frequencies that can be absorbed by the skin, a very sensitive tissue.

What advice would you give to people who believe they are hypersensitive to waves?

We first recommend that they consult their family doctor to verify there is not another cause for their ills. Unfortunately, there is not yet an institution which proposes tests.  There are no medically valid directives for the diagnosis and treatment of EHS, although international efforts are being made to develop such guidelines. In any case, if a link between environmental pollution and ailments seems plausible, we are happy to make our technical knowledge in this field available to the family doctor concerned.  CLR


Point of view of the Federal Office for the Environment
"With the arrival of 5G, electrosmog will inevitably increase."

Pierre Louis counted at least 9 antennas more or less near his former home.  Jürg Baumann, Head of the Non-Ionising Radiation Section at the Federal Office for the Environment (FOEN), points out that the largest installations are not necessarily the most problematic. "The most important source of non-ionizing radiation is often the mobile phone. Indeed, the distance between the source of a radiation and the human body is crucial. So, even if the radiation from a cell phone is not very powerful, the fact that we stick it to our head to use it increases the radiation dose to which we are exposed tenfold," he explains.

As for the measures taken by the Confederation to protect the population from the harmful effects of electromagnetic fields, Jürg Baumann noted that, with regard to scientifically proven effects, safeguards have been put in place. "For example, we know that the radiation from emitters can cause - if we are very close to it - a heating of the tissues in the body. Switzerland has therefore issued strict standards to be respected (stricter than its neighbors) to limit these effects," he explains.

Jürg Baumann acknowledges that there is not yet enough perspective on the long-term effects of new technologies. "It is suspected, for example, that heavy use of mobile phones could cause brain cancer, but no study has been able to conclusively prove this. This is why the precautionary principle must be applied," says Jürg Baumann, who points out that the Confederation finances research projects in collaboration with doctors and universities. What is certain, however, is that with the announced arrival of 5G for mobile telephony, electrosmog will increase in importance. "The problem is that several generations of technologies are evolving in parallel, with 2G still cohabiting with 3, 4 and soon 5G.  Each of them contributes to the amount of electrosmog. With 5G, we will need more antennas," confirms Jürg Baumann. CLR 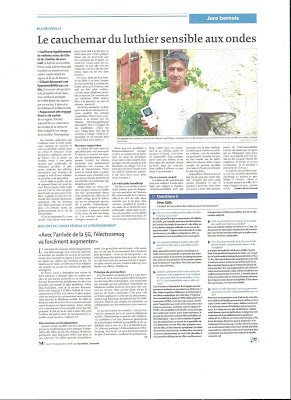