Physics and toxicology expert: 5G plus self-driving cars creates opportunity for class-action lawsuit against telecoms and auto industry due to health effects. “How can you allow this?” (VIDEO + transcript)
Posted on March 2, 2019 by admin, smartmeterharm.org 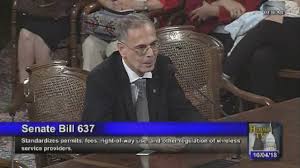 Dr. Paul Héroux PhD is a physicist and a toxicologist. He is Professor of Toxicology and Health Effects of Electromagnetism, McGill University. He is also the Director of the Occupational Health Program within the Department of Epidemiology, Biostatistics and Occupational Health.

Chairman Gary Glenn: Our next witness is going to be Paul Héroux from McGill University. Again, you have 5 minutes, sir.

I want to tackle the subject of insurance.

You know that neither Lloyd’s of London, nor Swiss Re will underwrite liability policies for electromagnetic radiation because they think the health risk is too great. In other words, they believe that when the lawyers get involved, and I know many of them, the companies who deliver this radiation to the public could be wiped-out.

By combining 5G and self-driving cars equipped with radar, you would create an exceptional opportunity for a class-action lawsuit against both telcos and the car industry.

I don’t know how you can support the deployment of 5G – a new cellular system that will seriously enhance human exposure to electromagnetic radiation – when you know what Dr.[Sharon] Goldberg just told you. And you know that the modulation that is introduced by 5G is a new threat on biological systems.

You know that all human cancers (and I use cancer as the, so to speak, the example here, although there’s many health effects from this radiation, because it’s the most closely documented, because we have a long history, bad history, with cancer) all human cancers – leukemia, colon, breast cancer, lung cancer – respond to electromagnetic radiation levels 100s of times below the FCC recommendations.

By the way, the FCC have zero medical and biological expertise.They take their marching orders from the Institute of Electrical [and] Electronics Engineers. And while this institution was setting the standards, I was present, and I know how lightheartedly they suppress any information that would impair the development of their applications. They just didn’t want to hear about it. So, it was never considered.

How can you allow this when the International Agency for Research on Cancer, the foremost authority on human cancers, warned you twice in 2002 and in 2012, about the link between electromagnetic radiation and cancer in humans?

The environment has to be cleaned up of electromagnetic radiation progressively, not augmented in radiation.

Electromagnetic radiation has repeatedly been linked with cancer in animals.

Chou in 1992 reported with 200 rats a multiplication by 4 of primary malignancies in animals exposed.

This year, the National Toxicology Program is reporting strong evidence of similar results with 1,440 rats and 1,680 mice. Finally, also this year, the Ramazzini Institute in Italy is confirming the NTP results using 2,448 male and female rats.

So I urge you, don’t listen to me. Listen to the advice of 4,288 rats and 1, 680 mice that were put in a carefully controlled situation and are telling you that cancer, for only one disease, is enhanced by this radiation.

Diabetes is 25% of your health budget. If electromagnetic radiation enhances this even a little bit, look at the costs that this entails.

These rats were not biased. They couldn’t be. They developed tumors as a result of the radiation to the best that science can determine. And there is a group of people that are hypersensitive to these fields, confirming that the effect is real. And these people have genetic variations that we understand cause or, you know, are linked to the electromagnetic radiation.

What America needed a long time ago was a chicken in every pot. Now what America needs is a fiber, an optical fiber, in every home. The data has to come through, but wireless radiation is, unfortunately, a bad idea.

Chairman Glenn: Thank you, Mr. Héroux, and if you would briefly, what are your credentials with McGill University?

Chairman Glenn: All right. Thank you. Rep Dianda, do you have a question of this testifier? Okay. Representative Elder.

Rep. Brian Elder: Thank you, Mr. Chairman. Good morning, and thank you for your testimony today. Just to let you know, some of us are Truman Democrats; we still think there should be a chicken in every pot.

At the beginning of your testimony, you indicated concern that implementation of this technology will cause liability to the auto industry.

Rep. Elder: Are you aware that both the General Motors Corporation and the Ford Motor Company are in support of this bill, because they feel it’s necessary for their autonomous vehicle future?

Dr. Héroux: Look, historically this industry does not have a good record of making good choices.

GM’s original view on car crash safety was that “cars don’t cause accidents; drivers do.”

Remember these heavy cars with big bumpers that were full of chrome everywhere, you know, that were killing machines rather than meant to be used by humans?

And another example is that as a result of GM’s policy of supporting the inclusion of tetraethyl lead in gasoline instead of ethanol, many decades ago, 15 million U.S. children lost 10 IQ points and had permanent problems with hyperactivity, behavior, and learning.

So don’t tell me that we have to follow the recommendations of the captains of industry, because I worked in industry for more than a decade. And I love these people, but their focus is so great on what they’re doing. They want to serve, but their focus is incredibly directed to their task.

They have no knowledge of health effects of their works, and this creates a schism within society that we have to bridge. And unfortunately, this may fall upon you.