This article includes a 3-min. video on the subject, presented by Sam Roe, the Chicago Tribune journalist who wrote the initial article on the cell phone testing. (The article has limited access so one may not be able to view the video.) 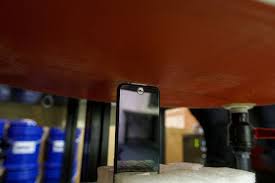 Video caption: A new class-action lawsuit against Apple and Samsung alleges the cellphone makers “intentionally misrepresented" the safety of the devices, citing a Chicago Tribune investigation that tested popular smartphones for radiofrequency radiation and found some results over the federal exposure limit.

A group of lawyers has filed a federal class-action lawsuit against Apple and Samsung, citing a Tribune investigation that tested popular cellphones for radiofrequency radiation and found some results over the federal exposure limit. The lawsuit — filed Friday in California, Illinois and Iowa — alleges that the phone makers “intentionally misrepresented" the safety of their devices, assuring users that the phones had been adequately tested and “were safe to use on and in close proximity to their bodies.”

The complaint, which alleges “negligence, breach of warranty, consumer fraud and unjust enrichment,” seeks an unspecified amount of money and medical monitoring for anyone who bought an iPhone 7, iPhone 8, iPhone X, Galaxy S8, Galaxy S9 or Galaxy J3.

The Tribune commissioned tests of 11 models of cellphones made by four companies, including the six models mentioned in the suit. The newspaper stated that the intention was not to rank phone models for safety and noted it was not possible to say whether any of the devices tested could cause harm.

But the tests, conducted according to federal guidelines at an accredited lab, found that radiofrequency radiation from some models operating at full power measured over the exposure limit set by the Federal Communications Commission. The FCC said it would pursue its own testing after the agency reviewed the Tribune’s lab reports.

Before any phone model can be brought to market, a sample must be tested for compliance with the exposure limit for radiofrequency radiation. In one phase of Tribune’s testing, the phones were positioned at the same distance from a simulated human body as the manufacturers chose for their premarket tests — between 5 and 15 millimeters, depending on the model.

In this phase, all three Samsung phones tested measured under the safety limit. Results varied for Apple phones, but several iPhone 7s were tested and all results exceeded the limit.

The Tribune also tested all the phone models at a consistent and closer distance of 2 millimeters, to estimate the potential exposure for an owner using the phone in a pants or shirt pocket.

In that phase of testing, most of the models tested yielded results that were over the exposure limit, sometimes far exceeding it. At 2 millimeters, the results from the three Samsungs and several iPhone models — again, operating at full power — were higher than the standard.

Two days after the Tribune published its investigation, the lawsuit was filed in U.S. district court in San Jose, California, alleging that Apple and Samsung “market and sell some of the most popular smartphones in the world ... as emitting less RF radiation” than the legal limit.

The suit was filed by three firms with lawyers experienced with class-action lawsuits, including Chicago law firm Fegan Scott. One of its lawyers, Elizabeth Fegan, represents alleged victims of disgraced Hollywood mogul Harvey Weinstein and has worked on cases alleging that the NCAA mishandled student-athlete concussions and that the city of Chicago’s work on water pipes has increased the risks of lead poisoning.

Representatives with Apple and Samsung did not return emails seeking comment.

Apple previously has disputed the Tribune’s results, saying the lab used by the newspaper did not test the phones the same way it does. Apple and Samsung both have told the Tribune their phones comply with federal standards.

The lawsuit argues that recent research has shown radiofrequency radiation exposure "affects living organisms at levels well below most international and national guidelines.”

“Thus," the suit claims, “defendants’ design, manufacture, and sale of smartphones that far exceed federal guidelines exacerbates the health risks to Plaintiffs and the Classes.”

High levels of radiofrequency radiation can heat biological tissue and cause harm. Less understood is whether people, especially children, are at risk for health effects from exposure to low levels over many years of cellphone use.

“Most studies of people published so far have not found a link between cellphone use and the development of tumors. However, these studies have had some important limitations that make them unlikely to end the controversy about whether cellphone use affects cancer risk,” the American Cancer Society says on its website.

Authorities in the 1990s set the federal exposure limit based solely on the heating risks of cellphone radiation, building in a 50-fold safety factor. But some researchers — and lawyers — have questioned whether the limit is safe enough.

In 2001, the debate spawned a lawsuit alleging that the standard didn’t protect consumers and that phone makers, carriers and trade groups were liable for cancers that struck plaintiffs who’d used cellphones.

The courts later consolidated that suit, filed in the District of Columbia courts, with others making similar allegations. In 2009, an appellate court dismissed claims about cellphones that met the federal standard but left open some claims of harm from phones that didn’t meet the standard.

Since then, the courts have tied even more lawsuits to the case. Apple and Samsung are among the named defendants, along with other major phone manufacturers. The 18-year-old case has yet to go to trial as legal fights continue; lawyers are now battling the extent to which the plaintiffs’ experts can scientifically link radiofrequency radiation to cancer.

The defendants have argued there’s no link.

A plaintiffs’ lawyer long involved with the case, Rudie Soileau, told the Tribune that the case has been “stuck in this procedural quagmire for years” and has yet to get to a point where he and his colleagues can access internal company documents on how the firms tested whether phones met the federal standard.

Fegan, the lawyer involved with the new lawsuit, said her group’s argument focuses more on the marketing of the phones than links to poor health effects.

“We’re not trying to prove any one individual’s cancer or ill effects are from the phone,” she said. “We’re saying manufacturers, under consumer fraud laws, have a duty to tell the truth.”

Joe Mahr is an investigative reporter. An Ohio University graduate, Mahr worked at four newspapers in Missouri, Illinois and Ohio before joining the Tribune in 2009. He was on one team that won a Pulitzer Prize in 2004 and another that was a finalist in 2015.