Phonegate : [Breaking News] The Recommendations of ANSES Call Upon the Public Authorities and Industry to Face their Health Responsibilities 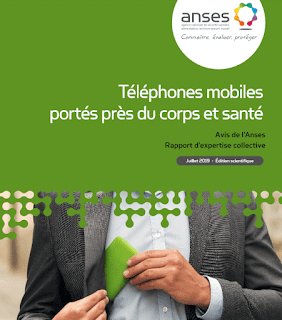 The French National Agency for Food, Environmental and Occupational Health and Safety (ANSES) has just made public the first part of its expert group report entitled “Mobile phones close to the body and health“, dated July 2019. For Dr. Marc Arazi, who launched the alert on the Phonegate scandal in July 2016:

“This is undoubtedly a great step forward and a tremendous recognition for our international alert action. The public and industrial authorities are now faced with their responsibilities and must inform mobile phone users of the health risks involved.”

This had been expected since the end of 2017, following our appeal to the public authorities and the request made by the General Directorate of Health (Ministry for Solidarity and Health) and the Directorate of Risk Prevention (Ministry for the Ecological and Inclusive Transition) to ANSES to be informed of the health risks for adults and children exposed to specific absorption rate (SAR) levels of more than 2 W/kg (European legal limit).

In the next few days, we are going to analyze this 128-page report with the members of our international scientific committee.

Our initial reaction, however, to the recommendations of ANSES is positive. Here is the conclusion of the report signed by the Director General of ANSES, Roger Genet:

“ANSES endorses the conclusions and recommendations of its expert committee. Mobile phones placed on the market until 13 June 2016, and potentially until 12 June 2017, were commercialized in the context of conditions of use “foreseen by the manufacturer” (i.e. with a minimum distance of use of 0-25mm from the body, apart from the head). For a majority of the phones tested by ANFR, they had SAR trunk values measured in contact with the body of more than 2 W/kg. The average duration of use of a phone is a few years (3-5 years), so a number of these phones are probably still in use today. Thus, given that the SAR limit value (2 W/kg) has been exceeded for a large number of phones placed on the market under the previous European directive (R&TTE) when used in contact with the trunk, the evolution of practices has led to increasing use close to the body (very small or no distance between the device and the body), and uncertainties about various long-term health effects, the Agency recommends that measures be taken to ensure that users are no longer exposed to SARs exceeding 2 W/kg from phones certified under the R&TTE Directive (placed on the market until 13 June 2016 or even until 12 June 2017). To this end, the Agency considers that the measures taken by manufacturers similar to those taken for phones placed on the market after 13 June 2016 and appearing non-compliant following ANFR controls in 2017, would make it possible to achieve this objective: software updates, phone recalls… Pending the implementation of such measures, the Agency invites users of these devices to comply with the operating instructions (distance) mentioned by manufacturers in the instructions when placed near the trunk.

“Finally, the Agency recommends that the regulatory provisions relating to the distance from radioelectric devices that can be placed near the body be modified so that compliance verification measures for SARs are carried out on contact (0mm).” *

This is in line with all the points of our appeal launched in Paris in June 2018, in the presence of Dr. Annie Sasco (France) and Dr. Devra Davis (USA). It called for the withdrawal or updating of more than 250 mobile phone models whose SAR control measures far exceeded the limits above which users are considered to be at risk for their health.

We are asking Mrs. Buzyn, Minister for Solidarity and Health, Mrs. Borne, Minister for the Ecological and Inclusive Transition, and Mr. Lemaire, Minister of Economy and Finance, to receive us in order to put in place, without delay:


• the recommendations of ANSES regarding the withdrawal and updating of the hundreds of mobile phones concerned;
• the launch of an information campaign to encourage changes in ways of use, especially among the youngest users.