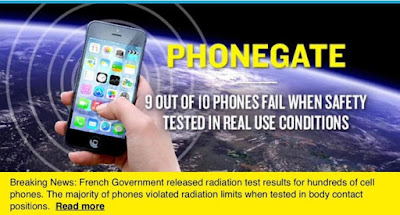 Following is an extract from our post, "Time to Wake Up to the Global Public Health Issue of Phonegate" (17 September 2019 update).  We have updated the section on SAR tests conducted by the French National Frequencies Agency (ANFR) on cell phones in contact with the body, to explain in more detail the issues raised in the report by ANSES (French National Agency for Food, Environmental and Occupational Health & Safety), "Mobile Phones Close to the Body and Health" ("Téléphones mobiles portés près du corps et santé").

In July 2016, a scientific report was published by the French National Agency for Food, Environmental and Occupational Health and Safety (ANSES), entitled, “Exposure to Radiofrequencies and Child Health”. The ANSES Report highlighted the results of the French National Frequencies Agency (ANFR) 2015 measurement tests of 95 mobile phones tested in body contact positions – meaning, with no separation distance. ANSES announced that 9 out of 10 mobile phones tested in contact with the skin exceeded the regulatory threshold of 2 W/kg, some of them more than three times.

Upon discovery of this information, French physician Dr. Marc Arazi and now the Phonegate Alert Association, took legal action to get ANFR to make public, in June 2017 and March 2018, data concerning the SAR tests carried out in contact with the body on 454 cell phones. The tests revealed that 9 out of 10 cell phones checked in 2015 and 20% of phones tested in France in the first half of 2018 exceed the SAR trunk value. These results were kept secret from consumers. The test results of some phones were as high as more than 20 times the manufacturer’s previously reported SAR levels. Phonegate Alert is continuing its legal actions to obtain the publication of new data.
See ANFR data:
https://data.anfr.fr/anfr/visualisation?id=ad8014ec-f631-450e-a259-799188714ef9

The phones tested by ANFR are among the most popular brands used by consumers.

Of 22 cell phone models, 18 have been withdrawn from the market or updated and 9 are the subject of class actions/criminal complaints in France

Due to the pressure of Phonegate’s action, since April 2018, 18 cell phone models have been withdrawn from the market or updated for exceeding the SAR threshold. Five mobile phones were withdrawn, including the Hapi 30 (affecting nearly 100,000 consumers in France), and 13 others updated. Recently, tests carried out on the Redmi Note 5 manufactured by the Chinese company Xiaomi, revealed that the SAR head exceeded the regulatory value. In April 2019, ANFR issued press releases stating that the Nokia 5 and Nokia 3 cell phones exceed the SAR trunk value. Their software has been updated by the manufacturer. On 16 July 2019, ANFR announced that the Nokia 6.1 (TA-1043) smartphone exceeded the SAR trunk value. HMD GLOBAL OY opted for an update of the phone.

In a press release published on 25 July 2019, ANFR) announced the withdrawal of two new smartphones marketed by the Malaysian company LEAGOO INTELLIGENCE CO. and by the Romanian company S.C. VISUAL FAN SRL. The test controls of the SAR trunk of these phones carried out in August and October 2018 by an approved laboratory showed a SAR of 2.39 W/kg for the LEAGOO S8 phone and 4.6 W/kg for the ALLVIEW X4 SOUL MINI S phone. A ministerial decree of 12 July 2019, published in the Journal officiel de la République française on 20 July 2019, now prohibits the placing on the market and putting into service of these two phones. This is the first time such a procedure has been used.

ANFR had given notice to the two companies to take all necessary measures to put an end to the non-compliance of these devices. In the absence of a response from the companies, ANFR decided to proceed with the withdrawal and recall of the two phones concerned from the market.

On 4 October 2019, ANFR announced the withdrawal from the market and the recall of the ECHO Horizon Lite phone following measures to control the SAR “trunk” which revealed that the authorized regulatory limit had been exceeded. ANFR also sanctioned the French distribution company MODELABS MOBILES, which markets this model, with an administrative fine of €7,500. The SAR “trunk” of the Echo Horizon Lite was measured at 2.38W/kg in May 2018 and at a higher level of 2.84 W/kg after ANFR requested the update of this phone.

Nine cell phone models are the subject of class actions/criminal complaints in France.

Since the transposition into French law of the European Radio Equipment Directive (RED) in June 2017 establishing a regulatory framework for placing radio equipment on the market, ANFR can impose administrative sanctions in the event of devices exceeding the SAR threshold including administrative fines (€ 7,500 for a legal entity), requests for withdrawal from the market and recall of devices already purchased.

The ANFR data reveal that 250 cell phone models exceed the regulatory limits and must be removed from the market. These phones continue to be sold not only in France and Europe but also in many other countries. It is time that the European and international authorities take action to protect the health of users. See:
https://www.phonegatealert.org/en/check-if-your-mobile-phone-presents-a-risk-to-your-health