A class action lawsuit says that the radiation produced by Apple and Samsung phones exceeds the amount of radiofrequency radiation legally allowed by Canada’s government. 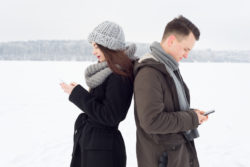 The class action lawsuit was filed by Tracey Arial, Claire O’Brien, Erika Patton, Alex Tasciyan, Mathew Nucciaroni, and Vito DeCicco, who say they all own and use phones made by Samsung and Apple.

Allegedly, she has taken precautionary measures to minimize her exposure to the phone’s radiation, including using air tube headphones and using speakerphone. She says that she even carries the phone in a shielded radiation-reducing pouch when she streams media.

Arial says that despite her precautions, she has been damaged by exposure to radiation, and is at risk for problems associated with the exposure.

The Canada Apple, Samsung radiation class action lawsuit says that Apple and Samsung actively advertise that their phones are safe for extended use close to the body. However, the phones marketed as such allegedly often expose users to radiation that exceeds legal regulations by as much as 500 percent.

The Apple and Samsung cell phone radiation exposure class action lawsuit claims that numerous scientific publications have shown that radiofrequency radiation exposure can cause damage to living beings even when it occurs at levels below most national and international guidelines.

The cell phone users say that the companies are aware or should be aware of the possible impacts of radiation exposure, but advertise the phones as safe in the interest of their own profits.

The plaintiffs also state that they and many other customers would not have purchased their phones or would not have used them as they did, had they known that the phones could put them at risk for harmful radiation exposure.

The phone owners say that they were injured by this radiation exposure. They seek damages on behalf of themselves and other people who are similarly affected.

Have you purchased a cell phone, believing it to be safe for everyday, prolonged use? Tell us more.

The Canadian cell phone users are represented by Charles O’Brien of Lorax Litigation.