Russia: The Federation Council Announced the Preparation of a Law Governing Electromagnetic Radiation 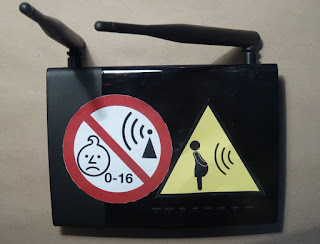 The Federation Council supported the proposal of the Russian National Committee for Protection against Nonionizing Radiation to label sources of electromagnetic fields.

We are talking about sticker signs, which are designed to protect the population from uncontrolled contact with mobile phones, tablets, computers, Wi-Fi routers. Scientists told the Federal News Agency [FAN] at the All-Russian Conference about the new development .

“People should know that this is dangerous and harmful to health,” Vladimir Krugly, member of the Federation Council Committee on Social Policy, told the FAN correspondent.  "We write "smoking harms your health." In the same way, it can be written on the phone that the phone is harmful to your health."

Prolonged and frequent contact with gadgets, cellular base stations and other sources of EMF can be harmful. This conclusion comes more and more scientists from around the world. In their opinion, the effects of electromagnetic radiation accumulate in the human body and provoke a malfunction in the work of  systems. So says the doctor of physical and mathematical sciences Alexander Dmitriev, who, together with a group of scientists of the Russian Academy of Sciences, developed this summer Russia's first personal dosimeter of electromagnetic radiation.

"There are statistics on brain diseases, including cancer, over the past decade. It follows: when the era of the use of cell phones began, the number of oncological diseases gradually began to increase,” said the head of the telecommunications laboratory of the Institute of Radio Engineering and Electronics named after V.A. Kotelnikov RAS.

According to Alexander Dmitriev, this is not rigorous evidence, but it raises serious concerns in the scientific community.

“We are talking about declining birth rates. Including, perhaps, this is the effect of electromagnetic radiation, ”says Vladimir Krugly, Honored Doctor of Russia. “That is, we need scientific developments that should be funded by the State.”

The first deputy chairman of the committee on education and science of the State Duma of the Russian Federation Gennady Onishchenko believes: developing telecommunications and information technologies, the state, first of all, should guarantee their safety.

“The layman must be taught to avoid the danger that really is. And in our house there are TVs, computers, electric stoves, everything is there. There is a power line through residential neighborhoods, this is also pollution. But these are all flowers. And the berries are the fact that we have two devices under each ear. Here I have two SIM cards, and here are two SIM cards! ”- the epidemiologist shows on the phones on his desktop.

Sources of electromagnetic pollution are base stations of cellular communications, the MP added.

“This issue, of course, should be normalized,” the parliamentarian said.

“It affects my grandchildren. The activity is reduced, they are more often exposed to diseases, the level of digestibility of the subject is reduced, there is no perseverance. They can’t concentrate, understand? ”- Nina Yeryukhina, a teacher of the Russian Federation, shared with the FAN correspondent .
According to her, the parent community needs help because it does not know how to deal with this problem.

“My daughter understands that it is impossible, for example, to allow more than 30 minutes, according to age, to be behind these gadgets. But this is unrealistic to do! Tantrums are arranged, anything, ”admitted the class teacher of Russian Prime Minister Dmitry Medvedev .

One marking of mobile phones and computers cannot fix the situation, experts say. In their opinion, the country needs a special scientific and practical center that will give a start to new research and state standards.

“We need to create a working structure that will overcome interagency contradictions and solve this problem. It will allow, on the one hand, the inhabitants of our country to live in peace, not to be afraid for their health and behavior in the context of the development of new technologies and, on the other hand, to develop these technologies for the good and use them,”says Dr. Sc. (Biol.), Chairman of the Russian National Committee on protection against non-ionizing radiation Oleg Grigoriev .

Nina Yeryukhina proposed the development of universal standards and restrictions on the use of gadgets for all schools in the country.

“They sometimes exist. The principal, for example, does not allow the use of a mobile phone in schools, but it depends on his personality. And this should be at the level of the state program and the law, ”she said.

According to Senator Vladimir Krugly, the second year is spoken about the effect of electromagnetic radiation on human health in the Federation Council.

A working group of the expert council was created in our committee, which held round tables with the participation of various experts. We prepared an analytical report, submitted it to the government, to the Ministry of Communications of the Russian Federation, but there were no special reactions there, the senator said. “We had a conversation with the former Minister of Communications about the Federal Target Program.”

The proposals of the scientific and expert communities will be taken into account in the new bill, said the Honored Doctor of Russia.

“We are now starting work on a law that would regulate electromagnetic radiation. Today it will be the most effective tool, ”Vladimir Krugly told the FAN correspondent.

The legislative initiative, as the senator said, is already being dealt with by a working group under the committee of the Federation Council on social policy.

Earlier, Russian scientists completed a 14-year study on the effects of radiation from smartphones and cell phones on children and concluded that technology negatively affects the health of the younger generation.