Switzerland: Shame on Roger Federer for Advertising in Favor of 5G Technology!

The Swiss tennis champ, Roger Federer, has been advertising in favor of 5G technology.  We sent him this letter last year.  He never replied.

We are extremely disappointed that you have accepted to participate in advertising in favor of 5G technology. 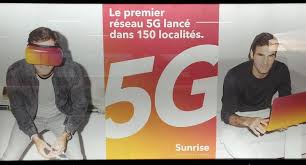 You have small children and should be aware that this technology will be adding to the health effects of radiofrequency radiation (RFR) already being emitted by previous technologies, 2G, 3G, 4G. Children, with their smaller, developing bodies, are especially vulnerable to this type of radiation.

Your advertising is also in direct contradiction to the democratic vote of the Swiss Parliament – and the voice of the people - last year not to raise limit values of mobile phone antennas as a requirement for the launch of 5G.

The presence of billions of connected objects will make us more stressed, vulnerable to cybercrime, disconnected and poisoned by RF radiation. Health services will be under pressure to cope with a pandemic of diseases resulting from increased exposure. The economy will be affected by rising health costs and lost productivity at work.

A number of groups have expressed strong precautions regarding the rollout of 5G technology before studies have proven it will not harm health: Médecins en faveur de l'environnement, Union suisse des paysans, HabitatDurable, Fédération suisse des patients and the Fédération des médecins suisses (FMH) whose Vice President recently stated on Swiss national television (Mise au Point) that radiofrequency radiation of the kind emitted by wireless technologies will increase the risk for nervous system cancers. One of the recent studies on 5G shows that the millimetre waves characterizing 5G could increase skin temperature, alter gene expression, promote inflammatory processes, and generate eye damage. Other studies mention the negative impact of radiofrequency waves on insects and bees, one of the factors that could explain their disappearance.

We sincerely hope you will renounce advertising of 5G.