Ticks Are Attracted to Cell Phones

Ticks are attracted to cell phones
by Jocelyn Rochat, Tribune de Genève, ABO+, 10 June 2020 - translation
A study shows that these mites, especially those that are infected, react to the electromagnetic fields emitted by smartphones. instead of the noise of incoming messages.
[Abstract of study: "Infected Ixodes ricinus ticks are attracted by electromagnetic radiation of 900 MH", March 2020:
https://www.researchgate.net/publication/340043868_Infected_Ixodes_ricinus_ticks_are_attracted_by_electromagnetic_radiation_of_900_MH  ] 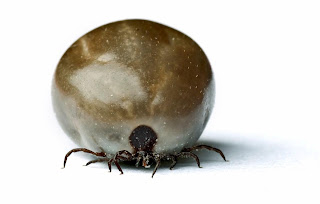 If you like to walk around, you should get into the habit of turning off your mobile phone before going into the woods. Because ticks are attracted to the radiation from smartphones. At least, that's the conclusion of a recent study that reveals that 900 MHz electromagnetic fields affect the behavior of ricinus Ixodes.

"This experiment was carried out by researchers from Eastern Europe in Poland and Slovakia who are still working on these issues, whereas in our region, ticks are no longer really studied, even though Lyme disease is progressing in our regions," observes Daniel Cherix.

The UNIL honorary professor spotted this work in the highly specialized journal "Ticks and Tick-borne Diseases", where it has just been published, and mentioned it in his column "Monsieur Jardinier".

The lead author of the article, Martyna Fratczak, from the University of Poznan, explains that the team collected adult ticks from lizard and bird corpses to form a sample of 160 males and 140 females of the species Ixodes ricinus. The ticks were then placed unfed in the equivalent of a "space capsule", a Y-shaped tube with only one end exposed to electromagnetic radiation.

In order to avoid any other influence, the tube was placed in total darkness, where the ticks were deprived of all their olfactory and gustatory cues, with the exception of waves at a frequency of 900 MHz, which are those emitted by the majority of mobile phones. And the researchers looked at the direction in which the small parasites were heading.

"The article is well done, with a good sampling, and the experiment is giving very clear and astonishing results," notes Daniel Cherix. As the ticks had only two routes to choose from and 80% of them settled in the irradiated zone, the experiment showed that mites are sensitive to electromagnetic fields, especially those carrying bacteria (such as Rickettsiae and Borrelia, the agent of Lyme disease or borreliosis), which were much more attracted than the others.

For his part, the biologist and Valaisan tick specialist Olivier Péter is not surprised:

"Dust mites are stimulated and prove to be sensitive to electronic radiation. This would be one more factor in awakening the tick. We know that many potential factors can stimulate a tick, which spends 99% of its life waiting for potential prey. These include temperature, vibrations, odors such as pheromones, carbon dioxide exhaled by mammals while breathing. Having said that, I'm not sure that this additional factor is a determining factor compared to tick bites on humans. It's still a possibility, but it's not demonstrated in this study."

More convinced by the experience, Daniel Cherix now recommends turning off the mobile phone before going for a walk in the wild, "because ticks also seem to be sensitive to phones in airplane mode. Otherwise, there is the option of walking under a telephone antenna, since the study also shows that their radiation, which is much more powerful than that of telephones, makes the ticks flee".

And for Martyna Fratczak, "this is certainly bad news for people who don't part with their phones, even in the wild. But good news for those who want to enjoy the trees and birds in the forest instead of the noise of incoming messages."