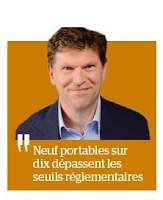 Among mobile operators, competition is fierce on sites, networks and rate plans. Not everyone shares this frenzy, with some warning of the dangers of 5G, while awaiting a forthcoming report from ANSES. Because it is frightening and raises immense expectations, this technology is of double interest to the healthcare world. Our two points of view bear witness to this.
The point of view of Dr. Marc Arazi*
Mobile waves, the next international health scandal
1G, 2G, 3G, 4G and now 5G. A technological revolution that has put radio frequency (RF) waves, those of our cell phones, tablets, connected objects, relay antennas and Wifi at the heart of our lives and our societies.
For the past 30 years, the industry and its lobbies have been constantly asserting, with the support of scientific experts from the industry, that there is no risk linked to RF for human health. They have found national and international agencies and public authorities perfectly willing to believe them almost at their word. Elements of language to support their perfect demonstration, they have flooded the planet with their readiness to think of "no danger, use in peace".
And we have to admit that, in just a few years, we have become completely addicted to these fantastic concentrations of technology. They no longer leave us from morning to night; they are in our ears, in our pockets, and even in our beds.
We didn't know that the regulations that were supposed to protect our health from the radio waves of our mobiles were totally inadequate. It was the National Agency for Food, Environmental and Occupational Health & Safety (ANSES) that revealed the truth, in July 2016, in a report entitled "Exposure to Radiofrequencies and Child Health". In this opinion, which went completely unnoticed at the time, ANSES tells us that 9 out of 10 cell phones tested by the National Frequency Agency in 2015 exceed the regulatory limits for specific absorption rates (SAR) measured at body level (2 W/kg). And its managing director, Roger Genet, to launch an appeal to the public authorities to urgently and thoroughly review the limits of exposure thresholds for the general public.

The "bomb" will not explode! No media will pursue the investigation of what will become a few months later the "Phonegate" scandal. A mixture of the asbestos and Dieselgate scandals. A European and international regulation more than lax, phones prepared during certification, software in our mobile phones that can vary the SAR during the rare controls. An infernal machine that has had the consequences of overexposing us all in an acute and chronic way for more than 20 years.
To control information, this overpowering industry has muzzled public authority, has become a shareholder in the most influential media and has placed these people in strategic positions.
The urgency of a moratoire on 5G
Some claim that there has been no increase in brain cancer. This is what Dr. Michel Cymes said last December on RTL about 5G. This is what the popular French doctor explained: "According to research, there is no increase in brain cancer cases in the Western world, where the cell phone has become widespread. ».
However, this assertion is totally contradicted by the statistics published in 2019 by Santé publique France. Between 1990 and 2018, the annual number of new cases of glioblastoma was multiplied by four and more for both sexes. In conclusion of its analysis, the health agency considers that: "...The latest epidemiological studies and animal experiments are in favor of the carcinogenic role of exposure to electromagnetic fields [15]".
There are also nearly 3 million electro-hypersensitive people (2018 ANSES figures) who suffer from the development of mobile telephony and who will suffer even more with the exponential increase linked to 5G radio waves everywhere around us (urban equipment), as well as in space.
Independent international scientists as well as many healthcare professionals are calling for a moratorium before any deployment of 5G. This call was recently echoed by the 150 French members of the "citizens' convention". But nothing has been done about it, the government has pocketed nearly 3 billion euros from cell phone operators and launched 5G without even waiting for the ANSES's opinion. In the middle of "Phonegate", such a decision is irresponsible!
*Author of "Phonegate" (Massot éditions) 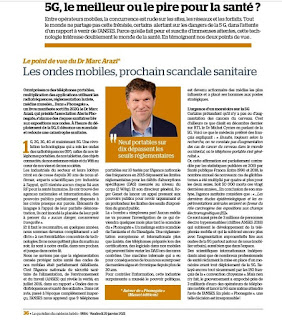