Dangers of Smartphones for Health: We Will No Longer Be Able to Say We Didn't Know

Dangers of smartphones for health: we will no longer be able to say we didn't know
by José Vieira, bioaddict.fr, 9 Feb. 2021 - translation
Are we all overexposed to electromagnetic waves and endangered by our cell phones? Yes! says Dr. Marc Arazi in his book "Phonegate" published by Editions Massot. A book in which he explains the incredible omerta on the risks of smartphones imposed by manufacturers with the complicity of official bodies, and his fight to establish and spread the truth. 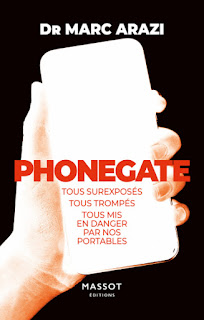 I thought I knew a lot about the health risks of cell phones. I also suspected that smartphone manufacturers were exerting powerful pressure to impose their products at all costs. I've been interested in this issue for many years. But when I read the book that Dr. Marc Arazi has just published by Editions Massot, I realized with amazement that I didn't actually know much about it. Neither about all the potential health risks of electromagnetic waves emitted by smartphones, nor about the manipulations of the manufacturers, nor about the scandalous complicity of the official organizations in charge of user protection ...
In his book, Phonegate, written like a true thriller, Dr. Marc Arazi* describes, step by step, day by day, his fight that began in 2004. He details the multiple obstacles he encountered with manufacturers, but also, incredibly, with the National Frequency Agency, to obtain information on the studies on the health effects of these radio waves to which we are subjected when using our smartphones.

He explains his discovery of the estimates concerning the determination of the SAR (Specific Absorption Rate), this indicator which sets the threshold of danger of the radio waves. His discovery of the manipulations of manufacturers to lower this SAR, as did the automobile manufacturers of diesel vehicles... Its discovery, finally, scientific evidence concerning the harmful effects of electromagnetic waves, for our health.
Faced with this scandal, as a doctor worthy of the name, he became a whistleblower. And after a long crossing of the desert, nobody believing in his "story", with incredible courage, boundless self-sacrifice, and unfailing tenacity, he was finally heard. Today, scientists, journalists from all over the world, and elected officials, more and more numerous and worried by the arrival of 5G, support him in his fight.
In his book, Dr. Arazi doesn't say that smartphones should be thrown in the trash. What he calls for is full transparency about their potential dangers, the application of precautionary principles, and clear information about the least harmful way to use them.
A fascinating book, a must read to fully understand the extent of the battle around our dear smartphones, the health risks they pose, especially to our children, and how to protect ourselves from them.
José Vieira
* Dr. Arazi is the President of the NGO " Phonegate Alert ".