Note from Dr. Joel Moscowitz, University of California, Berkeley: That the National Cancer Center of South Korea has now decided to issue a press release promoting the results of our study (published last November) seems significant because, like the U.S., the telecom industry in South Korea is very powerful. If this news story is reported by the popular press, people may take more precautions in using cell phones. 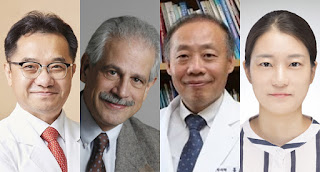 (Photo): From left: Corresponding author Seung-kwon Myung, Professor of National Cancer Center, co-first author Dr. Joel Moskowitz, co-author Hong Yun-cheol, Seoul Medical University professor, and first author Choi Yoon-jung, Ph.D.
Prof. Seung-Kwon Myung (President of Graduate School) of National Cancer Center, Professor of Preventive Medicine, Seoul Medical University, and Joel Moskowitz, Director of Center for Family and Community Health, UC Berkeley School of Public Health. It was revealed on the 15th that the meta-analysis of 46 case-control studies published in international journals from 1999 to 2015 revealed the result.
As a result of a meta-analysis of 46 research papers through literature search in the major medical databases, PUBMed and EMBASE, the researchers found the relationship between people who use mobile phones and those who do not did not make a big difference.
However, the results of detailed meta-analysis by major research groups and qualitative levels were different. Sweden's Hardell team, who published the most research on the subject, announced that the use of mobile phones increases the risk of developing tumors.
Professor Myung, who led the study, emphasized, "This study supports the results of some laboratory and animal studies that show that high-frequency electromagnetic fields (frequency 800-2000 MHz) exposed when using mobile phones can accelerate cancer development."
He said, “As a result of analyzing the reasons for the differences in the results of each research team, it was possible to confirm that the quality of the research, the response rate of the research subjects, and the availability of research funding from the mobile phone company were important factors.” The quality of the study is high, there is little difference in response rate between the patient group and the control group, while research funding is not provided from a mobile phone company, a multinational interphone study organized by the International Cancer Research Organization (IARC) under the World Health Organization The team's research was of low quality, there was a lot of difference in response rate, and the research funding was provided by mobile phone companies.”
He said, “The results of the Hardell research team's research that the use of mobile phones increases the risk of tumors can be interpreted as more convincing,” he said. “Moreover, regardless of the research team, the case of using a mobile phone for more than 1,000 hours* the tumor risk was statistically significantly higher (interval ratio 1.60, 95% confidence interval 1.12-2.30)”.
He continued, “Even before the dangers of cell phones are clearly identified, we recommend that you refrain from using cell phones for a long period of time based on the precautionary principle. It is necessary to reduce the use, and when using a mobile phone, keep it 2~3 centimeters away from the face and use earphones with wires as much as possible.”
The research results were published in the November 2020 issue of the International Journal of Environmental Research and Public Health, an international academic journal of SCIE.
* which corresponds to about 17 minutes per day over 10 years
Original press release in Korean:
http://www.docdocdoc.co.kr/news/articleView.html
Publié par MerisRM à l'adresse 1:05 PM