Phone users also exposed
Opinion, 24heures.ch, 11 March 2021 - English translation
Re article "New antennas for 5G would not be safe" ("24heures.ch" of 24 February 2021).
The Physicians for the Environment (MfE) consider that the new adaptive antennas for the extension of the 5G network do not guarantee a sufficient level of protection for humans.
Not only people living near these antennas will be exposed to more radio frequency (RF) radiation, but also users of wireless devices, leading to an increase in the number of people suffering from diseases, including microwave sickness (already estimated at about 10% of the population, or more than 800,000 people).
Largely ignored by health authorities, cell phone users are also victims of fraudulent practices by some manufacturers who test RF exposure using software that varies energy emission levels, thus compliant with international standards ("Phonegate" book by Dr. Marc Arazi). Tested in the way we use cell phones - close to the body (against the ear, in a pants pocket), the actual radiation levels of many of the most popular phones exceed the legal limits by three or even five times as the "Chicago Tribune" revealed in a 2019 investigation.
As MfE states, this increased radiation exposure is "unacceptable." Do we want current and future generations to suffer the health consequences of exposure to this type of radiation for the sake of consumer convenience and the financial greed of the industry?
Meris Michaels, Geneva 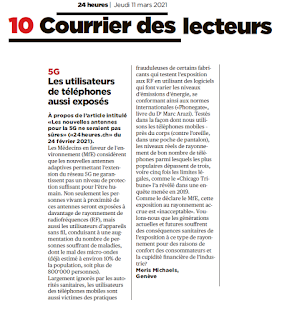