A judgment arrived after 10 years of battle. Cgil: "A historic pronouncement".
by Redazione, luccaindiretta.it- July 16, 2021 - auto-translation 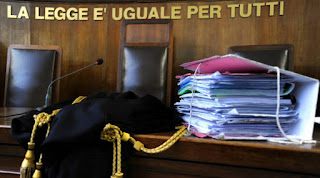 After 10 years of waiting, the Court of Appeal of Florence condemns Inail to compensation for occupational disease to three former employees of Enel in the province of Lucca. A victory for the Inca-Cgil of the province of Lucca and for the workers involved, although unfortunately the sentence came posthumously.

As a result of a unique judgment, the existence of an occupational disease that had never been recognized before has been established. The victims of this disease thus obtain the right to receive compensation in proportion to the degree of impairment, equal to 85% of arrears in addition to the right to a survivor's pension granted to the spouse.

"The story - explains the CGIL - began in 2011 when one of the persons we were assisting, 62 years old at the time, turned to the Inca Cgil Patronage of Marlia to obtain aid in the recognition of what he considered a disease caused by his previous work. It was multiple micromolecular myeloma, according to him resulting from exposure to electromagnetic waves and fields generated by high voltage power lines.   In fact, the man had worked for Enel from 1974 to 2005: over the years he had been involved in the installation and maintenance of telephone equipment and infrastructures, power supply systems, teleoperation and remote control machines, transmission apparatus and coupling devices with conveyed waves, VHF radio transmission apparatus, UHF radio links and SHF radio links.   Conveyed waves apparatuses ( OCV) were mainly installed at high voltage power lines, in situations of the presence of a strong electromagnetic field. Commissioning, testing and maintenance of radio links had been carried out mainly at repeaters, where many VHF, UHF and SHF receivers were installed, which locally cause a strong electromagnetic pollution.

The former Enel worker had therefore requested, with the help of the then head of the Inca office in Marlia, Patrizia Bertoncini, and of the medical examiner, Silvia Baldi, the recognition of the occupational disease, but the request was rejected. He was thus forced to resort to a judicial action, promoted with the patronage of the lawyer Carla Genovali before the court of Lucca. Here his case was joined to that of the widows of two colleagues who, like him, had worked for Enel for a good part of their lives, and who in the meantime had died of similar illnesses.

"The Inail - explains the Cgil - however, continued to challenge the claims of the injured parties and, despite two expert reports (one environmental and the other scientific) favorable to the arguments of the three workers, the court rejected the application based on a third report (medico-legal) negative.   The case was then brought before the Florence Court of Appeal, after all three cases had been closely followed by Dr. Baldi.  The Court of Appeal of Florence, faced with the documentation filed and especially in the light of the expert reports, both environmental and scientific, which had been previously ignored, assumed the existence of a causal link. It therefore appointed a new technical consultant to assess the extent of the damages suffered by the three workers, who acknowledged the existence of the occupational diseases reported. The Court, therefore, condemned Inail to pay the due indemnities".

"It was - explains the CGIL - the first jurisprudential recognition concerning blood diseases caused by exposure to electromagnetic waves.   The only bitterness that remains to the operators of the Patronato Inca Cgil, the forensic scientist Silvia Baldi and the lawyer Carla Genovali, is due to the impossibility of sharing the satisfaction for this result with their client. Unfortunately, in fact, shortly before the pronouncement of the sentence, the initiator of the action died as a result of the occupational disease reported".