First known cease and desist for cell tower due to injuries in United States will be effective in 7 days if Verizon does not come to the table. See article and video on site of Environmental Health Trust.
Cease and desist: Pittsfield Board of Health gives Verizon ultimatum over cell tower
By Meg Britton-Mehlisch, The Berkshire Eagle, Feb 3, 2022 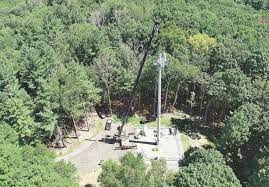 PITTSFIELD — The Board of Health is drawing a line in the sand in its ongoing negotiations with Verizon Wireless over a cell tower at 877 South St.
(Photo): An aerial view of the 115-foot monopole that Verizon Wireless erected in a south Pittsfield neighborhood in 2020. EAGLE FILE PHOTO

If the cell company doesn’t come to the table within the next two weeks to discuss removing or relocating the tower which neighbors have said for more than a year is the cause of headaches, hives and possibly cancer, then the Board of Health will issue Verizon a cease and desist order to have the tower turned off.
Chair Bobbi Orsi said that in her last four months with the board she’s been convinced by the testimony of residents, documents and diagnoses from local doctors, previous comments from health experts to the board and “a growing body of evidence” that there is a connection between the radio waves from the cell tower and residents’ health problems.


“It’s the purview of the board to be proactive in identifying health risks and protecting the public health as much as we possibly can,” Orsi said.

“I feel like we have an obligation, even though it’s a long shot.

“It’s hard to take on Verizon and the [Federal Communication Commission] and honestly, it’s expensive, it’s gonna take a lot of time, and the outcome may not be good,” she added. “But I don’t know what else we’ve got in our tool box.”

Orsi said that she consulted with City Solicitor Stephen Pagnotta before the meeting and was told that the board is within its authority to make this kind of move.

The board voted unanimously to give the company seven calendar days to notify the board that they are willing to “meet in an effort to resolve the issue” and demonstrate “sufficient commitment that they will do something that is satisfactory to the board.”

Members clarified that currently the only “satisfactory” solution would be to turn off the tower or move it.


The cell tower was erected during summer 2020, on a large parcel at 877 South St. bordering the Oliver and Plumb streets neighborhood off Holmes Road. Verizon switched on the tower the following September and residents said some neighbors, especially on Alma Street, began experiencing health problems that same day.

The tower — and the city’s permitting of its construction in 2017 — sparked an ongoing lawsuit, a series of reforms to city abutter notification rules and a request from the City Council for a state investigation.

Board members had no illusions about their David and Goliath story during the vote to issue the order on Wednesday night. For months the board has sent members to private discussions with the telecommunications company, hoping to appeal to their neighborly sensibilities and find a compromise between residents’ health and the company’s bottom line.

“I think that it’s a much bigger issue than the neighborhood for them, and they don’t want to set a precedent,” Board member Brad Gordon said. “When they go into a court hearing, or proceeding like this, they don’t view it as Pittsfield or a neighborhood — they view it as a national and international issue and they’re gonna approach it in that way.”

John Barrow, a Lenox resident who attended the meeting in support of the order, has been following the conversation around the Pittsfield tower as he advocates for increasing setbacks for cell towers proposed in Lenox. He said he hopes the board’s actions do set a precedent for the county.


“You can actually stop a process that’s been put in motion in Lenox and aim it in a different direction that’ll be healthier for everyone in the town,” Barrow said. “Whatever you can do to shut this down could be really good for the Berkshires in general to set some standards.”

Residents called the move “courageous” and a way to force an end to what they see as a “Groundhog Day” like series of events with repeating conversations but no real changes.

“You have a group of people sitting here behind you who’ve called in, they’ve been here, they’ve called the state, they’ve called the city over reporting injuries and health problems,” former Alma Street resident Gareth Coco said. “And yet here we are, still nothing done. Today is the day you make it right.”