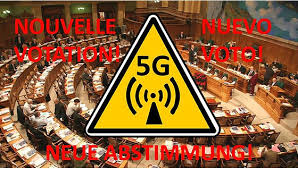 Since the allocation of 5G licenses to the three operators in Switzerland in February 2019, the deployment of this technology has encountered strong resistance from the population. Many new independent associations have been created to counter its development and have launched thousands of opposition procedures against new antennas and modifications to existing ones.

A representative survey of the comparison portal, Comparis, carried out in May 2022, showed that 41.7% of the population are opposed to the implementation of 5G. Another survey worth mentioning is from the ETH (Swiss Federal Institute of Technology in Zürich) where 60% of the population believe they are NOT adequately protected from EMF signals.

Over the years, a number of independent scientists, associations and politicians have warned about the dangers of EMF and conflicts of interest associated with this technology. The telecoms industry has continued to lobby changes to regulations trying to pressure and push the government into easing the so-called safety standards of exposure to non-ionizing radiation. Attempts to do so have been twice rejected.
One such motion initiated by the Radical-Liberal Party (PLR) would have, among others, limited public oppositions, restricted communal authority and also would have increased radiation exposure levels from the current 5 V/m to 20 V/m, a motion heavily condemned by long-standing and new opponents.

Before a crucial 5 September vote, opponents of 5G etc. personally wrote several letters to members of the Swiss Parliament’s Council of States drawing their attention to the dangers of increasing EMF radiation limit values of antennas. Seven associations in French-speaking Switzerland – Stop5G, ARRA, 5GFrei, 5G Moratoire, Stop 5G Glâne, Jura No 5G and Fribourg 4G suffit – also published a series of brochures in French and German to hand out to parliamentarians. The issue of health risks was raised, as well as technical, environmental and security issues.

On 5 September 2022, the Committee on Transport and Telecommunications of the Council of States (CTT-E) “unanimously decided“ to postpone its decision on motion 20.3237 ("Mobile telephony network. Create the general framework for a rapid deployment now") and others until next spring. In particular, they would like to know more about the procedures for measuring limit values of emissions. They also asked the Administration to complete the non-ionizing radiation monitoring report of June 2022 with regard to places where particularly vulnerable people are regularly present. The Committee believes that a decision in this sensitive area should be based on information that is as substantiated as possible.

As one advocate against increase of limit values says, “Despite an aggressive and manipulative communication campaign from the operators' lobby, the CTT-E was able to resist the pressure. We can thank all the opponents of 5G etc. who have provided a huge amount of information and all the journalists who have been willing to use at least part of this information”.

“This is only one step. With the support of all of you, the non-ionizing radiation protection associations and those against 5G etc. will be able to continue to work so that this step becomes a more definitive victory.”

While this article focuses on opposition from associations in French-speaking Switzerland, we must also thank those in other parts of Switzerland who equally supported this fight to bring about a more positive solution in favor of protecting the health of the population and the environment from exposure to non-ionizing radiation.

References (in German and French)