In Switzerland There is no Supervision for Mobile Phone Radiation

Activists have found that smartphone manufacturers are not being checked to ensure they comply with the limits. It's different in France, where the state takes rigorous action.
by Jon Mettler, Tages-Anzeiger, 12 Jan. 2023 - auto-translation
So far, the resistance of the mobile phone opponents in Switzerland has been directed primarily against mobile phone antennas, which they believe emit radiation that is harmful to health. But now critics are also turning their attention to non-ionizing radiation (NIR) emitted by cell phones themselves.

Investigations by the organization Phonegate Alert from France with the federal authorities have revealed: In this country there is no supervisory body that checks whether the manufacturers comply with the legal standards for mobile phone radiation. Rather, the manufacturers of mobile phones are themselves responsible for ensuring the security of their devices in Switzerland.

On December 22, 2022, the Federal Office of Communications responded to a request from Phonegate Alert that "according to the current status of legislation, there is no market surveillance authority in Switzerland that is responsible for the health aspects of NIS products". This includes not only smartphones, but also lamps for ultraviolet light and cosmetic lasers for home use.

The Federal Office confirmed the facts to the Tamedia editorial team.

Behind Phonegate Alert is Marc Arazi, a French doctor and entrepreneur. He calls on the Swiss authorities to remedy the shortcoming quickly. After it became public in 2015 that 9 out of 10 mobile phones used in France emitted more radiation than the manufacturers stated, Arazi founded his association.

In a nod to the Watergate scandal, the incident became known as "Phonegate" by our neighbor to the west. Since then, Phonegate Alert has been active throughout Europe against "the dangers of mobile phones and 5G", as the organization's website says.

Unlike in Switzerland, the National Frequency Agency (ANFR) in France checks whether mobile phones comply with the limit values ​​for radiation. The authority publishes the results on the Internet and has the power to impose sanctions.

In tests over the past eight years, the ANFR has come across 38 models that violated the requirements. Most recently, these included products from Samsung and Xiaomi. The manufacturers who were caught had to either issue software updates to reduce the radiation from the phones or take the devices in question off the French market.

During the tests, the French authorities adhere to the limit values ​​specified by the European Union. The so-called specific absorption rate, which is given in watts per kilogram, is measured. If the smartphone is held to the ear, a maximum limit of 2 watts per kilogram is permitted in France. The same requirement also applies to Switzerland – only this is not controlled in this country.

In addition, the French measure the radiation when the device is in a trouser pocket. The limit here is also 2 watts per kilogram. If the user carries the mobile phone in one hand at hip height, 4 watts per kilogram must not be exceeded.
There are more mobile phone subscriptions in Switzerland than inhabitants - Number of subscriptions in millions 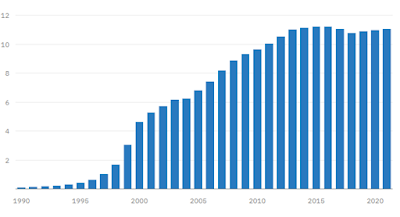 At the end of 2021, the permanent resident population was 8.7 million.
Graph source: Federal Statistical Office - Download data
It is quite possible that Swiss authorities will soon carry out similar test series. The Interior Ministry of SP head Alain Berset has received the order from the Federal Council to clarify the situation. As this editorial team knows, an interdepartmental working group has been set up under the leadership of the Federal Office of Public Health.

From the communications department of the new SVP Federal Councilor Albert Rösti, the Federal Office of Communications, the Federal Office of Energy and the Heavy Current Inspectorate are working together with the task force. It is their job to check who is responsible and to see to what extent controls for mobile phone radiation are necessary. The committee must also determine which human resources are required for this.

The Federal Office of Communications was unable to find out when the first results would be available. The task force is currently dealing with the question of who is responsible for supervision, according to one statement.

The Federal Council's order to the Interior Department was triggered by two political advances from 2019 and not the current revelations by Phonegate. At that time, the SP national councilors Silvia Semadeni and Martina Munz demanded clarity about the starting position in Switzerland in two interpellations. And they asked to what extent the State informs the population correctly about the risks of mobile phone radiation.

The Federal Office of Public Health writes in a fact sheet about the dangers: “Regarding the health effects of long-term exposure to high-frequency radiation from mobile phones, there are still uncertainties, and no short-term negative health effects are to be expected.”

In order to avoid unnecessary radiation exposure to the head, the federal agency recommends using headphones and a wireless hands-free device with a weak Bluetooth transmitter when making calls.

In Switzerland, mobile phone critics follow Phonegate Alert's activities with interest. One of them is Chantal Blanc, President of the Stop 5G Glâne association. Last summer, she publicly revealed that Federal Councilor Berset, as a private individual, had lodged an objection to a mobile phone system.

The French test results for mobile phones gave rise to fears that the limit values ​​for mobile phone antennas would also not be complied with, says Blanc. She wants to work with Phonegate Alert and set up a Swiss branch.
Jon Mettler has been business editor at Tamedia's central editorial office since 2018. He covers telecommunications, digitalisation, tourism and the watch industry.
More info@jonmettler
Original article in German:
https://www.tagesanzeiger.ch/in-der-schweiz-fehlt-eine-aufsicht-fuer-handystrahlung-133472296107
French translation of article by Phonegate Alert:
https://phonegatealert.org/project/suisse-pas-de-surveillance-pour-le-rayonnement-telephones-portables/
English translation also published by Phonegate Alert:
https://phonegatealert.org/en/project/switzerland-no-supervision-for-mobile-phone-radiation/
Several other media have also published articles on the same subject (list will be updated regularly):