Giving Your Child a Smartphone is Like Giving Them a Gram of Cocaine, Says Top Addiction Expert

Giving Your Child a Smartphone is Like Giving Them a Gram of Cocaine, Says Top Addiction Expert
ibtimes.co.uk, 24 September 2018 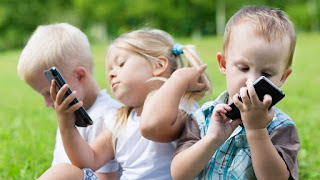 Top addiction expert is warning parents to avoid giving their children smartphones and tablets, as social media apps can be just as dangerously addictive as alcohol and drugs to children and teenagers.

According to most recent statistics from communications watchdog Ofcom, more than four out of 10 parents of 12-15 year olds find it difficult to control how much screen time their children get.

And frighteningly, experts say that sexting – the practice of sharing semi-naked, naked and sexual-themed images of themselves over the internet – is now becoming a norm for 13-year-olds.

“I always say to people, when you’re giving your kid a tablet or a phone, you’re really giving them a bottle of wine or a gram of coke,” Harley Street rehab clinic specialist Mandy Saligari told the Developing Teenager conference held on 6 June at Highgate Junior School in London, according to the Independent.

“Are you really going to leave them to knock the whole thing out on their own behind closed doors? Why do we pay so much less attention to those things than we do to drugs and alcohol when they work on the same brain impulses?”

Saligari, an expert in addiction, parenting and relationships, says that there has been a sharp rise in 16-20 year olds seeking treatment for addiction to digital technology – they currently make up two thirds of her patients, while the remaining third consists of 13-14 year old girls who routinely send naked pictures of themselves to people on their mobile devices and consider this to be completely normal behaviour.

Part of the reason for this trend comes from the fact that stressed out parents are likely to give their children tablets and smartphones to amuse themselves with, when in the previous generations, children would have been given toys or placed before the television.

According to Ofcom, this has led to three and four year olds in the UK typically consuming 6.5 hours of internet time on average per week.

The educational and psychological experts at the conference said that parents need to step up and make strict sleep times a priority for children and adolescents, and both parents and schools need to enforce set periods of time in the day whereby children cannot use mobile devices.