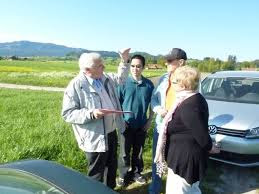 The 8th National Congress on Electrosmog, organized by the Swiss advocacy association Gigaherz, took place in Berne, the capital of Switzerland, on 30 April 2011. In attendance were 175 persons from Austria, Belgium, Germany, Liechtenstein, the Netherlands, and Switzerland. Participants comprised members of advocacy associations, health professionals and advocates, and persons who were suffering from various discomforts, they thought due to the proximity of antennas or devices emitting electromagnetic radiation. One such person was a school teacher who said she and some of her students were experiencing discomfort which they believed might be from electromagnetic radiation. A representative of the Swiss Federal Office for the Environment attended, however there was no one from the Swiss Federal Office for Public Health. One outcome of the congress was the decision to unite the various Swiss advocacy groups under one umbrella association, the Electromagnetic Federation of Switzerland and Liechtenstein (http://www.funkstrahlung.ch/).

Following are summaries of the presentations of the five speakers.

Professor Dominique Belpomme, Professor of Clinical Oncology, University Paris-Descartes. He practices medical Oncology and Environmental Medicine at the Alleray-Labrouste Clinic (Paris). He is also president of ARTAC (Association for Research and Treatment against Cancer) and Chairman of ISDE-France (International Society of Doctors for Environment).  http://www.artac.info/

Between May 2008 and March 2011, 488 persons who presented themselves to ARTAC reported hypersensitivity to electromagnetic fields (EMFs).  Over two years, 361 were examined in a clinical and biological setting. Eighty-five per cent of them clearly reported the repeated occurrence and disappearance of symptoms linked to the presence or absence of EMFs. Three clinical phases were distinguished: an initial stage during which EMF exposure can induce headaches, a sensation of heating in the ear and other parts of the body, especially the upper part of the body, tinnitus, ocular abnormalities, myalgia, and, in some cases, dermatitis and symptoms such as chest tightness, palpitations, tachycardia and nausea. A second phase is characterized by insomnia, chronic fatigue and depressive tendencies, attention deficit, troubles with concentration, immediate memory loss, behavioral problems, and anxiety, during which the initial symptoms may occur every time the patient is exposed to EMF sources.

In addition to the detection of brain vascular hypo-perfusion (decreased blood flow in certain areas of the brain), predominantly in the limbic area, blood tests revealed increased histamine levels in 36% of patients, an increase in heat shock proteins in 45%, a decreased level of melatonin in 33%, and vitamin D deficiency in 70% of patients.

Specific observations and tests were also included, proving that cerebral suffering was due to EMFs. There is a third phase, suggesting that an EMF intolerance syndrome may correspond to a pre-Alzheimer’s disease state. In a recent interview (September 2010), Pr Belpomme stated that “there is an important link between electromagnetic fields and neuro-degenerative diseases, notably Alzheimer’s. The risk of Alzheimer’s, which can arise in young persons from age 45, is moreover much more important than the risk of cancer.” Six epidemiologic studies have found a strong correlation between EMF exposure and Alzheimer's.  The therapy for treating persons suffering from EMFIS includes prescription of omega 3’s, anti-oxidants, vitamin D, and anti-histamines.


Professor Dr. Klaus Buchner was a university lecturer and professor in the Department of Mathematics at the Technical University in Munich until 2006. He has been National Chairman of the Ecological Democratic Party (ödp) Germany since 2003. www.dr-klaus-buchner.de

Effects of microwave radiation on protein folding and neurotransmitters

In a long-term study starting soon after the setting up of a GSM mobile base station which had been running for 18 months, the 60 participants showed significant activation of the stress hormones adrenalin and noradrenalin whose values increased in the first six months after the GSM transmitter was switched on. The values of the precursor dopamine decreased significantly after the start of irradiation. After the 18-month study period the initial state of the participants was still not restored. An indication of the chronic imbalance of stress management consisted of significantly decreased levels of phenylethylamine (PEA) by the end of the investigation period. A decrease in PEA levels is also found in persons with attention deficit disorder. These persons are often treated with Ritalin which has a structure similar to PEA.

Electrohypersensitivity: Is it physiological or psychological?

Dr. Havas enumerated the devices creating electrosmog which could cause health effects:

• cordless (DECT) phones (which radiate constantly up to 100 meters’ distance. ECO-DECT phones are less harmful)
• sleeping with cell phones under pillows
• starting cellphone use before age 20 and having used a cellphone for ten years or more
• compact fluorescent light bulbs (which contain mercury and emit UV radiation and dirty electricity)
• clock radios within reach of one’s bed
• using a computer “many” hours a day (radiation is emitted through the keyboard)
• iPod or Bluetooth
• wireless baby monitors (which emit radiation constantly. Voice-activated monitors radiate only when the voice is activated. These are not available in North America)
• wireless smart meters (plants within the smart meter beam have been seen to wither)
• living near high voltage transmission lines, in a multi-unit dwelling (upper floors have higher emissions), near cell phone and/or radio/TV antennas, a military base, airport, seaport, wind turbines.

Dr. Havas presented objective evidence documenting adverse biological reactions to radio frequencies in the form of poor power quality (“dirty electricity”) and microwave frequencies generated by wireless technology. There is evidence that electrosmog affects blood sugar among some diabetics. This has been called “type 3 diabetes” (environmentally mediated blood sugar changes). There is also evidence that electrosmog affects the heart resulting in arrhythmia and tachycardia. Individuals with neurological disorders, such as multiple sclerosis, are adversely affected by electrosmog in their home environment. In blinded studies, teacher health and student behavior improves if power quality is remediated in school buildings.

Dr. Havas stressed that one must treat the cause and not the symptoms by reducing exposure to electromagnetic radiation, enforcing the immune system and detoxifying the body (of mercury and other substances).

She referred to the 2002 Freiburg Appeal which suggests a link between certain health effects being noticed by doctors and mobile phone technology and includes suggestions for action: (For full text in French: http://www.robindestoits.org/l-Appel-de-Fribourg-Freiburg-09-10-2002_a66.html ).

• Informing the population and communes of their right to intervene during planning and erection of relay antennas
• Educating the population, especially cell phone users, about the health risks generated by electromagnetic rays and thus inciting conscious use; banning cell phone use by children and restricting use by adolescents
• Banning cell phone and wireless DECT phones in nurseries, schools, hospitals, retirement homes, meeting places, public buildings and public transport
• Developing scientific research that is independent of industry.


Carine Houssay, MSc, graduated in chemistry and public health and has been working at ARTAC since 2010. She is in charge of scientific research projects. Her own research focuses on the effect of electromagnetic fields on health. http://www.artac.info/

Between May 2008 and March 2010, 141 patients who reported suffering from electrosensitivity symptoms and who had been clinically diagnosed as having electromagnetic field intolerance syndrome (EMFIS) were subjected to a functional encephalo-exploration, using a pulsed echodoppler technique, the ultrasonographic cerebral tomospygmography (UCTS).

The UCTS is a method for determining cerebral pulsation by centimeter-thick sections. It uses a 2 MHz ultrasound wave emitted in the direction of cerebral structures. The reflected wave is captured by centimeter-thick sections and allows definition of a mean pulsatile index that is compared to normal subjects. This index varies according to four cerebral regions (cortico-subcortical, superficial sylvian, deep sylvian and vertebro-basilar).

Many pathologies can be detected by this unspecific but very sensitive technique. According to the clinical context and concerned territory, a hypo-pulsation will allow the early diagnosis of cerebral vascular accident, vertebra-basilar insufficiency, or neurodegenerative diseases, such as Alzheimer’s.

In the study, most of patients with EMFIS had a cerebral hypo-perfusion which predominates in the capsulo-thalamic and vertebra-basilar area, as well as in the limbic system.


Siegfried Zwerenz is chairman of the Bürgerwelle e.V. (“The Citizens' Wave”) - an umbrella organization of citizens and initiatives to protect against electro-smog. www.buergerwelle.de

Most of studies carried out so far have found it difficult to demonstrate the effects of electromagnetic fields (EMF) in short-term exposure of human subjects. This is often due to the design and implementation of studies where the physiological characteristics and needs of electro-hypersensitive (EHS) subjects are not sufficiently taken into account.

A research project of the Citizens' Wave breaks new ground; the trial site itself is the familiar surroundings of each subject. The experimental setting makes use of the fact that EHS individuals often have places in their homes where they feel affected by EMF exposure, and a protected place where they feel relatively free of symptoms. Using newly-designed equipment, the protected place is turned intermittently into a contaminated place for short periods during a test period of several days. The moment of EMF signal activation is determined randomly by computer (double-blinded). The crucial point is to change only one single parameter, that is, the exposure intensity. The subjects' own perception of changes in their condition together with records of medical monitoring devices are then compared with the data records of the electromagnetic exposure measurement.

Preliminary tests with sensitive subjects indicate that the new study design will allow collection of evidence for a causal relationship between EMF exposure and symptoms felt by highly sensitive persons. The evidence may serve in legal actions.

Most doctors do not understand the severity of the electromagnetic field intolerance syndrome. What can we do to raise awareness of this serious health problem? Unite advocacy associations and scientists and spread information about this issue, especially, educate doctors. Prof. Belpomme is one of the first persons to establish courses in environmental medicine at French universities, which includes diagnosis and treatment of EMFIS.

(Summaries by Meris Michaels.  Thank you to the organizers of the Congress, Gigaherz, for most of the content of these summaries.)
Publié par Anonymous à l'adresse 9:22 PM