The following two articles offer solutions to protect oneself against rays emitted by cell phones.  One is an anti-radiation device for cell phones, developed by a Swiss scientist, Jacques Surbeck.  The device was awarded a gold medal by the 85-member jury at the International Inventions Fair in Geneva in April 2011.   The other "protective solution" is a set of  ten rules for cell phone use published by the Vienna Medical Association. 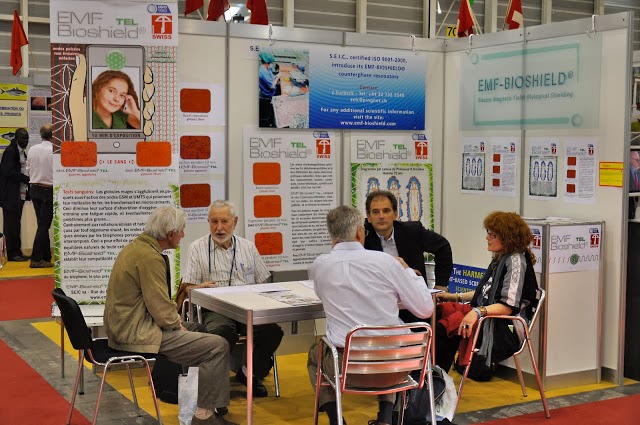 Mr. Jacques Surbeck, a Swiss scientist, is Director of Research at SEIC, a company which has developed devices to protect against the harmful effects of electromagnetic radiation for computer and television screens and cell phones.  The anti-radiation device (“chip”) for cell phones described here was awarded a gold medal by the 85-member jury at the 2011 International Inventions Fair in Geneva.  The Fair hosted 765 exhibitors from 45 countries, presenting inventions in such diverse fields as environmental protection, medicine, electronics and computer sciences, construction and civil engineering, security, transport, agriculture.


Mr. Surbeck has this to say about the anti-radiation device:

“For millennia, all living cells have been receiving LINEAR electromagnetic waves
(Solar radiation, cosmic, cosmo-telluric waves etc.) and they have adapted themselves well during the course of evolution.

“In recent years, manufacturers have created devices that generate and operate with electromagnetic PULSED or INTERRUPTED waves which correspond to a succession of flashes that living cells do not well tolerate.  (Try watching a steady light, and then place a fan in front of it which transforms the steady light into a succession of flashes .. it is difficult to bear ...)

“Armed with the results obtained, it took us three years of research and experiments to design, test, and validate, a ‘chip’ which linearizes  waves emitted by cell phones, making them BIO-COMPATIBLE  by eliminating biological harm to users.

“Human red blood cells contain molecules of iron.  These are polarized by pulsed electromagnetic radiation generated by cell phones, becoming micro-magnets, which naturally tend to stick to one another, and clump into bundles.  This reduces the surface area of red blood cells responsible for the transport of oxygen to organs, especially the brain, causing increased fatigue, and possible risk of thrombosis.
The internet site illustration  (http://www.emfbioshieldtel.com/eng/problem.html) shows red blood cells before and after a 10-minute cell phone conversation.  Without the protection of the chip, the red blood cells are stuck together.  With the protective chip, the cells are “free”, separated from one another.

“The ‘chip’ is composed of metal nanoparticles, metalloids, and rare earth elements,
embedded in a substrate, and duly "instructed" to allow them to enter
into resonance with the counter-phase of pulsed waves, and to fill the holes,
thereby linearizing these waves, and thus rendering them biocompatible.”

This "chip" called "EMF-Bioshield ® /TEL" is marketed on the internet) see site in English to order the "chip";   The text is a summary of what is described above.  The “chip” should be pasted to the back of the cell phone as close as possible to the antenna.   See also http://www.emfbioshield.com/arecrt.html.
Jacques Surbeck - 4 May 2011

For those of you who understand French, view this 2012 video of an interview with Mr. Surbeck and listen to this recent radio broadcast (Radio Medécine douce - 29 June 2011) with Mr. Surbeck.

10 Medical Rules for Cell Phone Use

This is posted on the site of the Electromagnetic Federation for Switzerland and Liechtenstein (http://www.funkstrahlung.ch/):
1.  In principle, phone as little and briefly as possible.  Young persons under 16 are advised not to use a cell phone at all.
2.  Never hold the cell phone against the ear when making a call.
3.  Never phone in a car, bus or train;  radiation is stronger.
4.  Generally, hold the cell phone the farthest possible from the body when sending an SMS.
5.  During conversation, keep within several meters' distance of other persons.  They also receive radiation.
6.  Never put the cell phone in a pants' pocket.  The radiation can have a harmful effect on male fertility.
7.  Always switch off the cell phone during the nighttime.  Never lay it next to the head.
8.  Don't play games on a cell phone.
9.  Head-sets are not inoffensive.  The wire acts as a conductor of radiation.
(Additional advice:  The best type of head-set to use is an "air-tube" hands-free headset, such as the Air2Hear, which reduces radiation exposure to the brain to almost zer0 by replacing the last six inches of wire with a hollow tube down.  Although an increasing number of people wear Bluetooth wireless headsets or standard wired earplugs, both still carry the risk of radiation, the former because it is itself a transmitter, and the latter because radiation can pass down the wire into the ear.)
10. Wireless LAN (Wi-Fi), that is, UMTS, provokes high-dose radiation.

(This information comes from the Medical Association of Vienna, Austria (www.aekwien.at)