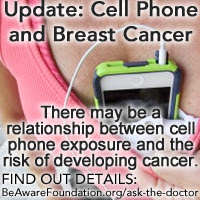 In the previous article on cell phone to breast contact and the risk of developing breast cancer, I described a 21 year old girl who started placing her cell phone in her bra at age 17. She stated that the phone was in contact with her breast for an average of 12 hours a day. She also stated that she sent more than 100 text messages a day. At age 21 she noted a lump in the center of her breast directly below where she stored her cell phone in her bra. An ultrasound of the breast was suspicious. An MRI showed multiple tumors distributed in roughly the area in which her cell phone was placed in contact with her breast. She required a mastectomy, chemotherapy and radiation, but is now doing very well.

Although these findings are of concern, there is no way to prove that exposure to the radiation emitted by the cell phones caused these cancers. There is, however, growing concern that there may be a relationship between cell phone exposure and the risk of developing cancer. For example, the International Agency for Research on Cancer (IARC) concluded in 2011 that radio frequency fields (RF), such as those from cell phones, may cause cancer but more research is needed before this can be confirmed. In July 2012 the Government Accountability Office (GAO) noted that the Federal Communications Commission (FCC) energy exposure limits may not reflect the latest research.2 The report also notes that current measures do not address the issue of direct contact with the skin, and warn that prolonged skin contact could result in RF energy exposure higher than the FCC limit.

Although safety data on skin contact with cell phones is lacking, cell phone manuals recommend that skin contact with cell phones be avoided. For example, the iPhone 4 Product Information Guide states that when carrying the iPhone, keep it 1.5 cm (5/8 inch) or more away from your body to ensure exposure levels remain at or below the maximum levels. The user manual for the BlackBerry 9620 Smartphone states that…. “when you wear the BlackBerry device close to your body, use a RIM approved holster with an integrated belt clip or maintain distance of 0.98 in. (25 mm) between your BlackBerry device and your body while the BlackBerry device is transmitting.” The manual also states that the long-term effects of exceeding RF exposure standards might present a risk of serious harm.

Hopefully the FCC will address this issue in the near future, but until more becomes available, skin contact with cell phones must be avoided. This may be particularly true for young women with developing breasts. Previous studies have clearly demonstrated that higher frequency radiation, as occurs with diagnostic x-rays (for example chest X-rays), is a proven risk factor for developing breast cancers. It took decades to prove that exposing young women to chest X-rays increased their risk of developing breast cancer. If a similar risk exists for placing cell phones in contact with the breast, the number of women at risk could be enormous. There are more than 6 billion cell phones currently in use, and the number of users is growing rapidly. It is unknown how many women place their cell phone in their bras, but according to one of our patients, all of her friends were placing their cell phones in their bras before she was diagnosed with breast cancer. Until more data becomes available, efforts should be made to encourage the public to follow the guidelines of the cell phone manufacturers and avoid any form of skin contact.

If you have questions or comments, you can contact me at: Ask The Doctor or Contact Us.