Switzerland: Teachers Vote to Keep Wi-Fi Out of School

This recently published article in a La Chaux-de-Fonds newspaper (canton Neuchâtel) is revealing regarding wi-fi in schools in the canton, the opinion of a doctor and geneticist at Geneva’s university hospital, and the current recommendations of the Swiss Federal Office for Public Health.

Teachers Are Out to Get Wi-Fi
by Sylvia Freda, L’Impartial, 27 juin 2013 (translated from French by the Editor of this blog)

At the Blaise-Cendrars High School, wi-fi is not taken for granted

Teachers at the Blaise-Cendrars High School in La Chaux-de-Fonds, have all recently decided that there will be no wi-fi, neither in the cafeteria nor in classrooms as a precautionary approach to everyone’s health. “In the beginning, we had selected installation of a wireless network for the sake of educational convenience”, explains Patrick Herrmann, Director of the establishment. “We wanted to allow teachers and students to work on tablets and other computers in the cafeteria and in classrooms. The work had already begun.”

What is there to be afraid of?

It was seeing an installer working on the site that a certain number of teachers reacted and asked for the opening of a discussion on the subject of reverting to wi-fi. “There was an impassioned debate between partisans and opponents. We proposed that each side prepare arguments.” After these were distributed before the teachers’ meeting, the latter were called to vote their preference. “The adversaries of wi-fi were in the majority. Worth mentioning is that there was a large number of abstentions.”

On what basis did the opposition develop their anti-wi-fi argument? “On certain scientific research as well as policy developments,” replies Patrick Hermann. “To be brief, at the scientific level, apparently, waves from wi-fi are of the micro-wave type. And even if their intensity is relatively low, their impact is significant. Waves penetrate several centimeters into the human body.”

He adds that the International Agency for Research on Cancer (IARC) of WHO has classified electromagnetic radiofrequency fields as possibly carcinogenic for humans, on the basis of an increased risk of glioma, a type of malignant brain cancer, associated with use of mobile phones.

« Last May 30th, the Council of Europe recommended banning wi-fi and mobile phones in schools. The National Library of France has renounced a wireless network. In France, the National Assembly has voted a text asking that wi-fi be used as little as possible in schools”, says the Director of the Blaise-Cendrars High School.

It should be recalled that in 2001, a credit of 11.9 million was voted by the Grand Conseil for the development of information technology in schools. In the canton of Neuchâtel, a decree from November 2010 calls for the installation of wired connections rather than wi-fi in secondary schools. “Wi-fi is an exception”, Jean-Luc Abbet, Chief of Information Technology, Neuchâtel, informed “L’Express” and “L’Impartial” at that time This was because “we do not know the impact of electromagnetic waves”, specified, with caution, Jean-Claude Marguet, Chief of the service for compulsory education.

Wiring is not straightforward

« At the Blaise-Cendrars High School, we tried to work essentially with wires », explains Patrick Herrmann. “The problem is that the building, with its big concrete slabs, makes it complicated to install wiring everywhere. And many tablets no longer offer the possibility to be connected with a wire!” Finally, there will be some wi-fi in the building, only in certain, well-defined places.

It’s coming from the Web!

On the Internet, one finds many studies on the risks of wi-fi waves. There is notably the Danish students’ study of cress exposed to wireless network waves (see below). On the Web, the association Parler-Partout (www.parler-partout.ch) suggests, among other things, neighbors to switch off their wi-fi when they are not using it, for the well-being of everyone. Located in La Chaux-de-Fonds, its president, watchmaker and geobiologist Roman Winiger, is concerned about the quality of places. “Wi-fi waves weaken us, distract us. Their influence differs according to the individual.”

He has seen the calamitous effect of wi-fi waves and mobile phones, at a winegrower whose second wine fermentation was slow and on certain persons experiencing sleep disturbances or lack of well-being during the daytime. “The effects of electrosmog on health can equally be observed in pets or in farm animals, particularly cows.”

At the Centre interrégional de formation des Montagnes neuchâteloises (Cifom), access to wi-fi is possible in each unit by means of identification. “We are after all in the 21st century! That being said, antennas are not in every corner”, notes Jean-Pierre Brugger, Director-General. “They have been set up according to the needs of different schools and on the basis of the precautionary principle for health.”

At the Centre professionnel du littoral neuchâtelois (CPLN), « installation of wi-fi has not met with the same resistance as at the Blaise-Cendrars High School in La Chaux-de-Fonds », comments Matthieu Frochaux, Secretary-General. “The terminals at the various CPLN schools have been installed according to specific requests, always with the precautionary principle regarding health in mind, which means that it is in general installed at least 10 meters from students!”

At the Denis de Rougemont High School, « neither teachers nor students are afraid that wi-fi will harm their health », declares Bernard Walder, Deputy Director. “The radiation involved is much lower than that of mobile phones, which everyone places two centimeters from their ears. Moreover, our wi-fi terminals are placed up high.” For several years, wi-fi has already been operating in the physics lab. “Now, we have it in the cafeteria, the library and the classrooms. We have requests for the installation of more wireless network terminals. But we are basing this on the decree of November 2010 and there, we are limiting the tendency.”

At the Jean Piaget High School, a wi-fi terminal is located in each classroom. “And we have not had negative opinions regarding their placement!” says Claude Meyer, the person responsible for information technology in the establishment.

Disturbing, the wi-fi cress : all brownish… 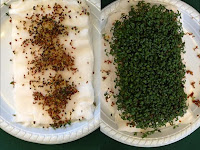 Last May, there was a new buzz on the social networks during the same time that discussions about wi-fi started at the Blais-Cendrars High School. The information which created such a stir on Facebook and Twitter? Several Danish students reported the results of an experiment after having exposed cress seeds for 12 days to wi-fi waves, and others, placed away from all exposure. Result: those exposed to wi-fi waves were burnt (photo), those protected, remained healthily green. In fact, those which appeared brownish had not germinated and even suffered mutations.

During a broadcast on La Première, Suisse romande radio/TV, Ariane Giacobino, doctor and geneticist at the Geneva University Hospital (HUG) recently revealed that the Danish experiment is not a scientific study, but one of general interest. “It has the merit of showing that we must not delay too long in evaluating the health risks linked to wi-fi.”

After having resumed studies conducted on the subject over the last two years, she has not found anything significant, only studies on masculine fertility and reproduction problems. “These show the absence of harmful effects on the reproductive system as well as on the development of the fetus and immune system.”

All experiments in question were conducted on animals exposed to wi-fi for a certain number of hours per day. Dr. Arian Giacobino has, nevertheless, found other studies conducted on the sperm of fertile men. Placed directly in contact with computers connected with wi-fi, the sperm shows a decrease in motility and increase in DNA fragmentation. Another study appearing in a journal of pediatric urology, has also caught the attention of Dr. Giacobino. During a period of 20 weeks, rats were exposed, 4 hours a day, to radiofrequencies comparable to the wi-fi one has at home. “The testicular tissue was analyzed. Lesions in the DNA were identified as well as modifications in the functioning of certain cellular enzymes. This is what I found most disturbing, which leads me to think that the impact of wi-fi waves on health is a subject which we should be paying attention to.”

What does the Confederation say?

“For the Federal Office of Public Health (OFSP), the local wireless network presents no health risk according to existing knowledge. The OFSP has conducted tests”, signals Catherine Cossy, spokesperson. Even in the case of exposure quite close to the body, when a laptop connected to wi-fi is for example placed on the lap, the radiation is still below limit values. Moreover, the radiation decreases very rapidly with distance. At 20 centimeters’ distance, one is at 10% of the limit value.

What is the limit value? The local wireless networks are subject to the ordinance on telecommunications installations. The limit values are fixed for power and maximum radiation. These norms, the same as in all of Europe, are in line with the recommendations of the International Commission on Non-Ionizing Radiation Protection.

If Catherine Cossy says wi-fi carries no risks, the internet site of the OFSP all the same indicates that we do not yet know whether electromagnetic fields generated by the wi-fi network present a danger for health. Moreover, a series of simple rules informs us about its use, such as: switch off the wireless network if you are not using it, or avoid working with a laptop on your lap, if you are connected. “If possible, it is better to install the fixed point one meter from one’s work-site and places where people permanently spend a lot of time.”