Cell Phones and Acoustic Neuroma: Comments on May 2013 Study from the United Kingdom 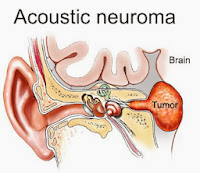 Read the following two articles on the May 2013 U.K. study linking long-term use of mobile phones and elevated risk of acoustic neuroma.

The research group at the University of Oxford that reported a link between long-term use of a mobile phone and an elevated risk of acoustic neuroma (AN) in May now says that it is no longer there. In a short letter to the International Journal of Epidemiology (IJE), the Oxford team advises that when the analysis was repeated with data from 2009-2011, "there is no longer a significant association." Also gone, the team writes, is the "significant trend in risk with duration of use."

After ten or more years of phone use, the risk of AN is now only 17% higher with a confidence interval (0.60-2.27) that indicates the small increase is not significant. In their earlier paper, the Oxford group reported that the AN tumor risk more than doubled after ten years and was statistically significant (RR = 2.46, CI = 1.07–5.64).

The update comes in response to a letter from Frank de Vocht of the U.K.'s University of Manchester expressing surprise that the Oxford team had not included the finding of the AN risk in its original published abstract —especially given that it "provides further support" for the IARC decision to classify RF radiation as a possible human carcinogen.

In his letter to IJE, de Vocht includes the results of an informal meta-analysis he carried out on studies of long-term use of mobile phones and the incidence of AN:

“As shown, the accumulated scientific evidence remains inconclusive, but does indicate a 14 - 43% summary increased risk of acoustic neuroma because of long-term (10+ years) use of mobile phones, although without reaching statistical significance (95% CI = 0.76–2.67).”

It is too soon to know how the latest data from the Oxford study would affect de Vocht's meta-analysis.

This may be an underestimate. de Vocht did not take into account a Japanese study which showed that those who used cell phones for more than 20 minutes a day for at least five years had three times more acoustic neuromas than expected. (See our report.) The Japanese results are not presented in the same way as those in the other studies and may not be easily integrated.


Cell Phone Use, Acoustic Neuroma and Cancer of the Pituitary Gland

Cell phone use was associated with increased risk of two types of brain tumors in a new study of 790,000 women.

PRLog (Press Release) - May 10, 2013 - BERKELEY, Calif. -- Cell phone use was associated with increased risk of acoustic neuroma and cancer of the pituitary gland in a prospective study of more than 790,000 women in the United Kingdom. (1)

Acoustic neuroma is a rare, non-malignant tumor that develops on the main nerve leading from the inner ear to the brain. The pituitary gland is an organ that produces hormones which regulate important functions of the body and is located in the middle of the base of the brain.

The results for acoustic neuroma re-affirm one of the two major conclusions by the World Health Organization (WHO) in its recent monograph about radiofrequency electromagnetic fields and form the basis for classification of cell phone radiation as "possibly carcinogenic" to humans:

“Positive associations have been observed between exposure to radiofrequency radiation from wireless phones and glioma, and acoustic neuroma.” (p. 421) (2)

The risk of cancer of the pituitary gland more was more than twice as high among women who used a cell phone for less than five years as compared to never users. Although the risk was elevated for women who used a cell phone for ten or more years (about 60% greater than never users), this effect was not significant. Since this may be the first study to find an association between cell phone use and pituitary cancer, further research on this cancer is necessary.

The women reported their cell phone use in 2005 to 2009 and again in 2009 and were followed through 2011 to see whether they developed tumors. The analyses controlled for other factors associated with tumor risk.

Since brain tumors can take decades to develop, the study underestimates the long term risk due to cell phone use as the average follow-up period for cell phone users was only seven years. Few women (about 8%) in this study used cell phones for ten or more years. Moreover, the women in this study may have used their cell phones much less than women do today.

The study was published online in the International Journal of Epidemiology on May 8, 2013. The authors are affiliated with the University of Oxford and the World Health Organization’s International Agency for Research on Cancer.