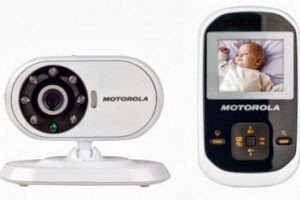 Comment from Santa Fe doctors on this product: “This is a horrendous case of untested products run amok, not unlike the marketing of Thalidomide…another case of companies making money off the ignorance of the US public on the dangers of microwave radiation–especially to children whose brains are more vulnerable.”  Read the comments following the product description.

View this video which demonstrates the aggressive sound of harmful pulsed microwave radiation emitted from a digital baby monitor such as this one : right into your baby's brain and body.

What it is: You could be almost a full city block away from your baby’s nursery and still receive clear audio and video with this monitor, even through floors, ceilings, and doors. There are lots of ways to customize your view, and the controls are intuitive and easy to use: You can choose to turn off the video or the audio, tilt the camera left or right, or zoom in for a closer look.

The receiver is sturdy but still lightweight. A kickstand helps it stand on any flat surface. Day or night, you can count on this monitor, since built-in light sensors automatically send the camera into black-and-white night-vision mode in a darkened room.

What to watch out for: Watch where you place the receiver, because you may notice interference if it’s too close to a computer, smartphone, television, or microwave oven. The camera has to be plugged in – there’s no battery option. Parents complain about the annoying beep you hear if the receiver goes out of video or audio range and the fact that there’s no way to clip it to your belt or waistband to roam about hands-free.
Cost: $130-$180

How do people not realize this means something like electricity is also hurtling through soft wee baby’s body? Do people really think that the electricity-like stuff stabs through floors, ceilings, and doors, but when it gets near baby’s body it puts the brakes on and tiptoes around him/her?
SANTA FE DOCTORS W.A.R.N. says:

This is a horrendous case of untested products run amok, not unlike the marketing of Thalidomide. In 2011 the World Health Organization categorized baby monitors as Class 2B: possible human carcinogens with DDT, lead and HIV. New research shows forming fetal brain cells are displaced with exposure to ultrasound and connected to autism and other brain damage in infants.

These are another case of companies making money off the ignorance of the US public on the dangers of microwave radiation–especially to children whose brains are more vulnerable.

This exposure is added to multiple exposures in a child’s life, including WiFi which 45,000 Los Angeles teachers, 76,000 Ontario teachers, and the Council of Europe recommended banning wi-fi and mobile phones in schools. The National Library of France has renounced a wireless network. In France, the National Assembly has voted a text asking that wi-fi be used as little as possible in schools”, says the Director of the Blaise-Cendrars High School.

Well-meaning parents also expose their children to their own cellphone emissions, WiFi, computers and routers. Many times a child being unable to sleep or to calm is addressed by moving the child’s bed from a router or Smart Meter being on the other side of a wall. If microwave radiation can pass through walls, how can you think it does not enter your baby’s brain?

“You could be almost a full city block away from your baby’s nursery and still receive clear audio and video with this monitor, even through floors, ceilings, and doors.”

They don’t mention that it also sends this strong signal comprised of microwave radiation, that’s a 2B carcinogen, right through your baby!!!

And do people go down the block and leave their baby at home these days???

There are baby monitors out there that don’t use wireless. People are getting sick all over the world from wireless exposures. Please look into this and find an appropriate way to monitor your child.

Just so you know, the frequency band that these baby monitors work within is the same band as radar. Think about that the next time put the monitor in your baby’s room.