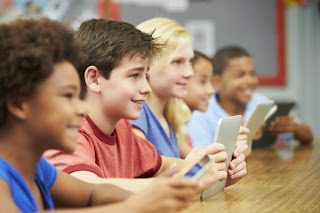 by Hannes von Wyl, 20min.ch, 21 November 2013  (Translated from German by Google and the Editor of this blog)

From 2015, elementary school students will already be working with mobile phones and tablets - over WLAN (Wi-Fi)  connected to the Internet. Critics warn of health problems and even leukemia and tumors.

(Photo: Tablets and mobile phones in the classroom: from 2015/16 this should be the standard. Because the devices can only be connected wirelessly to the Internet, the schools will be equipped with Wi-Fi. According to critics, irradiation from the radio waves results in lack of concentration and more cases of ADHD and cancer.)

According to Curriculum 21, which should be implemented in all German-speaking schools in Switzerland from the school year 2015/2016, children will learn how to use new media technologies in kindergarten and in primary school. Due to the proliferation of tablets and smartphones, not only computers and notebooks, but also "small mobile devices", will be taken into account.

This is being followed with interest by the group IG Livelihoods [IG Lebensgrundlagen] because tablets, smartphones and netbooks are usually connected wirelessly via WLAN to the Internet. "In Canadian schools, headaches, cardiac arrhythmias, learning and concentration difficulties, and weakness in speech have been observed," said IG-member Kurt Rohrer of the "Basler Zeitung" . It therefore asks that children be protected from the radiation of wireless networks. "We have nothing against computers in the school. But please, with a cable rather than a wireless connection."

Hans-U. Jacob, President of the Swiss organization on electrosmog [www.gigaherz.ch], is also disturbed by the wireless upgrade in schools. The intensity of radiation from wireless transmitters is similar to a mobile phone mast at 70 meters’ distance. "Children are also more sensitive to high-frequency radio radiation than adults." Short-term radiation exposure leads to nervousness and difficulty concentrating, and in the long term, even increased numbers of cases of leukemia and brain tumors have been found, says Jacob.

This is contradicted by the Federal Office for the Environment (FOEN), which has investigated this in a report on the radiation exposure of the population by mobile phone masts. This is low; health risks were not found. Regarding the implementation of Curriculum 21, the federal report says it is the responsibility of the cantonal education departments: "when assessing the health aspect, we recommend that the cantons follow the judgment of the FOEN," says Markus Willi, head of the Swiss Institute for Information Technologies in Education.

The discussion about the possible adverse health effects of radiation exposure of students was important and needed to take place, according to Willi. However, a future school without Wi-Fi is inconceivable: "Curriculum 21 provides learning skills in dealing with different mobile devices, many of which are exclusively connected to the Internet by wireless LAN."

WLAN is not always turned on

IG Livelihoods believes it is just difficult for Willi to realize nationwide cable connections for contemporary teaching scenarios. "Wireless networks do not need to run for 24 hours, but are only turned on when they are necessary for teaching."

That approach is followed, for example, in the Canton of Basel-City, as Mark Baumler, Co-Head of the ICT Media Division of the Department of Education, said: "A wireless connection is activated through access points in the classrooms only when teachers or students need mobile access to the Internet.” This enables a space-independent Internet usage and leads to a lower radiation burden on students and teachers.