The Secret Killer: Wireless Pollution Is Out of Control 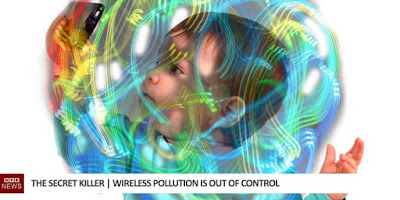 The Secret Killer | Wireless Pollution Is Out Of Control
oye.news, 27 October 2016

Over the past 20 years, we have seen wireless technology develop very rapidly and it’s usage is now as commonplace as electricity and free running water. Most households now use wireless technology for their Laptops, Televisions, iPod’s, Games Consoles, Smart Meters, and even kitchen appliances are beginning to be launched with wireless technology as part of the ‘smart grid’.

Wifi hotspots are now in most cities and most schools use wireless technology now. So we are living in a sea of invisible frequencies and there is no negative effect on life, right?

Well not according to the late geneticist Dr Mae-Wan Ho:

To be “wireless” has replaced “wired-up” for being connected and cool. Wi-fi is now in hotels, airport departure lounges, universities, schools, homes, and entire cities. You cannot get away from it. We shall all be submerged in a sea of microwaves, whether we choose to go wireless or not. Soon, all one can do is to lock oneself away in a shielded room, an electro-smog-proof yellow submarine.

And for the estimated 1.5 – 3 percent of populations worldwide that are “electromagnetic hypersensitive” , that may well be the only option open. Unlike cigarette smoke, passive involuntary exposure to electromagnetic radiation cannot be avoided easily.

There is no restrictions in place, no adequate monitoring of the levels of microwave radiation being emitted – it is simply out of control:

‘There are now more than 250 000 public hotspots for wi-fi worldwide . Wi-fi is available in millions of homes, corporations, and university campuses. According to one estimate, wi-fi use has increased 74 percent in Europe and 75 percent in the UK between the first and second half of 2006 .

Birmingham is to have Britain’s first city wide wireless communication by early 2007, and Manchester is planning the largest European wi-fi zone covering 400 square miles. Norwich and Milton Keynes already have wi-fi, and Brighton is set to follow [4]. Most worrying of all, wi-fi has been installed in up to 80 percent of secondary schools in the UK and more than half of the primary schools , exposing the most vulnerable populations to microwave irradiation.’

Meanwhile, the World gets ready for the latest in microwave radiation equipment with the new 5G:

The worldwide rush to 5G wireless rollouts is set to raise our pulsing pollution to new levels. Untested, high microwave frequencies are being lined up to increase bandwidth, automation, and usage. – Lynne Wycherley