Infantalizing Robots for the Elderly 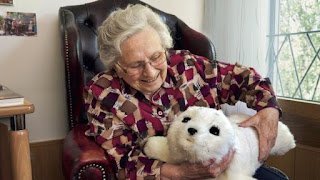 Not only children may be adversely affected by interactive robots but also the elderly...

Certain EMS [homes for the elderly] in the canton have acquired or are planning to acquire, a roboticized baby seal named Paro costing 5,000 francs ($4,900).  This baby seal, which responds to caresses and can also show dissatisfaction would stimulate interactions of persons who have dementia, awakening their emotions and easing their anxiety...

But no, persons with dementia do not fall back into childhood!  Even with significant cognitive disorders, they maintain an identity, awareness of their environment, and dignity.  On the other hand, their life in an EMS is most often characterized by sensory deprivation, boredom, inactivity, and solitude.

The response to this malaise does not lie in an infantalizing robot.  It is a matter of changing the culture of  EMS, freeing them of practices focusing on the dispensing of medications, safety, permanent surveillance, uniformity, and bureaucratic instructions.  It involves the creation of living spaces that are more like family environments, open to the city and which allow close contact with nature and animals (real ones!) and intergenerational relationships.

In this context, yes to technologies if they allow creation of interpersonal ties and if they respect one's dignity, if they contribute to well-being and quality of life, while taking into account one's individual needs and desires.