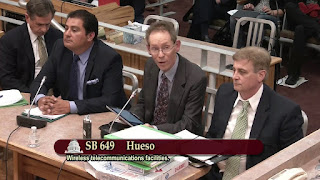 SB.649 would dramatically increase exposures to pulsed, Radio-Frequency Microwave Radiation (‘RF/MW radiation’) in California neighborhoods. Over 110 California Cities entered their formal opposition to SB.649 into the public record before the Senate vote.

05/31/17 SB.649: Read third time. Passed. (Ayes 32. Noes 1.) Ordered to the Assembly. Senator Glazer was the sole No vote. The following Senators did not vote: Allen, Beall, Jackson, Monning, Newman, Portantino and Wiecowkski. The bill now passes to the California Assembly for consideration.

Sacramento, CA, June 1, 2017 — At the tail-end of a 12-hour Senate session (View 5/31/17 Senate Floor Session from 8:31:52 to the end), the California Senate passed SB.649, a highly contentious Bill that would allow deployment of powerful two-way microwave transmitters on virtually every streetlight, utility pole and other non-pole structure in the public right of way throughout California neighborhoods. The microwave transmitters would be deployed as close as 10-15 feet from second-story windows and would forcibly expose the inhabitants to a never-ending stream of RF/MW radiation — 24/7/365, with no respite — and in doing so, the bill would violate the Federal Americans with Disabilities Act. State legislation cannot legally force 1.2+ million Californians out of their homes. These Californians are protected by Federal laws. SB.649 is destined to pit California cities and counties against the State. This ill-considered legislation is destined for court, just as in the State of Ohio: 80+ cities in Ohio are suing the State of Ohio over a very similar State bill.

These full-power microwave transmitters are being called small cells by the Wireless Carriers to make them sound innocuous, but the planning department documents for 19 Verizon 4G small cells, deployed in downtown Palo Alto in 2016, state that the input power for each small cell antenna is 300 to 500 Watts. Similar documents for a 2017 Verizon 4G Small Cell deployment in Weston, MAstate that each antenna outputs 1,257 Watts of Effective Radiated Power (ERP), a significant RF/MW radiation exposure.

Now consider that each of these small cells is powered by associated equipment that is housed in a separate refrigerator-size metal box; these boxes set right on the sidewalk. This dense infrastructure, that is set to invade our neighborhoods, raises three common-sense questions:
How much power do these small cells consume 24/7/365? Answer: a lot. In a state with aggressive green energy goals, this unecesssary planned deployment would add loads of greenhouse gasses to the atmosphere.

What is the maximum level of RF/MW radiation that these antennas can output? Answer: a lot more than is needed to make calls or texts.

Do we actually need to deploy any additional antennas or burn any additional power to spray electricity through the air like this, since 98% of Americans, including Californians can already make calls and texts? Answer: No — 3/2/17 Senate Hearing on Wireless Technology testimony: 97.9 percent of Americans can choose from three network base operators and 93.4 percent can choose from four operators.

These three critical questions, inexplicably, were not considered by any of the CA Senate Committees that conducted hearings on SB.649 or in the Bill analyses, written about SB.649:
Energy Utilities and Communications Committee, Chaired by Senator Ben Heuso (Hueso is also the author of SB.649 as explained well here). Read/view Committee testimony on SB.649 here.
Governance and Finance Committee, Chaired by Senator Mike McGuire (who has conducted closed-door negotiations with Wireless Carriers and in a subcommittee that he formed on 4/26/17 with Senators Hueso and Lara) Read/view Committee testimony on SB.649 here.
Appropriations Committee, Chaired by Senator Ricardo Lara (When Lara decided to vote SB.649 to the Senate floor, he ignored the well-documented due process violations of SB.649 by the Governance and Finance Committee, detailed in letters to Lara from Attorney Harry Lehmann on 5/12/17 and 5/23/17). Read/view Committee testimony on SB.649 here.

Deployment of Small Cells is Unconstitutional

Unbelievably, SB.649 contains NO on-going monitoring of RF/MW radiation exposures from these so-called Small Cells, even though his Bill would allow Small Cells to be installed in the public right of way in virtually all CA residential neighborhoods. This represents an insurmountable problem because even though SB.649 states that it must have compliance with the federal Americans with Disabilities Act of 1990 (42 U.S.C. Sec. 12101 et seq.), such compliance is not possible because deployment of small cells creates an illegal access barrier for over 1.2 million Californians.

Electromagnetic Sensitivity (EMS) is recognized by the U.S. Access Board and is a protected disabled characteristic that affected 3% of Californians in 1998 and affects even more Californians today. Small cells deployed in residential zones would create an access barrier for the EMS-disabled to their homes and communities. Article I, Section 1 of the California constitution states “All people are by nature free and independent and have inalienable rights. Among these are enjoying and defending life and liberty, acquiring, possessing, and protecting property, and pursuing and obtaining safety, happiness, and privacy.” Small cells would violate inalienable rights to safety and privacy and are, therefore, unconstitutional.

In addition to violating the ADA, also violates the Federal Fair Housing Act. The high-frequency antennas will make most public places, residential housing and federal housing inaccessible for a large and growing percentage of the population who are already injured from excessive exposure to electromagnetic fields.

SB.649’s current language does not regulate off-pole associated equipment — which is what is deployed in 99% of all small cell installations. We highlighted this significant error to the Senators prior to the 5/15/17 Hearing of SB.649 in front of the Senate Appropriations Committee, but the error was not corrected.

The original language in the bill that limited the size of this associated equipment was stripped from the version that the Senators voted through on 5/31/17. Instead, a poorly written loophole was inserted into the bill on 5/2/17 that results in no effective regulation of the associated equipment cabinets or their contents, which can be computers, batteries that leak toxic chemicals and noisy fans:

In addition, due to arcane Federal definitions, existing small cell installations once they are in are called co-location facilities and are, therefore, allowed to grow in horizontal and vertical dimension year after year — without local input or control.

The 19 small cell antennas in Palo Alto are deployed just 20 feet high (versus 200 feet high for traditional macro cell phone towers). Vertical RF/MW radiation lobes, typical for microwave transmitters, extend both above and below the antenna. The downward RF/MW radiation lobe actually reaches the sidewalk in Palo Alto. This explains why the peak levels of RF/MW radiation metered under these antennas on 4/21/17 registered three to five times higher than the RF/MW radiation levels for weapons that the Soviet Union beamed at the U.S. Embassy in Moscow from 1953 to 1978: these RF/MW exposures caused the deaths of three US ambassadors to Russia by brain tumors and caused other cancers, miscarriages, cataracts, immune system damages, sleep disturbances and more among US embassy personnel.

Dr. Neil Cherry reported in 2000 about the US Government data collected on the health of the Moscow US Embassy personnel:

A highly remarkable result is the dose-response relationship for a range of sicknesses. Despite the small numbers, the lack of long latency period and dilutionary factors, the Lilienfeld data shows significant increases in:

Tens of thousands of Substantial scientific studies from the 1950’s to the present plus 100+ substantial scientific studies entered into the CA Senate pubic record on 7/15/15 and on 4/4/17, which were further discussed at the 4/26/17 CA Senate Governance and Finance Committee, provides the data that bolsters the common-sense conclusion that deploying 4G/5G small cell antennas in residential zones in CA will be a health disaster.

On 4/4/17, the results from the NIEHS National Toxicology Program’s $25 million, 16-year study of the carcinogenesis of cell phone radiation was entered into the CA Senate public record. The NTP study reported in 2016 that RF/MW cell phone radiation exposures at levels far below that which would cause tissue heating causes brain cancer, heart cancer and DNA damage.