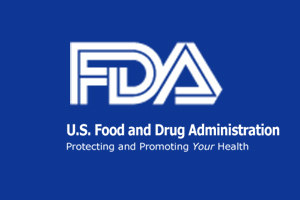 As part of its ongoing support for the health and industrial scandal of Phonegate, the American organization, Environmental Health Trust (EHTrust), chaired by Dr. Devra Davis, wished to engage the Food and Drug Administration (FDA) on the subject of the tests conducted on the Specific Absorption Rate (SAR) by the French National Frequencies Agency (ANFR) between 2012 and 2015 on the real use (in contact with the body) of several hundred mobile phones. Full measurements were published for the first time by the French National Agency for Food, Environmental and Occupational Health and Safety (ANSES) in a July 8, 2016 report, “Exposure to Radiofrequencies and Child Health”.

The Executive Director of the Environmental Health Trust (EHT), Theodora Scarato, wrote to the FDA in June and September 2017 to inform them of the results of these tests and of my action as whistleblower for a better protection of the health of mobile phone users, thanks to a much stricter regulation that does not allow manufacturers to place on world markets mobile phones potentially at risk. 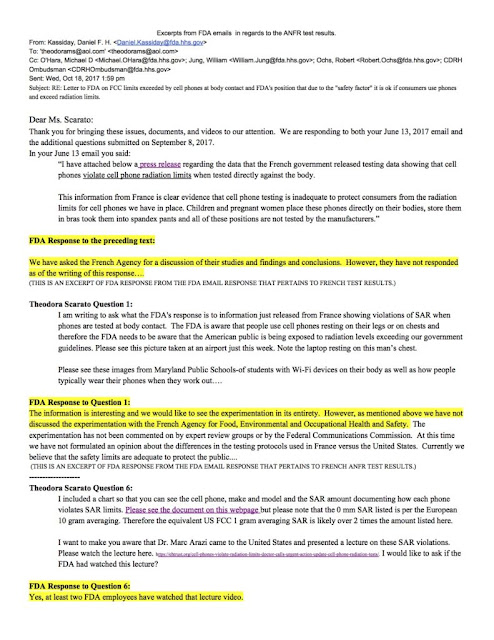 On October 18, 2017, the FDA replied to the EHTrust by an Email from Daniel Kassiday, Radiation Safety Engineer, to let it know that the FDA had written to the French agency, asking for a discussion of the results of their studies and conclusions and that ANFR has not responded to date (as of October 18). The FDA also indicated that it has not yet formed an opinion with regard to the differences in test protocols between France and the United States, nevertheless hastening to recall that the safety thresholds for health are adequate to protect the public.  Finally, the FDA confirmed to the EHTrust that two of its employees viewed the video of my intervention during the scientific conference in Jackson Hole (USA) on July 31, 2017.


The exchanges with the FDA, ANFR and ANSES are very important. The SAR test protocols in the United States are still currently conducted at 15 mm from the skin, while in June 2016, France and Europe changed the European standard to 0 mm (SAR limbs) and a few mm (SAR trunk), following the disclosure of its measurement tests indicating that the limit values were exceeded by up to more than 3 times for 9 out of 10 mobile phones in 2015.

In the same way as France and Europe, they will no longer be able to ignore the protocol of the Federal Communications Commission (FCC), the American counterpart of ANFR, which since 1996 has introduced stricter parameters to protect the health of users, for example, by using a SAR measurement of 1 gram of tissue instead of 10 grams and 30 minutes of communication instead of 6. In addition, the regulatory thresholds are lower for the head and trunk at 1.6 W/kg compared to 2 W/kg in France and Europe.

These differences in the choice of parameters of the protocols have a substantial impact. We now have tangible evidence that can no longer be ignored by the regulators, by the manufacturers of mobile phones and even less by the public authorities. We are thus going to follow very closely the discussions in progress on both sides of the Atlantic.