Switzerland: Obstacles to the Introduction of 5G

Mobile telephony: The new technology is judged to be indispensable to our digital evolution. But there are many obstacles to its introduction. 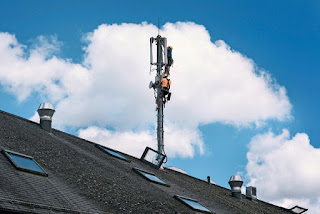 Photo : Installation of an antenna on the roof of an apartment building in Zurich. These antennas physically disturb a part of the population. Must we condemn them or replace them with another technology? Photo: Christian Beutler/Keystone

The Federal Council wants a Switzerland that does not have to be ashamed of its digital capabilities. In terms of telephony, the government wants to "place Switzerland at the highest level in international comparison," according to its statement when the strategy "Digital Switzerland" was adopted in April 2016. This was repeated on the Swiss Day of Digital Technology on November 21st. To achieve this, the Federal Council is planning the introduction of 5G on its territory, an operation that is faced with many obstacles.

In early November, the “seven Sages” [seven Ministers of the Swiss Government] allocated additional radio frequencies to introduce 5G technology by 2020 like other countries. Switzerland’s three major operators – Swisscom, Salt and Sunrise – are not celebrating. Switzerland has ten times stricter (lower) limit values than the European Union. The quota of non-ionizing radiation in urban areas has already been exhausted on more than 90% of existing base stations, and thus, it is impossible to install 5G on the already saturated antennas.

Disabling old technologies to give way to new ones, as was done for 4G (the 2G was then decommissioned), would also prove insufficient. "Today the demand for bandwidth is already exponential," says Swisscom spokesperson Christian Neuhaus. “On our mobile network, we are seeing a doubling of data traffic each year. By 2020, we estimate that Switzerland will have more than 200 million connected objects, mainly via the mobile network. New frequencies are essential to cope with this demand. "

Increasing the number of antennas is also not a satisfactory solution for both defenders of the environment and the economy: not only would the measure be costly, but it would also considerably slow down the process.

When in doubt, abstain

The solution would therefore be to relax the non-ionizing radiation protection ordinance (ORNI). "For the moment, Switzerland is not yet behind schedule, as the introduction of 5G is planned for 2020,” continues Neuhaus. “But it is clear that eventually we risk being left behind. There must be a discussion at the political level.” It has already begun in the Parliament. Last year, the National Council, supported by the Federal Council, accepted a motion along these lines. However, it was rejected by the Council of States in December 2016 after a lively debate. The subject of contention? The potential effects of increased waves on our health. A majority of senators took into account the concerns of part of the population. According to two polls conducted by the OFS (Swiss Federal Statistical Office) in 2011 and 2015, distrust of waves is shared by almost half of the Swiss. As to whether this fear is justified or not, the answer is not settled.

When in doubt, we abstain, stated the Chamber of cantons, much to the disappointment of the PLR (Free Democratic Party). "This ordinance is a big mistake. At the moment, Switzerland has no chance to accommodate 5G, deplores Christian Wasserfallen (PLR / BE). No international study has established the danger to health. Currently, the values ​​of ORNI are at 5 volts per meter. WHO recommends a maximum of 50. If we increase to 30, we would still be far from this recommendation. For the national councilor, these restrictions lead to a paradoxical situation: "The weaker the network, the stronger the radiation emitted by the cell phone and the more waves that penetrate the head. It's not politics, it's physics! "

Olivier Français (PLR / VD) is a at odds with his party on this issue. "True, there is no scientific basis, but we can monitor the effects of waves. It is a fact that the small antenna on my laptop produces frequencies that pass through my brain," says the State Councillor, who also knows about electrosensitivity. "There are people who are more sensitive than others, whose bodies eliminate these exposures less easily than others."

Olivier Français recognizes the importance and the inevitability of the evolution of technology. "It's fundamental. But it is also the responsibility of operators to find alternative solutions. We can very well relax the standards now, but with the evolution and the increase of data exchanges, it's very likely that the same problem will arise later."

This opinion is shared by the Federal Office for the Environment (FOEN), which for its part highlights the example of the city of St. Gallen and its wireless Internet connection (WLAN), made available free of charge to the public. In 2012, the Municipality installed forty WLAN antennas in the city center. The range of these is lower than the mobile phone antennas - it thus takes more to achieve the same effectiveness - but their radiation is significantly lower. Thus, despite the sharp increase in data volume since the project was launched, radiation has decreased by about a quarter. In case of capacity depletion, an additional WLAN transmitter can simply be added. As the power of these antennas is less than 0.1 watt, it is not necessary to have a permit to install or operate. According to the project leaders, long-term Internet telephony could be developed thanks to these antennas. In the medium term, large cities could eliminate many large antennas with intensive radiation.

Revolutionary! Great expectations rest on 5G. "The 5G technology allows much higher transmission speeds than anything we know today, but also very low latency," says Swisscom spokesperson Christian Neuhaus. For example, we are talking about debits four times greater than 4G and latency times of less than one millisecond.

"5G will allow the emergence of new applications in industry, manufacturing, mobility, logistics, agriculture, health and energy," continues Neuhaus. Today, the latency of 4G is about half a second. It seems little, but it's already too much for the control of self-driving cars, for example.

Such rapidity will thus enable the era of the Internet of Things, i.e. drones, connected homes, augmented and virtual reality, fire detection systems, alarms with regard to falls and traffic regulation in the event of accident. In short, meeting the demands of our future.

By 2030, specialists predict there will be hundreds of billions of connected objects in the world. 5G should not only be able to support these major expectations, but will also be more energy efficient. It should allow ten times more autonomy for some devices. Some objects could therefore last several days or even years for the most economical without being recharged (e.g. fire detectors).

In Europe, 5G is expected to make its appearance in 2020. But South Korea hopes to create a sensation by making it available at the Olympic Winter Games in Pyeongchang in February 2018.

The impacts of waves on health are a source of anxiety. But, for the time being, scientific opinions differ on their real magnitude. For the association Doctors for the Protection of the Environment (MfE), "there is more and more clear data showing that mobile telephony is a health risk". Based on several studies, the association suggests a risk of cancer and heart and brain tumors during intensive use. The Swiss Medical Association (FMH) wishes to await the publication of the World Health Organization (WHO) studies on this subject before taking any decision on the issue. "The FMH is encouraging the establishment of a non-ionizing radiation surveillance system and analysis of the results of research to study the impact of non-ionizing radiation on health," adds its president, Jürg Schlup.

A 2015 report of the Federal Council on the future of mobile networks in Switzerland states that "the warming of the body's tissues is the only harmful effect on human beings due to the scientifically proven radiation of mobile phones". There is evidence of an effect on the cerebral flux as well as "some evidence" of influence on cerebral perfusion, an adverse effect on sperm quality, and programmed cell death. "We do not know what the possible health consequences are, or whether there are threshold values ​​in terms of intensity and duration of radiation," the report adds. In order to clarify this issue, the government proposes launching a system of monitoring exposure of the population to radiation. For now, the necessary funding has not been found. WHO is expected to issue new reports in 2018.