Switzerland: Electrohypersensitivity: "With the Arrival of 5G, Where Would I Be Able to Live?"

Electromagnetic radiation: Three electrohypersensitive persons speak of their suffering due to radiation from antennas and Wi-Fi.  The arrival of 5G in Switzerland has become their greatest fear. 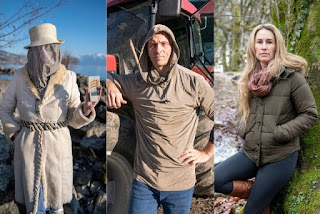 (Photo): Claire, François Ruchet and Eva Roethlisberger (from left to right) are going through hell every day because of their electrohypersensitivity, an affliction not recognized in Switzerland, unlike Scandinavia or Great Britain. Photo: Florian Cella

On the front door, a sticker of a crossed out mobile phone sets the tone. Only phones in airplane mode cross the threshold of Vincent Ruchet's house. The farmer from Ollon is EHS - electrohypersensitive. Electromagnetic waves are, for him, a potentially deadly enemy. An irony of fate for the person from Chablais, a former Nokia and Sony Ericsson technician: "Since then, the radiation of the antennas and Wi-Fi has caused me great suffering. The future 5G network will be a nightmare."

According to EHS advocacy associations, 800,000 people in Switzerland, or 10% of the population, are affected. In Sweden, where this problem is taken into consideration, it is also estimated that one in ten citizens is affected. In 2004, WHO recognized the reality of the symptoms, and in 2011, it integrated the radio frequencies of mobile phones and wireless technologies into the group "possibly carcinogenic to humans". In 2018, the French National Agency for Food, Environmental and Occupational Health & Safety concluded that "EHS symptoms and suffering are a lived reality".

The nightmare of everyday life

For Vincent Ruchet, his house is a refuge. Walls "shielded" with a graphite layer, a metal filter on the windows, a wired telephone, cabled Internet. Even his tractor is shielded. This aviation and martial arts enthusiast discovered himself to be EHS five years ago. "Overnight, I had terrible headaches when I woke up, nausea. I didn't want to eat anymore. I had to go for three days to a "mazot" [small chalet] where I revived. I came down and in three hours, it was hell again. There, I saw the Wi-Fi router 30 cm from my head..."

His measuring device is always at hand to calculate radiation values wherever he is. In the open countryside, one would be tempted to think that he is doing better than others. That's without counting the five antennas within a three-kilometer radius. There is no way out without his silver-threaded clothes ordered abroad at great expense, even if they attract attention. "I can't complain, I'm one of the few EHS people who can work".  He is one of the delegates from French-speaking Switzerland of the Association Romande Alerte, which supports and advises EHS persons.

A few years ago, when she discovered her intolerance to RNI waves (non-ionizing radiation), Lausanne's Claire* began a slow descent into hell: "I was working in applied arts and was very exposed to Wi-Fi radiation. In the presence of relay antennas and Wi-Fi, I suffer permanently from headaches, nausea, dizziness, tingling in the limbs and joint inflammation. My health has deteriorated considerably and my income-generating activities have had to be reduced. In Switzerland, disability insurance does not yet recognize EHS."

In case of too much exposure, she puts on her protective clothing, including an anti-waves veil. By the lake, she can recharge her batteries. In the city, her measuring device allows her to target the few places where radiation is limited between relay antennas, Wi-Fi, GPS, Bluetooth and WiMax. "With the arrival of 5G, where will I live?" she wonders.

Eva Roethlisberger finds her comfort in the woods of La Côte, in contact with trees. She was living in London in the early 2000's when the symptoms began to appear: headaches, fatigue, muscle aches and tachycardia. "I was a camerawoman. I spent hours doing video editing in the studio which probably made me aware. The reason I stopped working was because I was too ill. I was exhausted from my days."

She returned to Switzerland in 2011 and settled in La Côte where she currently lives in an isolated house in the vineyards. But a diagnosis of Lyme disease forced her to frequent hospitals and their corridors full of wave-emitting devices: "If I have to wait too long, I wait outside. Some doctors do their best to ensure that most of the consultation takes place outdoors. And I come and go, juggling my tolerance. Same in an airport or certain public places." For Olivier Bodenmann, an EPFL engineer, whose partner is electrohypersensitive, "Switzerland must recognize EHS as a handicap, as other European countries have already done (United Kingdom, Scandinavia)".

The specialist also calls for a downward revision of the limit values set out in the Ordinance on Protection against Non-Ionizing Radiation (ORNI). "Operators should also work to counter the harmful effects of their antennas, including through the creation of protected housing, and also provide for "white zones" without radiation."

"A moratorium on 5G"

Olivier Bodenmann pleads above all for a moratorium on 5G and a refusal to revise the ORNI in order to increase the minimum radiation levels "as requested by the operators' lobby". To raise public awareness, he is giving a series of lectures. "Why multiply the connection speed by another 50 or 100?  5G is the choice of a society that wants to be more and more robotic. To refuse to see the health risk is simply irresponsible."

"The waves have no smell or taste, but are everywhere."

Nathalie Calame, a physician in Colombier (NE), is one of the few to openly acknowledge the problem of EHS. Between Switzerland and France, she deals with about thirty cases.

Why are you one of the exceptions in the medical world?
Because the information does not come from above, from academic circles. I'm listening. I don't think these people are telling stories. It is difficult to diagnose electrohypersensitivity. There is a device in Paris, an encephaloscan, that shows variations in blood flow in the brain, with Dr. Belpomme, a reference in the field. There is an 18-month waiting period....

What do you recommend for your EHS patients?

I practice environmental medicine, homeopathy and naturopathy. I work a lot on detoxification of certain heavy metals, because I am convinced that there is a link with their presence in the nervous system. I also work with an occupational therapist who specializes in habitat management and I am in contact with researchers who are trying to develop solutions.

How does one become EHS?
I think these people have been exposed for a long time, living near devices and machines that emit waves. There is also an emotional factor, a stress factor. And potential co-factors, such as the presence of other diseases, like Lyme.

However, it seems difficult to do without the Internet.
Indeed. Above all, it is important to limit exposure. Choose the airplane mode on the laptop, turn off the Wi-Fi  when not needed, avoid it in children's living areas and schools. The waves have no smell or taste, we do not hear them, we no longer realize the flux that pass through us almost continuously. Why not go back to cabled Internet?

800,000 The number of people with EHS in Switzerland, according to their advocates. Sweden, which recognizes EHS as a disability, also estimates their proportion at 10%.

61 In volts per meter, the maximum radiation allowed by the International Commission on Non-Ionizing Radiation Protection (ICNIRP), the standard applied in Europe.

6 In volts per meter again, the threshold in Switzerland set by the ORNI for housing and living spaces.

0.6 The prevention threshold for long-term indoor exposures, according to Council of Europe Resolution 1815, which recommends "reducing it in the medium term to 0.2 volts per meter". 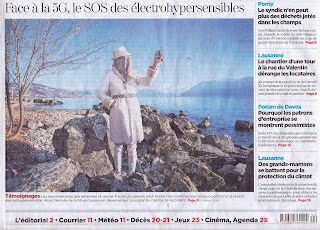