Captured Agency: How the Federal Communications Commission Is Dominated by the Industries It Presumably Regulates 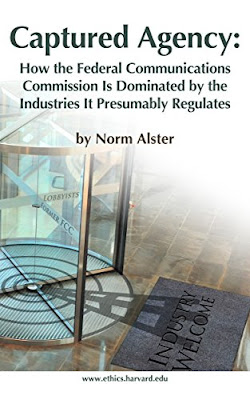 Ever wonder who really runs Washington? Ever have the sense that the agencies which are supposed to regulate industry actually report to it? Ever get angry that Washington lawmakers and regulators seem more interested in protecting corporations than in protecting public health?

If so, you will want to read this fascinating account of how corporate technology interests have won inordinate access to—and power over—a major regulatory agency. The Federal Communications Commission sits at the heart of a bipartisan Washington web of institutional corruption that has for many years championed corporate interests, typically at public expense. Echoing industry, the FCC has ignored the growing evidence that wireless technologies pose serious health risks. It has indirectly taxed consumers billions to pay for the pet projects of tech executives and lobbyists. FCC policies have enabled cable companies to charge the highest rates in the world while forcing consumers to pay for channels they don’t want.

How can all this happen in a system where elected representatives approve and supervise regulatory officials? An online survey conducted for this project suggests that corporate interests have a huge ally in public ignorance of their most damaging (but obscure) triumphs and tactics.